Welcome VS. System 2PCG fans! Today we have our first preview cards for the third Issue in the new Assemble Arc (based on the Infinity Stones): Mind & Soul. This Photographic Universe Issue features powerful female heroes and villains in the MCU (and their fraternal twins, if applicable). It features a massive eight new main characters to play (nine if you count that twin – you’ll see).

First up today, we have the Avenger herself, Black Widow. 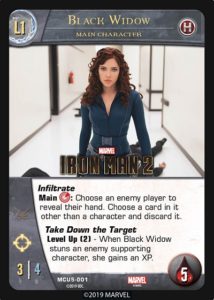 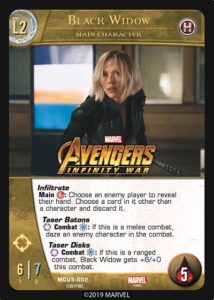 She would really like Taserface! On second thought, no, she wouldn’t. 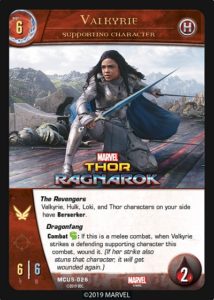 Dragonfang doesn’t care if she wins the fight, it is sharp regardless. But she deserves a main character! 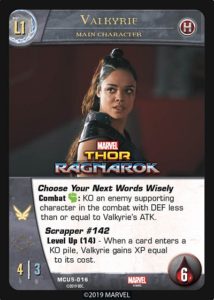 Note that Scrapper #142 doesn’t care where the card came from. However it enters the KO pile, if it has a cost of 1 or more, Valkyrie will get some XP. 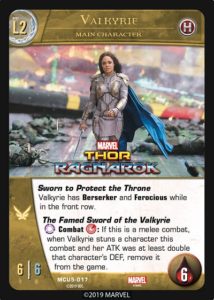 Can The Famed Sword of the Valkyrie remove main characters from the game? Yes, it can. Do they come back into the game? No, they don’t. Isn’t that powerful? Yes, she’s a Valkyrie.

If you recall, the last Issue featured only three of the four Children of Thanos. Here’s the fourth one! 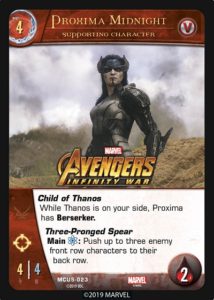 Let’s transition back to Wakanda, a country we visited in the last Issue. Remember when we asked who else might have Wakanda Forever! in those articles? Of course you do! 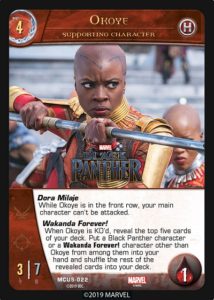 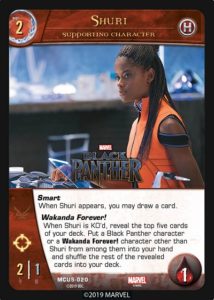 Okoye is one of our favorite characters, both in the movies and in the game! We can’t wait to make a Wakanda deck with the real cards!

Maybe this will be my main character… 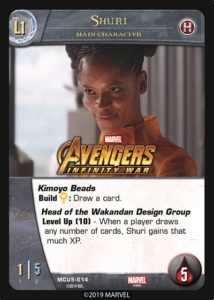 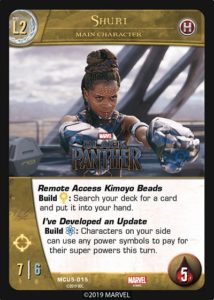 She’s been busy, upgrading her own powers and maybe everyone else’s too!

We hope you liked your first look at this Issue. Join us next time as we go higher, faster, smaller?

The Assemble story arc concludes this October with Vs. System 2PCG: Mind & Soul