Welcome back VS. System® 2PCG® fans! Today we have our third and final preview cards for the third and final Issue in the new Assemble Arc (based on the Infinity Stones): Mind & Soul. This Photographic Universe Issue features powerful female heroes and villains in the MCU (and their fraternal twins, if applicable). It features a massive eight new main characters to play (nine if you count that twin – you’ll see today). This is the last preview article for the Arc! 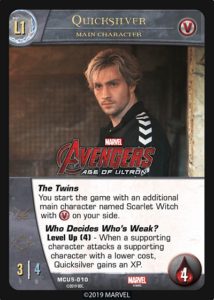 Dude, what are you doing here? I get that you’re fast, but why couldn’t you… 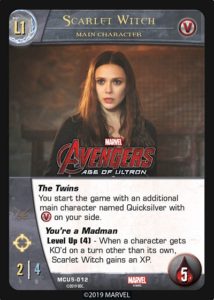 Note that both Level Ups can trigger on any turn. 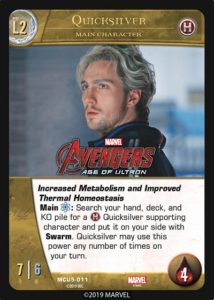 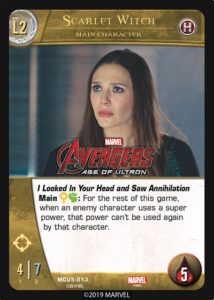 When a Quicksilver main character is KO’d, his supporting characters stay on your side (assuming Wanda is still around).

Note that Wanda’s I Looked In Your Head and Saw Annihilation doesn’t care if that character has used the power previously, but it does care about specific cards using a power, not character names. And yes, it works on main characters, and it lasts the whole game, even after she is KO’d (assuming Pietro is still around).

I wish it was Halloween, because we have both a witch and a ghost in this article… 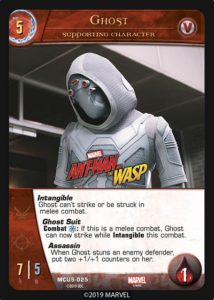 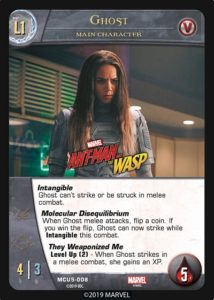 Her main character looks very similar to her supporting character, at least at Level 1. But her powers are a little less reliable. 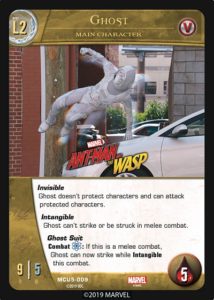 Just to be totally transparent, Invisible means that enemy players can ignore Ghost for the purposes of attacking back row characters on her side, and she can ignore enemy front row characters for the same purpose! So it’s fair!

Well, this is it folks! The last preview card for the Arc! But are there cards we didn’t show you? Maybe! 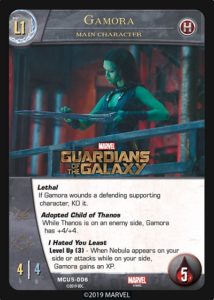 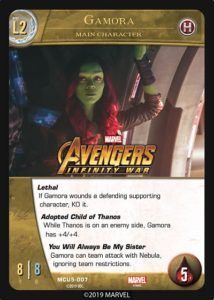 Wow, she does not like Thanos. I should have titled this article Sister Act. But it’s too late! The preview is over!

We hope you saw some cards you love, and these previews gave you some fun ideas! Come back soon for more VS. 2PCG previews and happy playing!

The Assemble story arc concludes this October with Vs. System 2PCG: Mind & Soul.