Welcome back VS. System® 2PCG® readers! Today we have our second preview cards for the first Issue in the new Assemble Arc (based on the Infinity Stones): Power & Reality. This Issue features heroes and villains from our very own home planet. Let’s take a trip to the home country of the Avengers!

First up we have that noblest of birds – the Hawk! 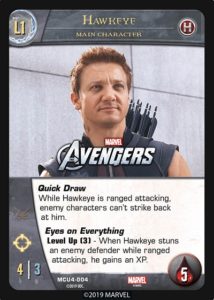 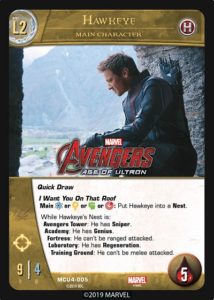 OK, what the heck is a Nest? Well…when you spend a power symbol from a Location in your resource row to put Hawkeye into a Nest, you put the Location card partly underneath him and leave it face up as the Nest. (Note that if you pay for the power by discarding a Location or you reduce the cost of the power to zero power symbols, nothing happens.)

Next up we have Clint’s ‘boss’… 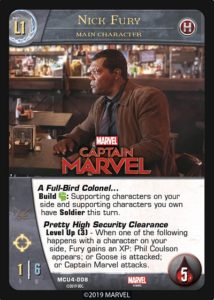 Spoiler Alert! Oops, too late! There’s gonna be a Goose and a Captain Marvel character in a future Issue in the Arc. Probably not surprising.

Remember that when a Soldier appears, put -1/-1 counters equal to the number of Soldiers on your side onto an enemy Supporting Character. Play lots of people with Fury! 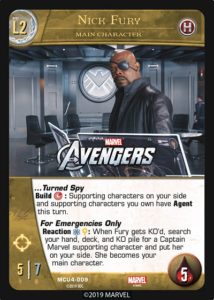 You may recall that when an Agent appears, you look at cards from the top of your deck equal to the number of Agents on your side. Put any of those cards on the bottom of your deck and the rest back in any order. Continue to have lots of people in your Fury deck!

They say behind each spymaster stand a bunch of spies. Here’s one now! 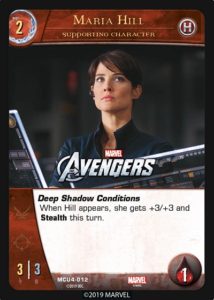 Stealth means she can melee attack back row characters even while they’re protected. Powerful!

You know the old saying – spies plus armored suits make the world go round! 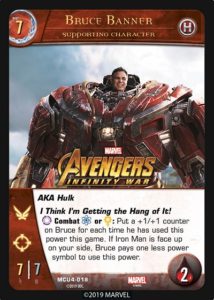 There he is, ironically, in all his Hulkbuster glory!

But Bruce isn’t using the only Stark-designed suit out there. There are lots! But they require focus and fidielity. 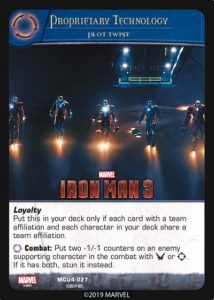 Well, there you have it! Join us next week as we head across the pond to Europe!

Collect the Assemble Arc starting with VS. System® 2PCG®: Power & Realty this August.