There is a tremendous amount of excitement for the release of the first esports trading card product, the 2019 Upper Deck Overwatch League set, on Wednesday, June 19. We sat down with Travis Rhea, Upper Deck brand manager for entertainment cards, games, and the UD Gallery to get a behind-the-scenes look at everything that went into bringing this historic set to market. 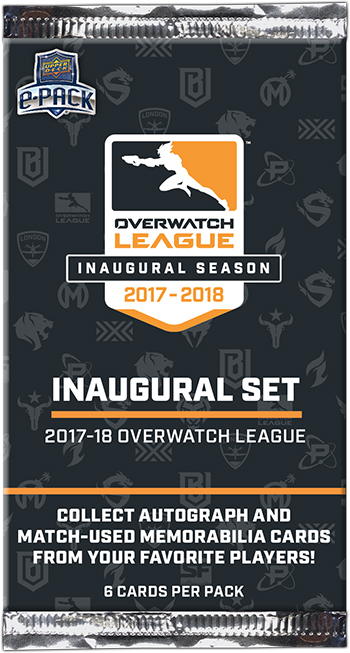 Upper Deck Blog: How did the idea for this product come to be?

Travis Rhea: Upper Deck was founded on being innovative. You see a lot of innovation with the products we bring to market, but we also want to be innovative with the types of products we bring to market. We always have an eye on the future and seeing the growth in esports caught our attention years back. It’s something we’ve been watching, and we felt it was time to provide fans of esports with a quality trading card release of the players rather than just the characters in the game. Working with the team at Blizzard and the players themselves, it’s been really an amazing process to bring this historic set to life.

Upper Deck Blog: Overwatch League isn’t the only esports league. Why did Upper Deck choose to go with them?

Travis Rhea: I think what really impressed us about the Overwatch League is just how professionally they are run. Many of their executives have experience from professional sports leagues and they’re bringing over and implementing strategies for success here. They have a blueprint in place to grow the category and attract more fans, and that’s something we want to be a part of. We got to spend time at Blizzard headquarters the day before the launch, making personalized cards of their staff, and it was clear to see their passion for Overwatch. We are very excited for what the future holds with this agreement!

Upper Deck Blog: What did the design staff think about working on esports instead of traditional sports releases?

Travis Rhea: There was a lot of excitement about it when they were made aware, but we operated under a shroud of secrecy internally for some time as we didn’t want word to get out we were producing a groundbreaking product like this until we were ready. We have a very diversified portfolio for trading cards and do a lot more than just sports cards. Upper Deck produces comic- and movie-based trading card products and games for entertainment, so our designers can easily adapt to the subjects they are working on. There was a small learning curve, but they enjoyed the challenge and put together a great product. 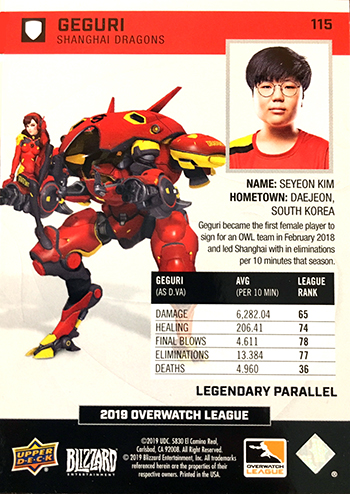 Upper Deck Blog: What was it like seeing these cards come off the press?

Travis Rhea: It was very exciting, but like anything you do that is new, there will be small errors or issues that come up. It’s similar to some of the variations and anomalies we had when we released our flagship 1989 Upper Deck Baseball, which had a few unique cards and variations. We became aware of some variations in this set as well during the production process, and they will be characterized as error cards, some of which will have corrected versions made for a later release.

Here is a look at these error cards:

2019 Upper Deck Overwatch League Card 114: Tobi is seen in both images. There will be a corrected version of the Gambler card produced later, which means this first card will be a limited release. 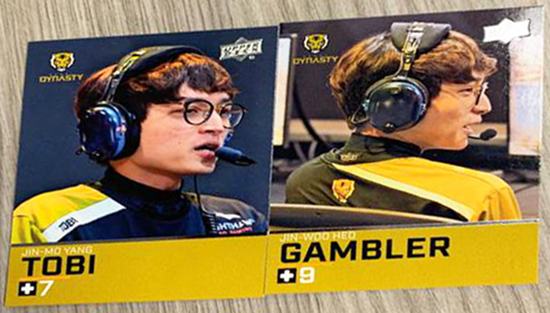 2019 Upper Deck Overwatch League Card 173: The Fuel are mistakenly referenced as the Outlaws in the fourth line of text. There will NOT be a corrected version of this card produced. 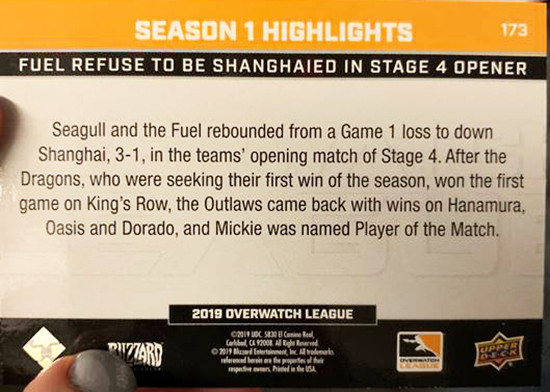 2019 Upper Deck Overwatch League Memorabilia Cards: We acquired a variety of player-worn league apparel to be used for memorabilia cards in the set, but the copy on the back references the cards as match-used when that is not the case for all cards. We do have match-used memorabilia cards from the Los Angeles Gladiators and the Boston Uprising, and the other cards are from player-worn memorabilia. 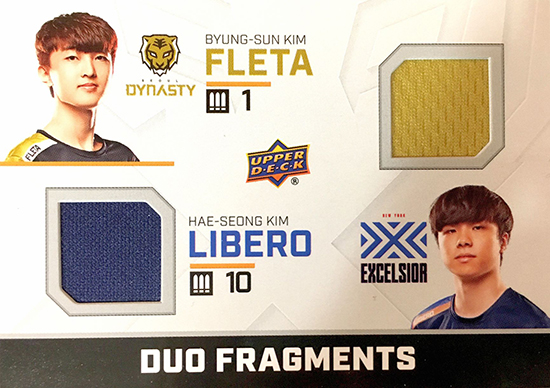 Upper Deck Blog: Well what do the cards look like? Can we see some?

Travis Rhea: Check these out! 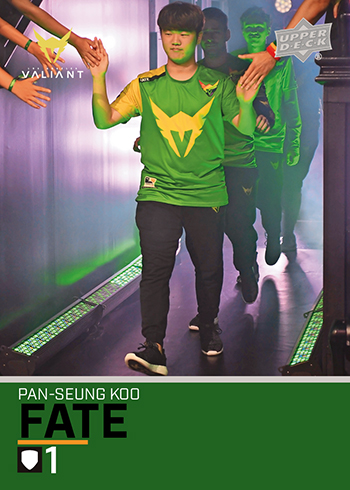 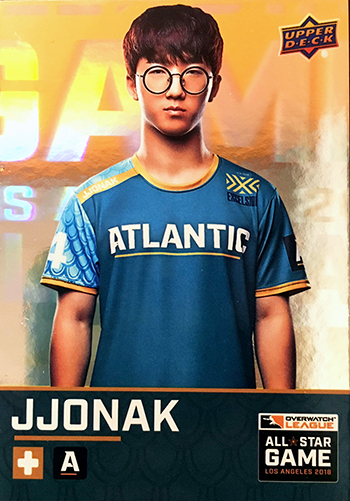 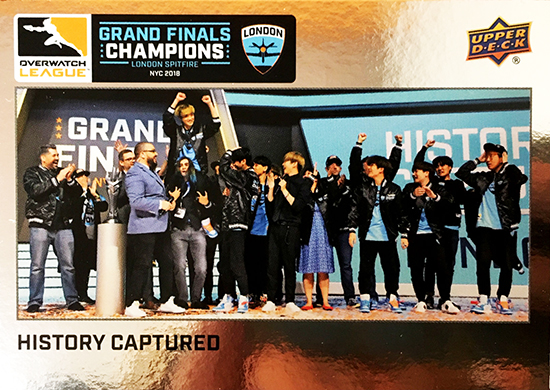 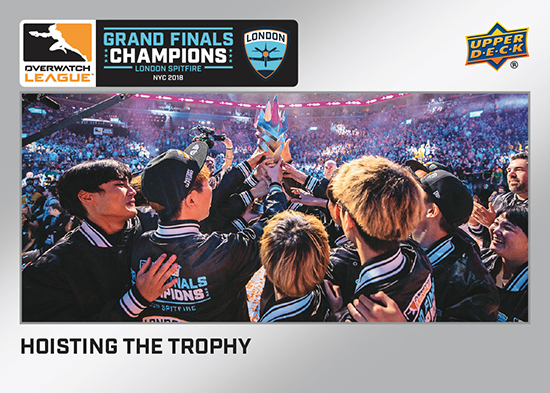 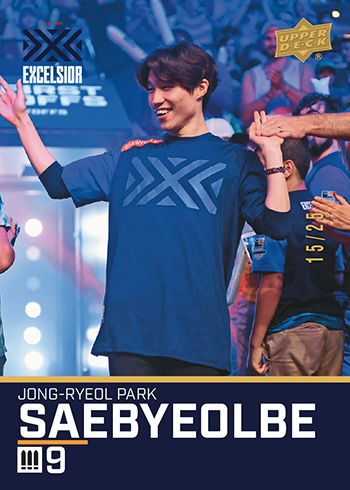 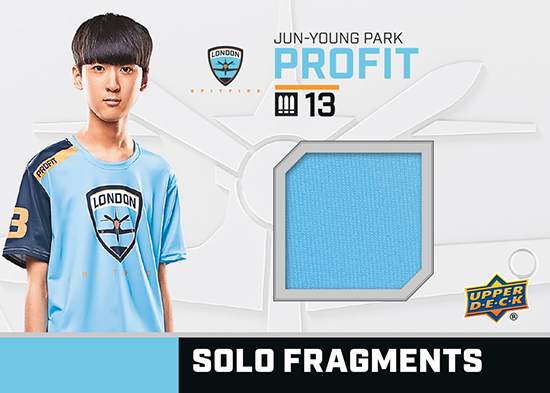 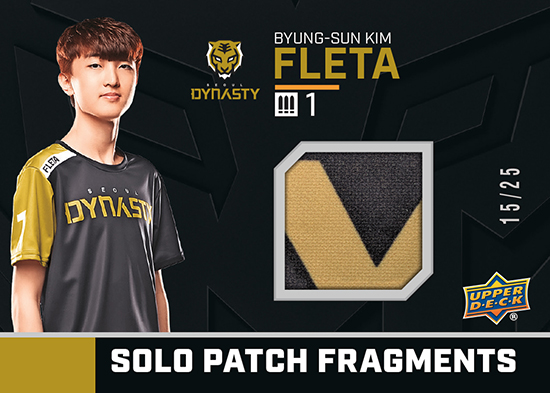 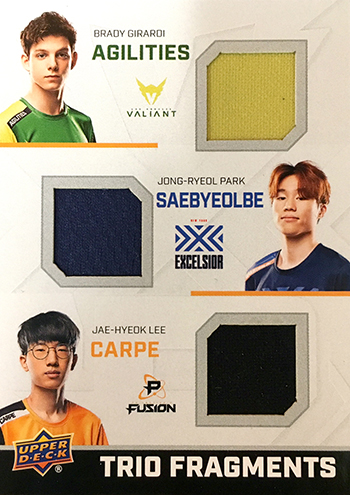 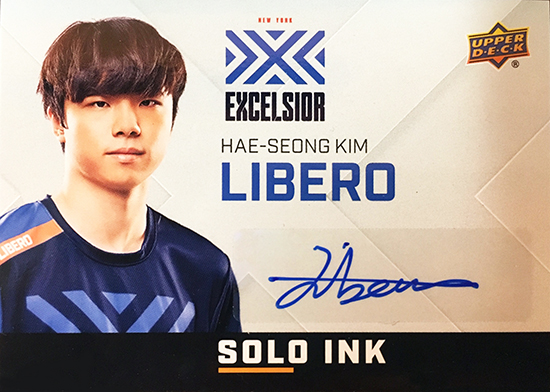 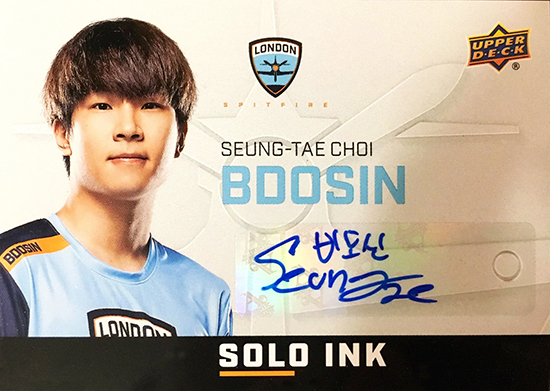 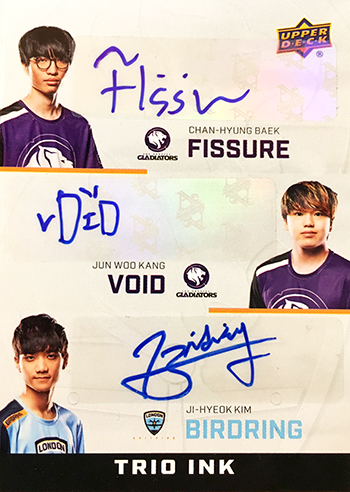 Upper Deck Blog: Upper Deck previewed these cards at Overwatch League All-Stars a couple weeks ago. What was the response like?

Travis Rhea: For fans to see Upper Deck trading cards of their favorite players was like a moment where they said, “We’ve arrived!” We saw Overwatch League fans with ear-to-ear smiles when they got their first look at the cards and held them in their hands. They were excited about collecting their favorite players and teams, but there was a lot of excitement about the shiny inserts, which are just the tip of the iceberg for the awesome variety of cool insert cards that fans will get the chance to score when the set launches on June 19. There was a TON of buzz about these cards at All-Stars!

Upper Deck Blog: These cards will be available on Upper Deck e-Pack™, the company’s patent-pending online trading card platform. What is e-Pack, and how can a fan score these cards through the platform?

Travis Rhea: Upper Deck e-Pack allows fans to open packs, boxes, and cases of cards any time of day, anywhere in the world, through their smartphone, tablet or computer. There are digital and physical cards that can be found in packs, and through the e-Pack platform (UpperDeckePack.com), fans can trade with other collectors around the world. There are message boards to chat with other fans and achievement bonus items that can be earned by completing sets. Physical cards are stored for customers for free, but should they wish to have cards sent to them, they can do so for a nominal fee. The platform is user-friendly and a lot of fun for collectors to use. I think Overwatch fans will love the experience as they are already very tech-savvy.

Upper Deck Blog: What else is cool about Overwatch League trading cards on Upper Deck e-Pack?

Travis Rhea: There will be a very robust achievement program for Overwatch League (our most ambitious to date) where fans can score some unique items for putting together different sets. These achievement cards include six-player autograph or memorabilia booklet cards and oversized relic shadowbox cards that contain player-used mice, keyboards, or even CPUs from one of the onstage gaming rigs! You can even complete achievements to get autographed jerseys. This product is full of many different ways to collect through the achievements program. Check out details at https://www.upperdeckepack.com/News/Index. For fans just getting started, the tutorial section will help answer a lot of questions as well: https://www.upperdeckepack.com/Help/Tutorials 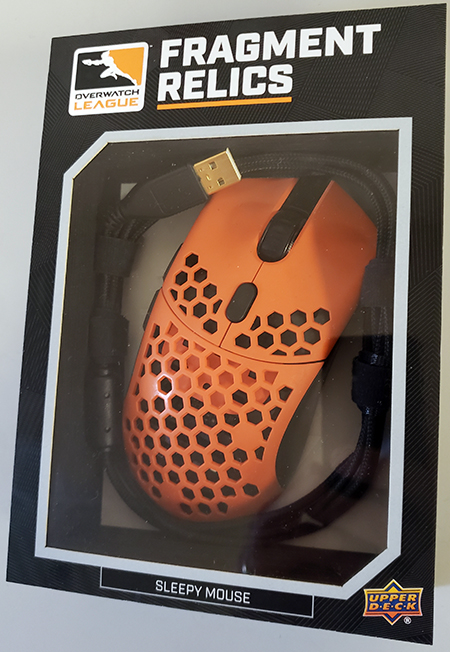 Upper Deck Blog: Fans are likely going to take to social media platforms to talk about their experience with Upper Deck Overwatch. What’s the best way for them to reach out and share their stories?

Travis Rhea: Fans should definitely use the #CollectOWL hashtag when chatting on social media platforms. Here are the Upper Deck accounts fans should follow and tag in their posts as well:

Fans can also chat with each other on the message boards at UpperDeckePack.com!