Home to Orrin’s Wall, part mountain, part fortress, Orrin’s Citadel is the gateway through the Burning Mountains. Named after one of the oldest families in Alamyth, this stronghold was created to guard the two main thoroughfares that allow access west into both the Firelands and the desert known as The Void. These passages include the Scorch Pass over the mountains and the Cryptic Caves through the mountain.

This ancient Citadel’s foundation runs deep, with numerous uncharted catacombs that lead deep into the mountain. This makes it troublesome for Orrin’s Wall as they are constantly pushing back the Goblin Horde that reside within the Burning Mountains.

Led by Lord Cedric, the Citadel’s people are known for their strength, nobility and loyalty. Most have a strong affinity to the Citadel and to the Burning Mountains. The magic around the Citadel draws its strength from the mountains and therefore tends to take on its attributes. 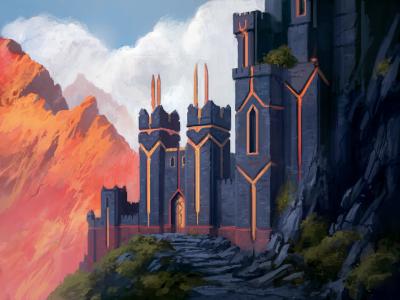