The Lore of Legendary DXP: Ide, The Life Taker

This week we will go into some detail about Disaray and his bond with his bow, Ide, The Life Taker

Disaray spent the first part of his life as a peaceful Wood Elf living with his family deep in the Enchanted Forest. However, this changed the day his land was invaded by the Sentori Horde. Desperate to save his family from the invaders, Disaray made a dark pact with Nax, the dark Shaman from the Crimson Bog. An act that would consequently change his life forever. 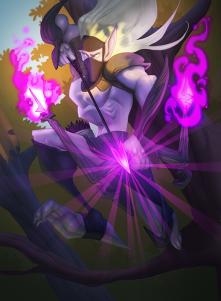 Nax provided Disaray with an enchanted bow fiendishly named Ide, The Life Taker. Ide is a bow of immense power, but with each use it indiscriminately syphon the life-force of those nearby, all while transferring a portion of this power back to Nax. Unknowingly, Disaray was draining life from those around him to make Nax more powerful. Upon learning this terrible truth he stopped using the bow, however, when Ide was idle, it began reaching out and syphoning life-force on its own.

While Disaray turned to his friends, Makea and Kamina, for help, even their combined power was unable to break the curse. However, they succeeded in redirecting the syphoned life-force back to Disaray by bonding the Elf and Ide together, becoming one spirit. Not only did this alter Disaray’s physical appearance to closer match the bow, but they also now share Ide’s need to feed on life force.

Now residing in exile deep within the enchanted forest, Disaray is forever bound to Ide, The Life Taker. Unsure of the temptations that may arise with his new cravings, Disaray keeps watch over his family and friends from afar to ensure their safety. And while Ide’s need to feed will never end, Disaray can now dedicates his life to directing this hunger in the right direction.


Heroes and villains from DXP had solid designs, but it always bothered me that they didn’t have their own story. I mean they can’t be anything more than their Marvel counterparts without them right? I will remember Disaray as Disary, instead of Cyclops.

Thank you for adding more flavors to the DXP.