As the regular season and playoffs wrapped up for the Canadian Hockey League and its member clubs battle for the Memorial Cup, collectors everywhere are starting to pay even more attention to junior ranks in anticipation for draft day and beyond.

Upper Deck is allowing fans everywhere to bring some of this excitement home with the release of 2018-19 CHL Hockey. This massive 400-card set includes players that have already been drafted, diamonds in the rough, and tomorrow’s hottest prospects. After last year’s successful debut release, the hobby is excited to see this edition on store shelves and on Upper Deck’s e-Pack platform. 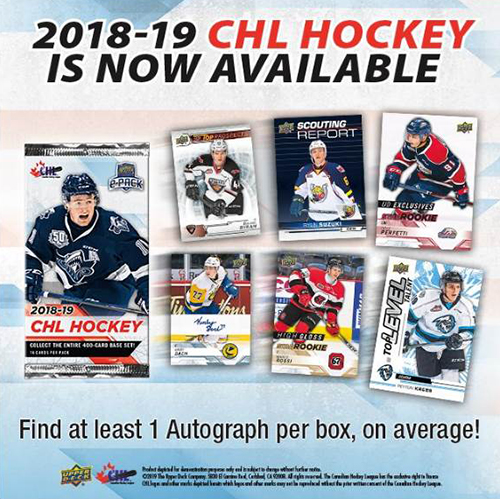 When NHL Central Scouting released its most recent list, the “Dub” dominated for North America-based talents. Led by some potential high selections in Peyton Krebs (Kootenay Ice), Kirby Dach (Saskatoon Blades), and Dylan Cozens (Lethbridge Hurricanes), there are plenty of promising names that will be popping out of packs. The WHL has a reputation for producing tough and skilled defenders and the Class of 2019 will introduce many fans to names like Bowen Byram (Vancouver Giants), Kaedan Korczak (Kelowna Rockets), and Matthew Robertson (Edmonton Oil Kings) to go along with forwards Brett Leason (Prince Albert Raiders) and Nolan Foote (Kelowna). 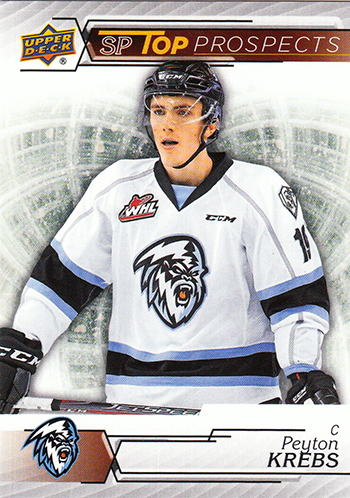 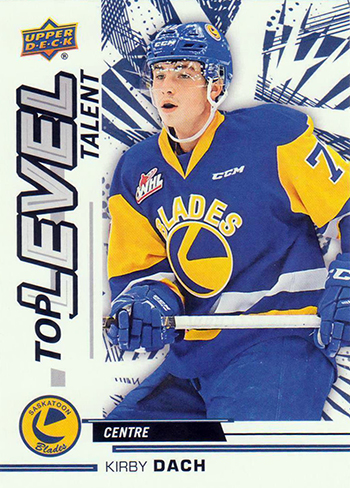 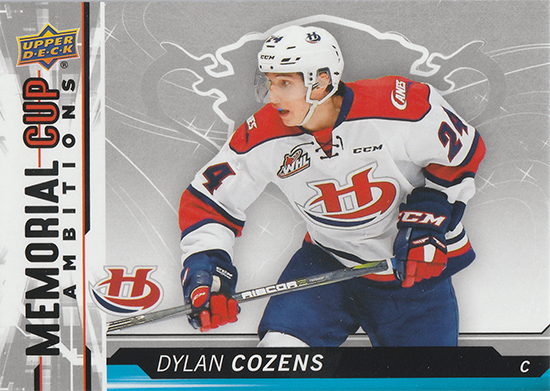 Some of these players debuted in last season’s Star Rookie subset and this year, the popular collection once again makes up the last 100 cards in the base set. There are a pair of new WHL arrivals to consider adding to your collection in Rockets blueliner Lassi Thompson and Oleg Zaytsev of the Red Deer Rebels. Both of these players could hear their name called in the first three rounds. 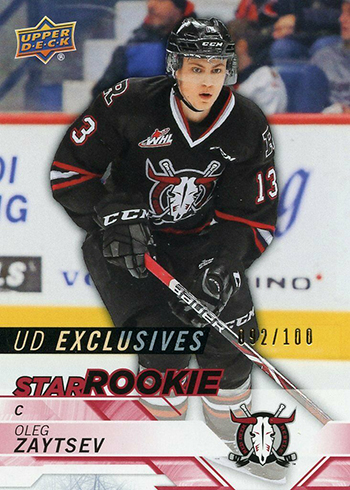 Moving eastward to the OHL, there are a few young stars in the making that are worthy of collector consideration. Thomas Harley patrols the blue line for the Mississauga Steelheads and has crept into the top 10 for North American skaters. He looked strong at the 2019 CHL/NHL Top Prospects Game and nearly quadrupled his production over his first OHL campaign. Ryan Suzuki (Barrie Colts) hopes to join his brother, Nick, at the pro level one day and showed offensive growth as a sophomore, too. 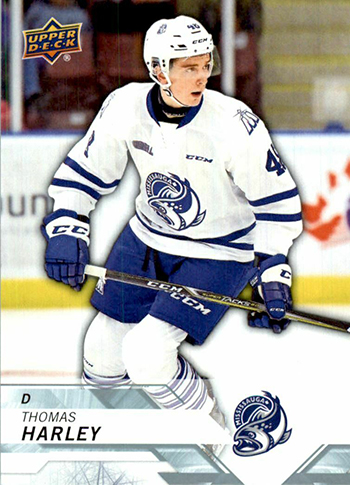 The most polarizing prospect for many in the 2019 NHL Draft will be Hamilton Bulldogs forward Arthur Kaliyev. He had an excellent 31-goal rookie campaign in 2017-18 and won an OHL championship. In 2018-19, he turned his production into overdrive and lit the lamp 51 times on top of cracking the 100-point barrier. There are some aspects of his game that scouts both love and hate, but if he can develop into a prime talent, collectors that get his cards now will be smiling. 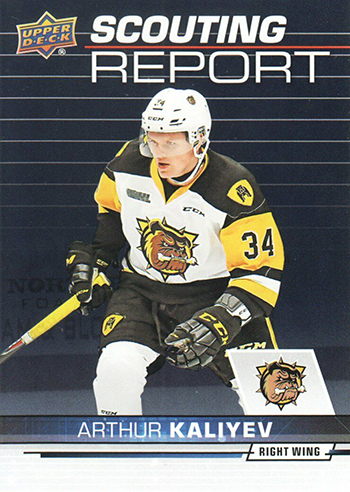 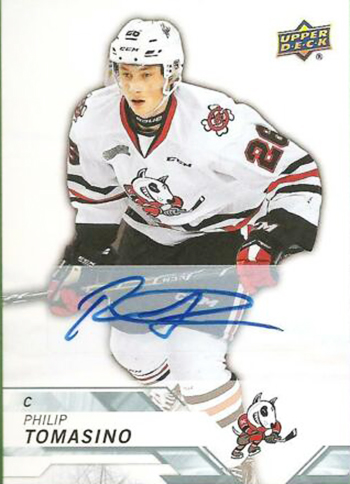 The QMJHL also has some 2019 eligibles worth examining and it starts with Raphael Lavoie (Halifax Mooseheads). He loves to score and put a bit more emphasis on racking up assists this season. 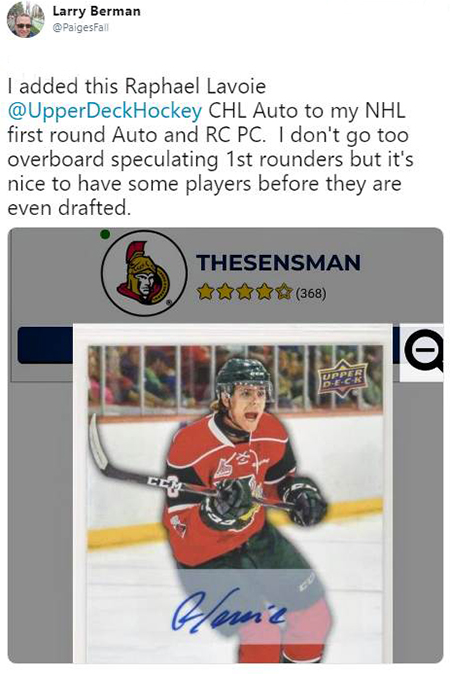 One prospect that seems to get overlooked at times is Jakob Pelletier of the Moncton Wilcats. After 65 games in 2018-19, he had 89 points to his credit and he might even squeeze into the later part of the first round – especially if he has a strong playoff. 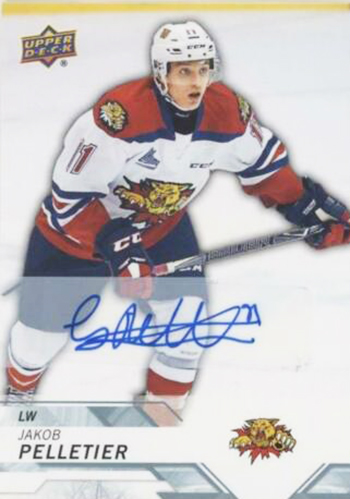 Some of the most prominent QMJHL prospects that also made it into the base set are Samuel Poulin (Sherbrooke Phoenix), Nikita Alexandrov (Charlottetown Islanders), and Nathan Legare (Baie-Comeau Drakkar). The trio of Artemi Kniazev (Chicoutimi Sagueneens), Maxim Cajkovic (Saint John Sea Dogs), and Valentin Nussbaumer (Shawinigan Cataractes) will be depicted on Star Rookies cards. 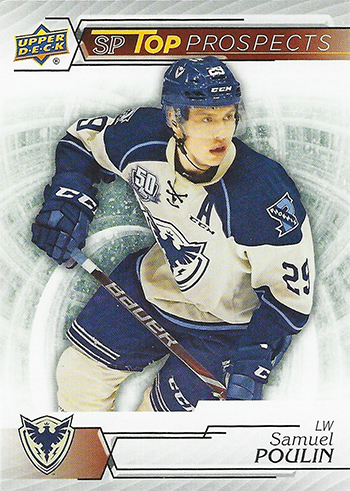 Looking toward the future, there are plenty of big names destined for selection in the 2020 NHL Draft which make their major cardboard debut in 2018-19 CHL Hockey. By far, the best known to collectors and fans already is Rimouski Oceanic star Alexis Lafreniere and he leads off the base set with card number one. You can also get in early on the excitement for Lafreniere with exclusive autographed items from Upper Deck Authenticated. 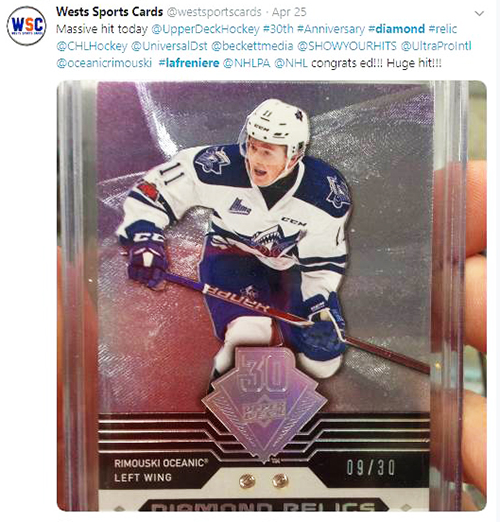 From there, there are plenty of names that cardboard prospectors will want to dig for. Justin Barron (Mooseheads) is part of the lower-numbered cards and there a few standout Star Rookies which could blossom into greatness and include Quinton Byfield (Sudbury Wolves), Cole Perfetti (Saginaw Spirit), Kaiden Guhle (Raiders), Connor McClennon (Ice), Jamie Drysdale (Erie Otters), Jacob Perreault (Sarnia Sting), Marco Rossi (Ottawa 67’s), and Jean-Luc Foudy (Windsor Spitfires). 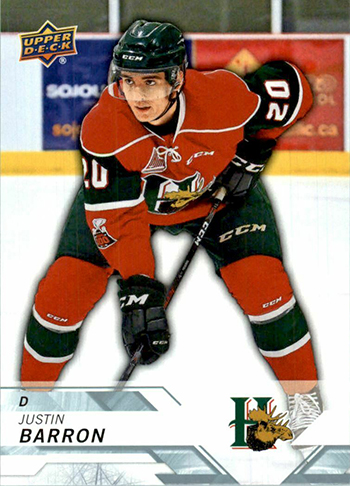 Finally, we can’t forget the men between the pipes and the hobby may end up buzzing about Toronto Maple Leafs prospect Ian Scott, who had a fantastic season with Prince Albert. Another netminder for collectors to watch out for is Sudbury’s Ukka-Pekka Luukkonen –  a 2017 second rounder who is property of the Buffalo Sabres that was also named the OHL’s Player of the Year. 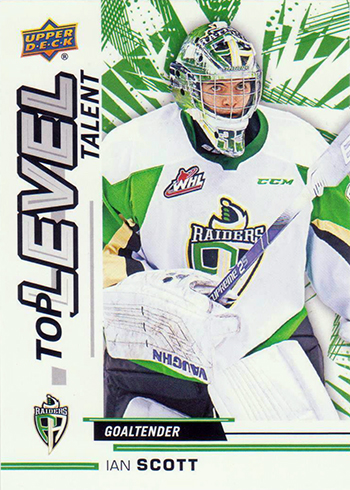 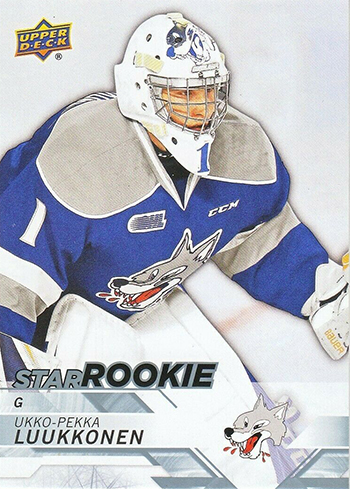 Whether you’re a loyal CHL fan or a collector that loves to prospect, 2018-19 CHL Hockey brings you the game’s best young talents before they become household names. This year’s collection has plenty of potential and definitely serves as a great introduction to the future of the game. Grab some packs today at your local hobby shop or on UpperDeckePack.com!