Dark Legacy: The Rising – The Scroll of Ascension

Titan is engulfed in a desperate struggle. Six factions strive to become
the rulers of Titan, a planet ravaged by centuries of war. To survive, you
must join the fight. The time has come to make your choice! Your journey
to power is long, but as the Scroll of Ascension says, “Twenty steps to
power must begin with but one step.” Danger and hardship will be your
constant companions. There will be many difficult choices to make on
your way to dominance. The annihilation of your enemies awaits and,
perhaps… control of all Titan. Before you begin you must first gather a
few things. Sure, you’re only Level 1 so you may not have a lot to choose
from but what self-respecting quester would be caught without at least a
small book of spells, a few creature companions, a satchel full of bombs
and perhaps a trusty battle dagger shoved in his boot. Now, head on
over to the guild hall and armory and start building your deck. It must be
at least 50 cards. Remember to build your deck with your current skill
level in mind. No use grabbing that war hammer if you don’t have the
strength to lift it yet. Be patient. Your time will come!

You head out into the forest to begin your quest. You feel ill prepared for
what may lurk in the shadows but press on. Hearing rustling ahead,
you’re hit with an odious stench. You prepare to meet the Ogre that must
be near. “Should I use my weapon and attack, or prepare to cast a
spell?” you consider. You decide to cast. The Ogre charges, but you
throw a smokescreen. You have just enough casting energy to hit him
with blitz, leaving only his charred remains. “Let’s go find your master and
have a ‘chat’,” you think. You see a robed figure on the edge of a clearing.
You’ve found your quarry, an Earth mage! No time for subtleties now. You
leap to the attack! You and the Mage are locked in mortal combat, both of
you giving as good as you get. You begin to think you may have taken on
more than you can handle when, with a desperate
lunge, your battle dagger strikes home! A critical
hit! Your foe slumps to his knees, vanquished!
Defeating the Mage and his Ogre gives you some
valuable experience.

Your first win and you’re already Level 2! You now
have access to more powerful equipment and spell
cards. It’s time to add them to your deck before
continuing. Each battle, win or lose, will add to your
experience and each skill level you gain allows you
to add new and more powerful cards to your
arsenal. In addition, each newly acquired level
gives you a skill bonus! Now get back out there.
Your destiny awaits! 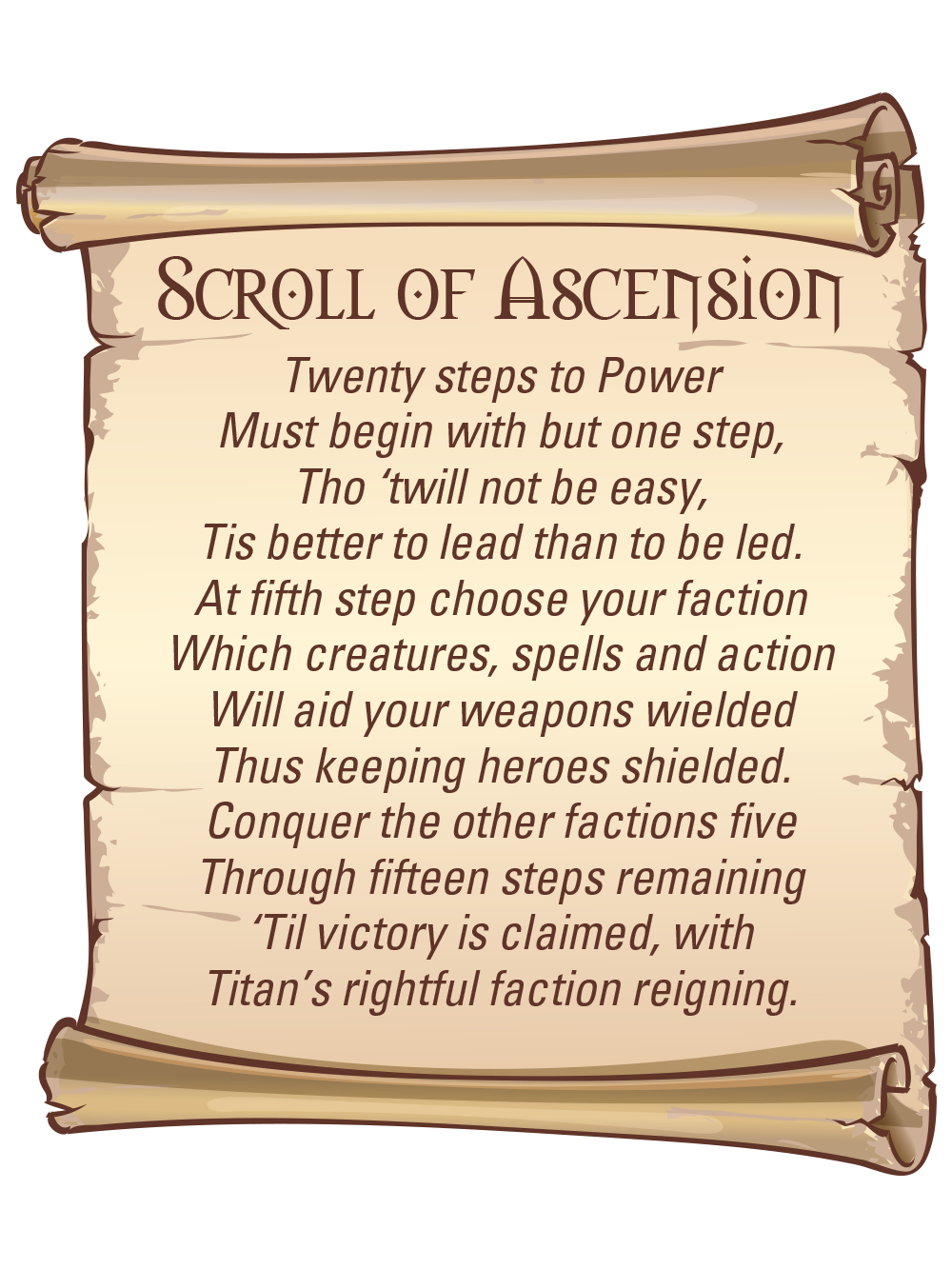 As you travel, you remember recent battles,
laughing to yourself about defeating the
unconquerable Windmill Knight and how no one
believed that the Irritable Abbot could be
outsmarted. “Not so green anymore, am I?” you
think to yourself…Spotting a campfire, you step into the clearing. A
figure huddled near the fire beckons you to sit. “Terra’s my name,” she
says, “and the bear over there is Whisper, and we’re on a quest to
Nemril’s Keep. I’m going to apprentice as a druidess with Evinrude the
Monk, a scholar who studied with both the Earth and Divine factions.
What about you?” she asks. “Science comes naturally to me,” you say
“Turns out you can harness the power of Titan to run all manner of things.
So I’m joining the Tech faction. Mark my words, I WILL rise to the top so I
can fight Chaos and Kaiser!” Terra gives you a lopsided grin, “You got
guts. I’ll give you that!” …At dawn, your junkbot signals a perimeter
break. Terra is already awake, listening intently for the intruder. You
check your handgun instinctively then sling your hammer over your
shoulder. Terra goes left, following her bear as they disappear over a hill.
Cresting the hill, you find multiple skeletons engaging the druid and bear
in battle. Terra uses her short sword to dispatch skeletons, but they keep
regenerating. You click your spectacles to thermal vision to scan for the
Necromancer commanding them, spotting him at the edge of the forest,
shimmering in an unholy light. “Terra has chosen to attack, but I think a
little Tech magic is required. Let’s light him up!” You change your glasses
to laser eyes mode. Lasers blast from your spectacles stunning the
Necromancer. Suddenly it is hard to see your enemy as he casts
Darkness. “Not so fast,” you think, throwing a counter spell. As his eerie
glow reappears, you charge wielding your fiery hammer, achieving a direct
hit, dispatching him! …Without warning, you’re blindsided. Reeling, you
see a Berserker brandishing dual battle daggers. In one fluid movement,
you draw your handgun, emptying the clip. “I’ve had quite enough of you!”
you yell. He falls dead at your feet. Terra and her bear, no worse the wear,
jog up. “Always nice to start the day with a little exercise,” she quips,
punching you in the shoulder, “Nice spell work! We make a good team.
Wouldn’t mind some company on my way to the Keep.“ 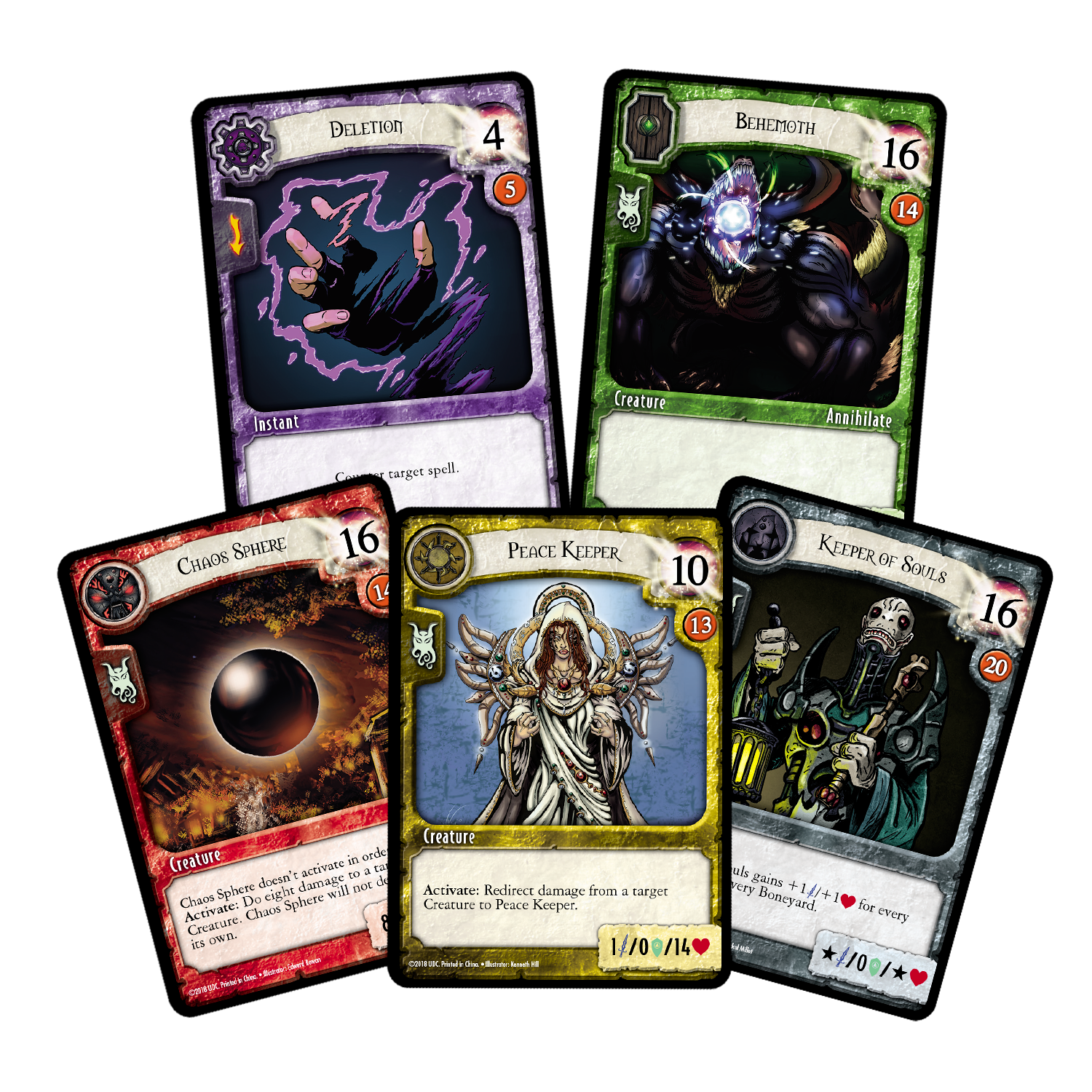 Congratulations! You’ve done it! With that victory you’ve gained enough
experience to reach Level 5! The time has come. You must choose a
faction. Science and Technology have served you well so you decide to
follow the purple banner of the Tech faction! However, there’s a price for
your allegiance. Once your choice is made you may only play general
cards and cards from your chosen faction so some cards will have to be
set aside. Don’t worry. Level 5 contains some powerful replacements!
Maybe you’ll add creatures like the mighty Metal Colossus. Perhaps you
will be more elusive using cards like Prophecy Eye and the Necklace of
Knowledge to outwit your foes. Not your style? Then maybe just blasting
your enemies into oblivion with a shotgun is more your thing! Time to
rebuild your deck, have fun!

You now carry the Surge Shield proudly as a member of Tech. Your
victories mount. You send foe after foe down in defeat. It’s not always
easy and you have the scars to prove it, but you are known far and wide
as a mighty warrior. ….Striding into battle, you raise your long sword to
signal the charge. Your enemy, a Valkyrie, casts cyber wings and soars
out of reach. You cast levitation on a techbear
and the fight ensues midair! The Valkyrie then
summons a multitude of winged creatures,
screaming, “Death most certainly rides on
feathered wings!” You stand facing the
onslaught, and smile. You cast a grounding blast
spell that causes the Valkyrie and her entire
army to plummet to the ground where your
creatures fall upon them mercilessly. The
Valkyrie, now broken, is defenseless… you
show no quarter!

You’ve reached Level 10, a major milestone! You
may now pick a second faction, which gives you
access to all of the cards of that faction, as well.
Sure, it will be at Level 1 for now, but you can
use your charging slot to cast some of the
higher skill cards. You’ll find that adding the
cards from a second faction will make your deck
much more formidable! Level 10 also adds more
to your pool of cards. You can even equip
yourself with a flame thrower! 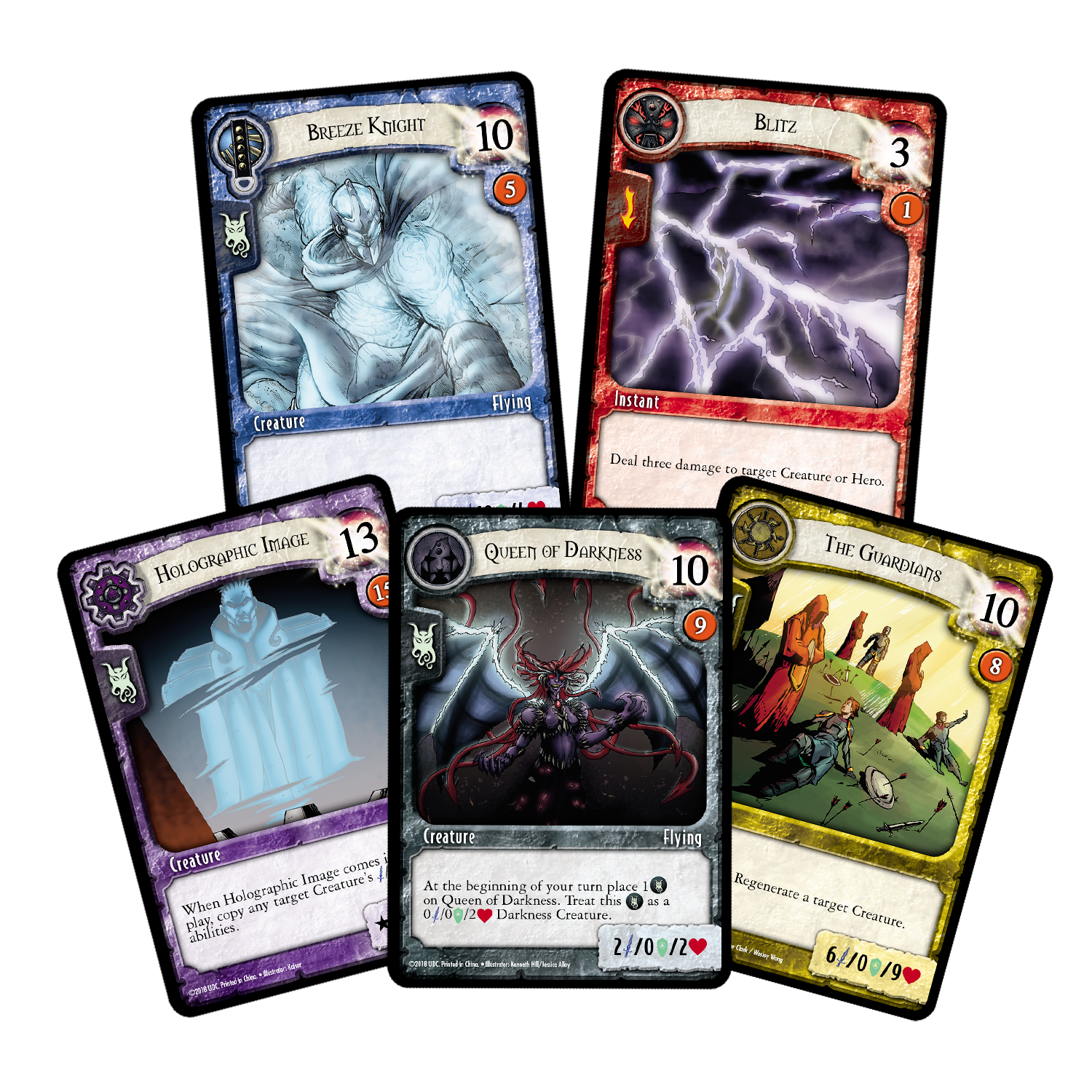 Now a stronger, broad-shouldered man stands confidently in the place of
that young quester who crossed paths with the Druid years ago. Looking
across the battlefield, strewn with the fallen, you spot Terra, who nods in
recognition. Thinking back, you smile, and salute. You both know you now
must fight. You sigh, “Sorry, old friend, your journey ends here.” Knowing
your prowess on the field of battle, a cautious Terra opens fire with
magic. The very ground comes alive with rolling earthquakes and rock
spikes. Landslides threaten, while meteor showers pelt the terrain.
Hurriedly, you use virtual camouflage in an attempt to mitigate the
damage. “Terra must take me for nothing but a brute,” you think. Pulling
Nemril’s ancient spell book from your satchel, you begin to match Terra
spell for spell. Earthquakes and Blizzards, Tornadoes and Firestorms
rocket back and forth for what seems like an eternity. Finally, Terra is
spent. She collapses on the field. She kneels and offers you her sword,
swearing her loyalty.

With each victory you gain more experience. All that’s left now is to keep
pressing forward, gaining additional skill bonuses and adding to your
card pool. Surely there can be no stopping you in your quest to reach
Level 20 now! Control of all of Titan now seems within your grasp! 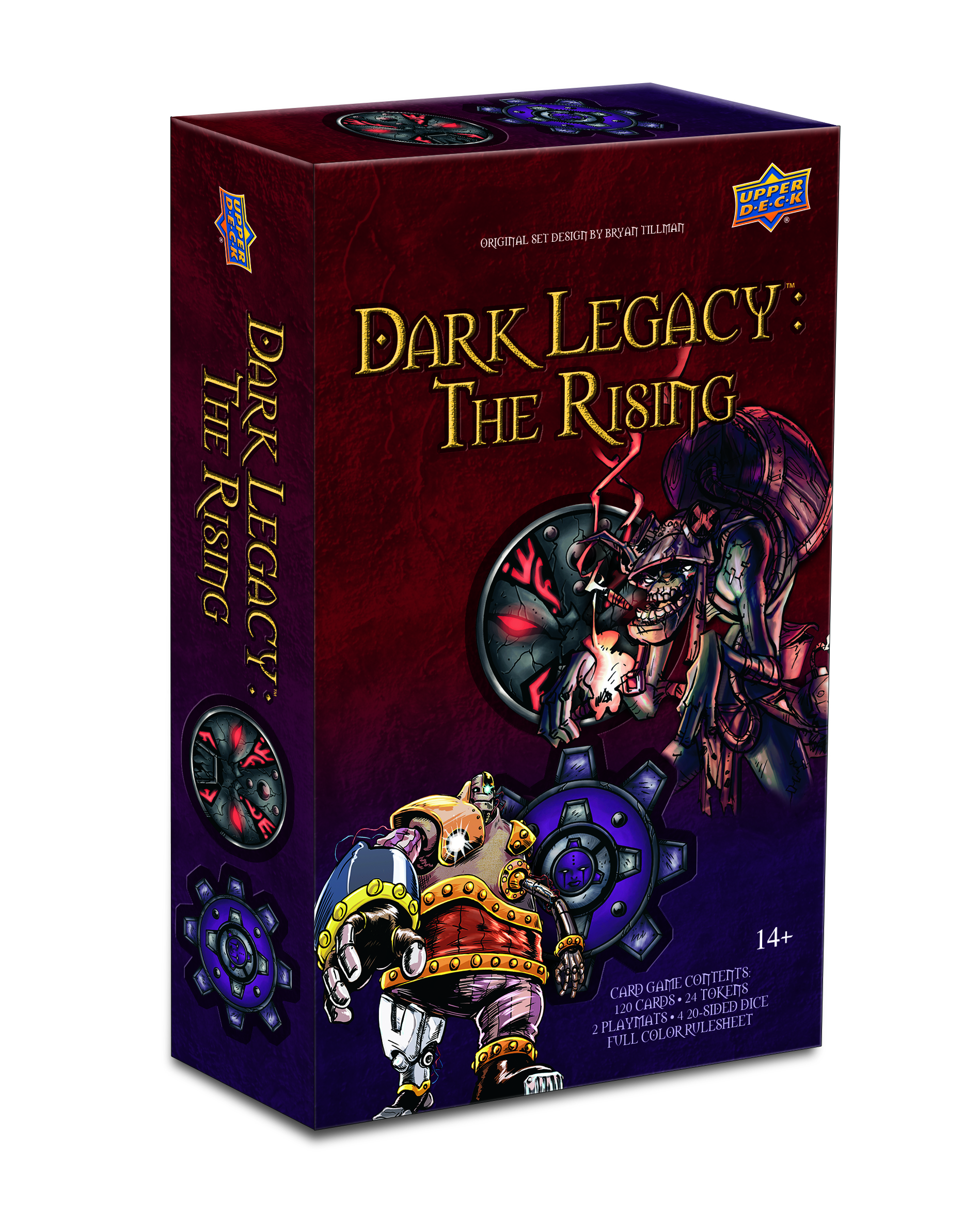 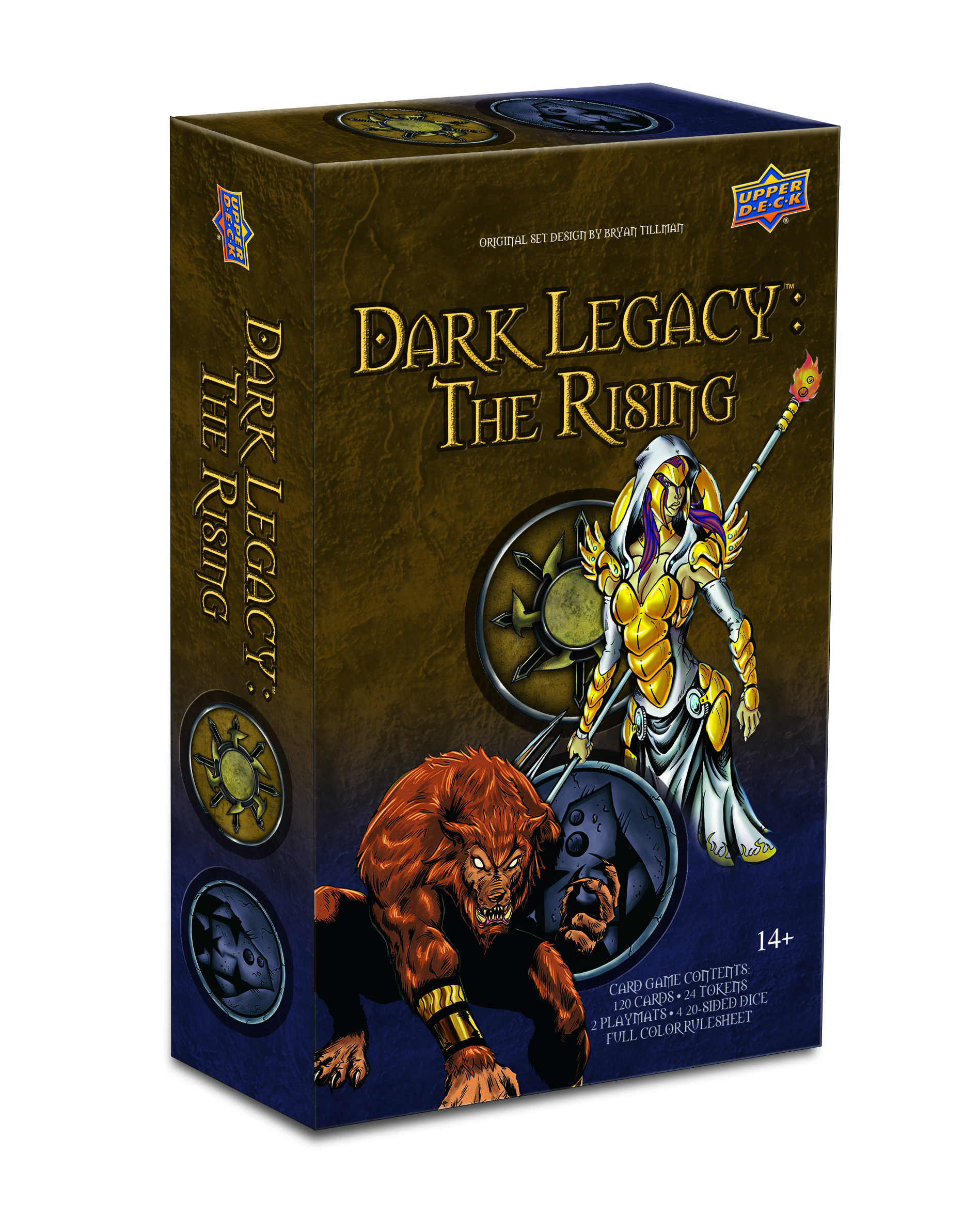 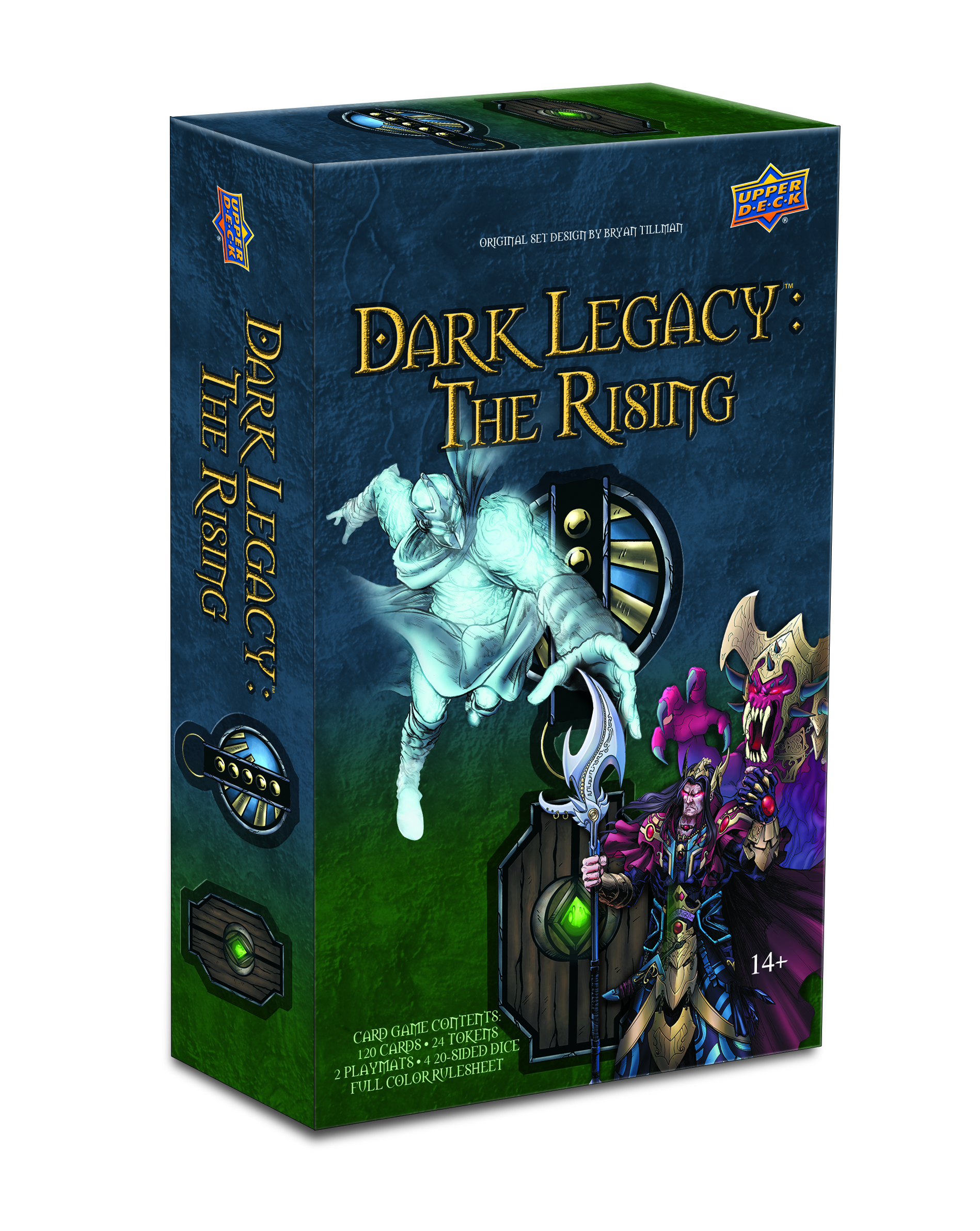 Dark Legacy: The Rising is available on the Upper Deck Store and your local retailer.