Vs. System 2PCG: Marvel Crossover – Spider-Man 2099 and the Sinister Syndicate

Good news everyone! The previews for the 2018 Crossover Issue for Vs.® System  2PCG® have started! This Issue features new cards for 11 teams previously featured in the game.

Today we are going to look at some last-minute reinforcements for the teams in the new (and current) Big Apple Battle Featured Format. (Please see this link for more information on Featured Formats.)

As you may know, Big Apple Battle allows characters from the following New York-area teams; Spider-Friends, Sinister Syndicate, Champions, Inhumans, Defenders, and Underworld. The Underworld team has already had an expansion with Deadpool & Friends, and the Defenders had New Defenders earlier this month. So that left us with four Big Apple teams to give some love to in the Crossover.

First up, let’s take a swing at everyone’s favorite web-slingers, the Spider-Friends. They have one of the six main characters in the Issue: Spider-Man 2099. 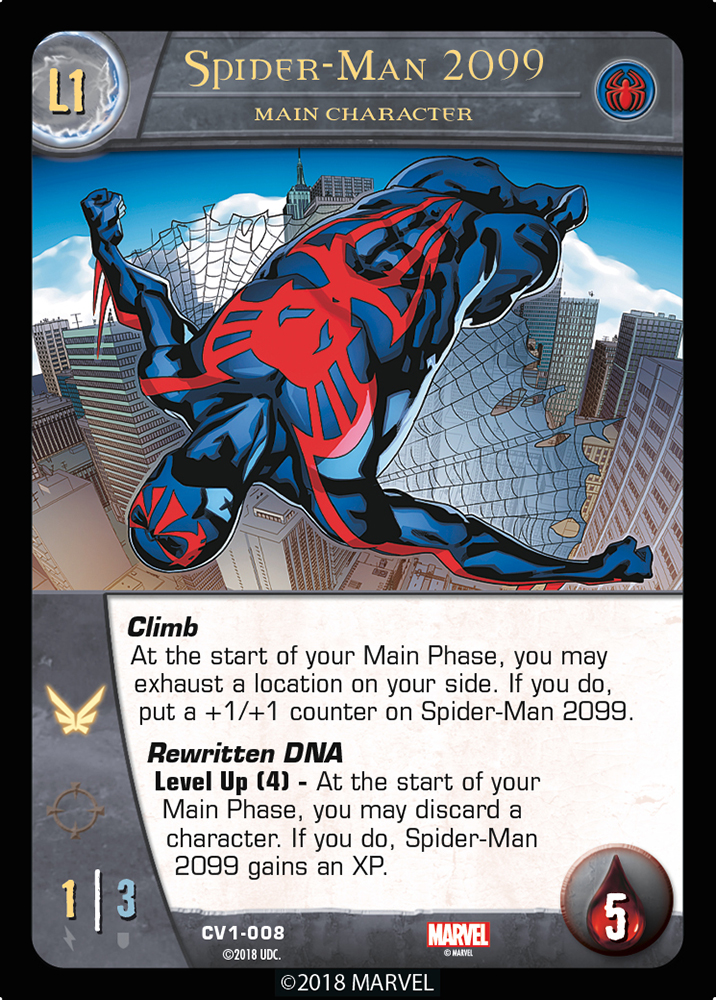 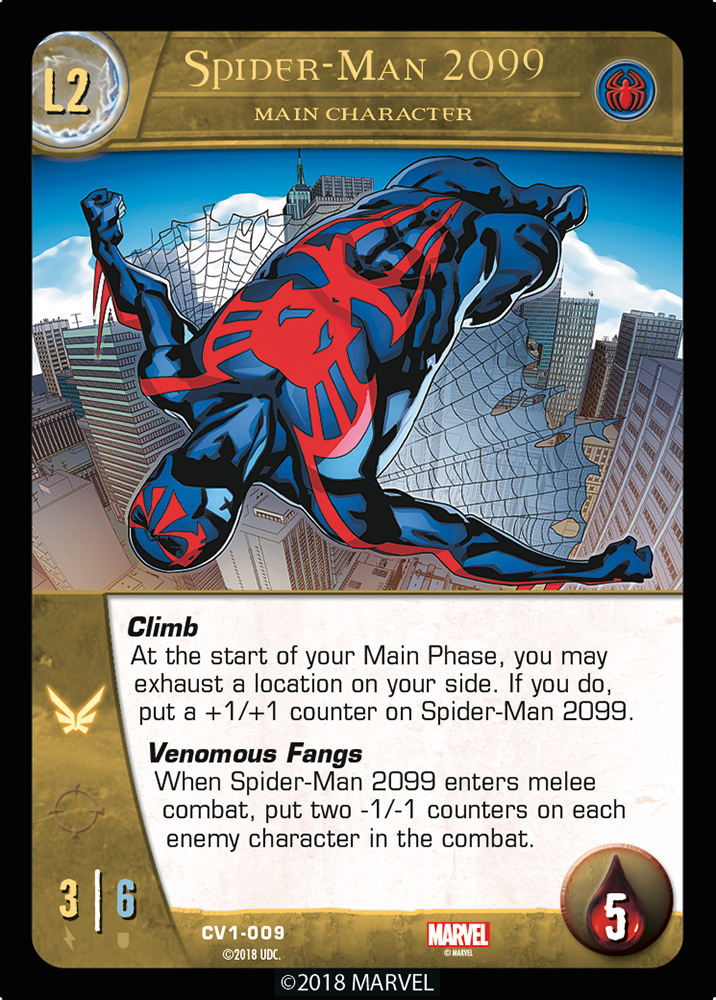 Miguel O’Hara is a geneticist in the future (2099 to be exact), who tried to recreate Peter Parker’s abilities and then accidentally has his own DNA rewritten with a spider’s. Oh, and he has fangs.

Miguel isn’t the only new Big Apple main character, of course. And the Sinister Syndicate doesn’t do anything alone. 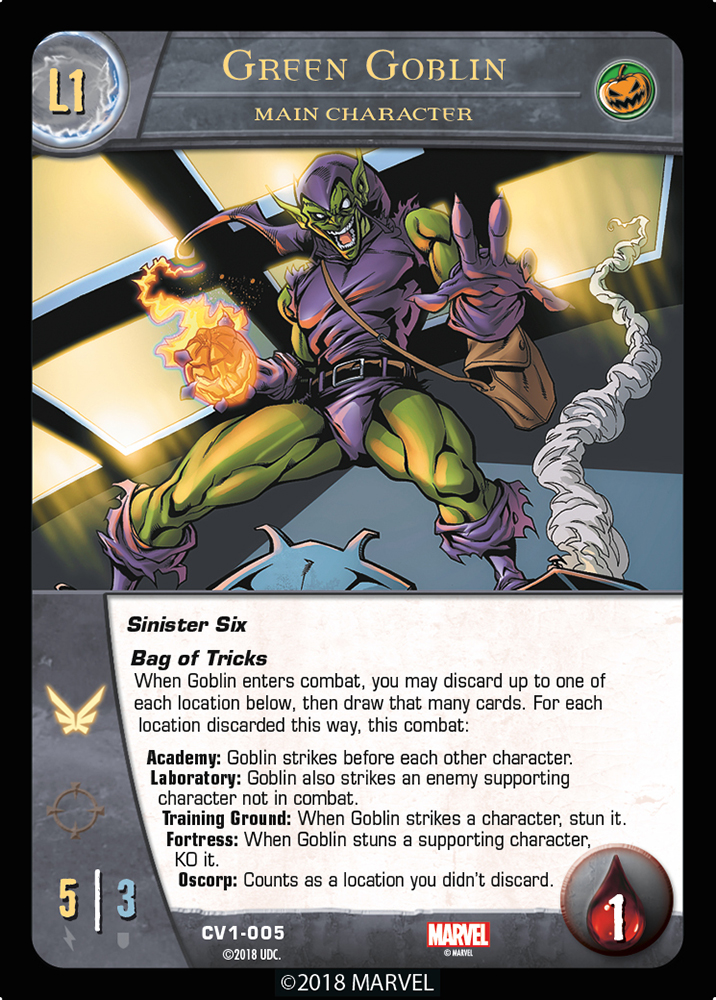 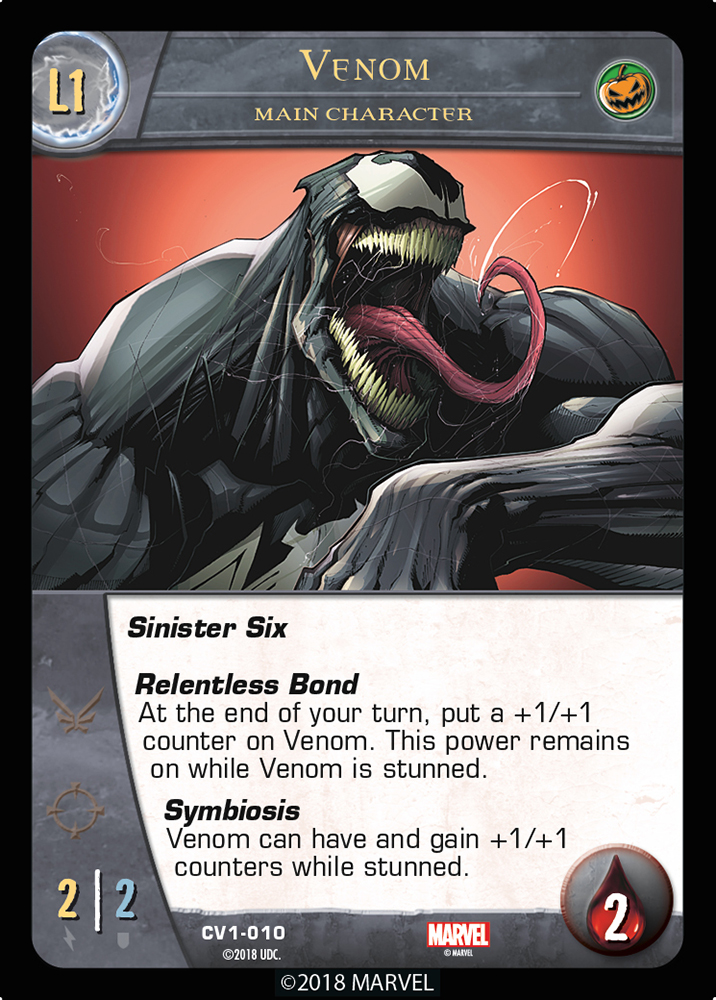 Although not members of the original Sinister Six squad, these two villains are a couple of Peter’s most sinister foes. Now when you choose Sinister Six as your main characters, you’ll have to choose six of the eight to go with your deck. (You must choose your six before the game has started, and if you are playing in a tournament, the six must be the same every game.)

Note that when you use an Academy in Gobby’s Bag of Tricks, he will even strike before characters with, say, Ferocious. So, he will strike before every other character in the combat except another Green Goblin who has discarded an Academy! And when you discard an Oscorp, you may use it as a wild for any other location you didn’t discard! Stormin’ Norman indeed!

There is another Sinister Syndicate character that the others wouldn’t let into the Main Character ranks. He’s a little headstrong. But he makes a great supporting member… 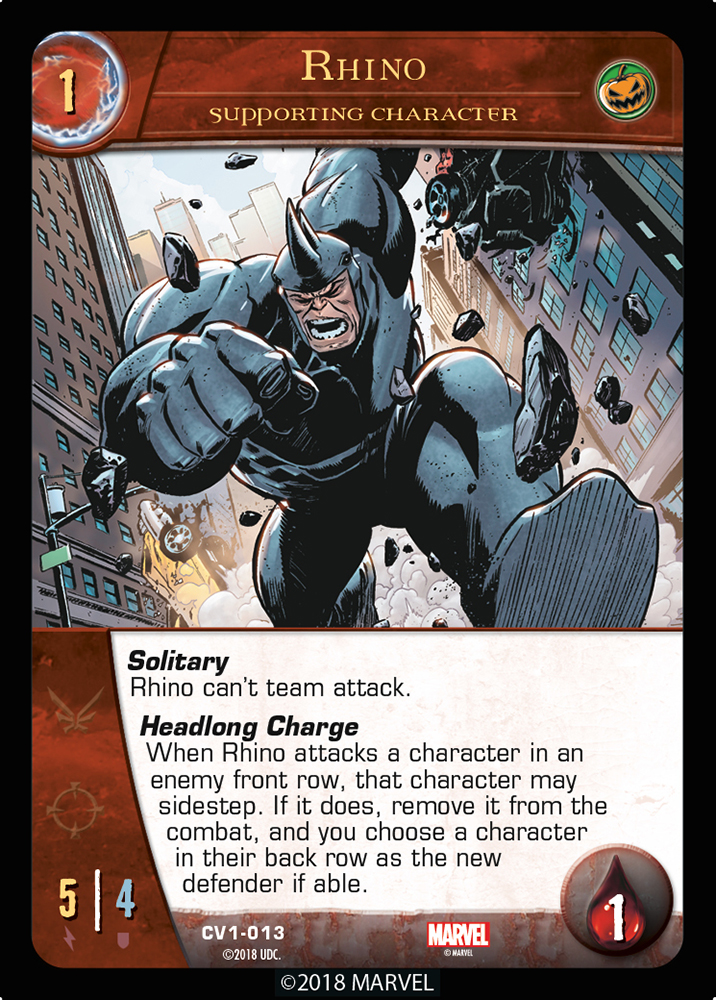 Momentum is both Rhino’s blessing and his curse. Defenders in the front row can sidestep him; this means that the defender stays where it is, but avoids Rhino just enough. The defender doesn’t count as moving.

When an enemy front row character sidesteps, you’ll get to pick a new defender in their back row. But if there aren’t any, the combat will end. Sorry Rhino!

Moving on to the Champions, they’ve found the ultimate team player! 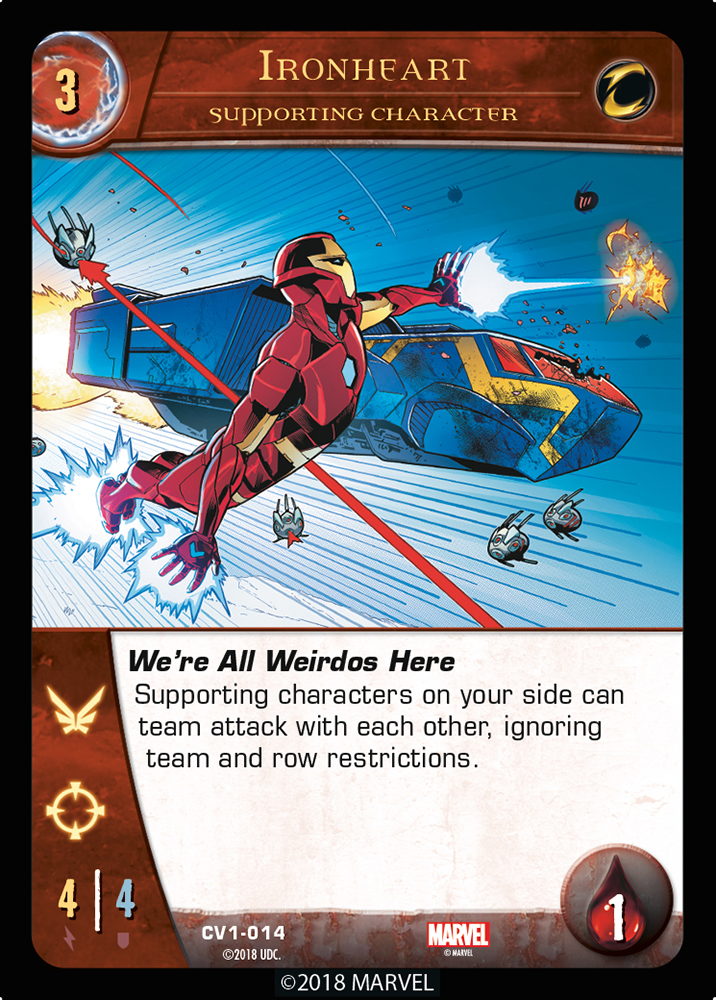 Riri Williams is a young genius inventor who creates her own version of the Iron Man suit. When she joins the Champions, she is hesitant about doing ‘the team thing’. But Viv Vision encourages her to give it a try, in a uniquely Viv Vision way — because the new Champions team is sort of a mish-mash of characters from all different teams and places. Riri translates Viv’s advice — “We’re all weirdos here and that’s okay.”

Her power represents people from different perspectives coming together, and it lets your characters team attack even if they don’t share a team affiliation and even if they’re in different rows. If there’s at least one melee attacker and at least one ranged attacker in the same attack, then the attack itself is both a melee and a ranged attack (I know, right?). Note that to make use of this power, each character must still legally be able to attack the defender on its own.

Speaking of coming together, next up we have one of the best in the Marvel Universe at tearing things apart. 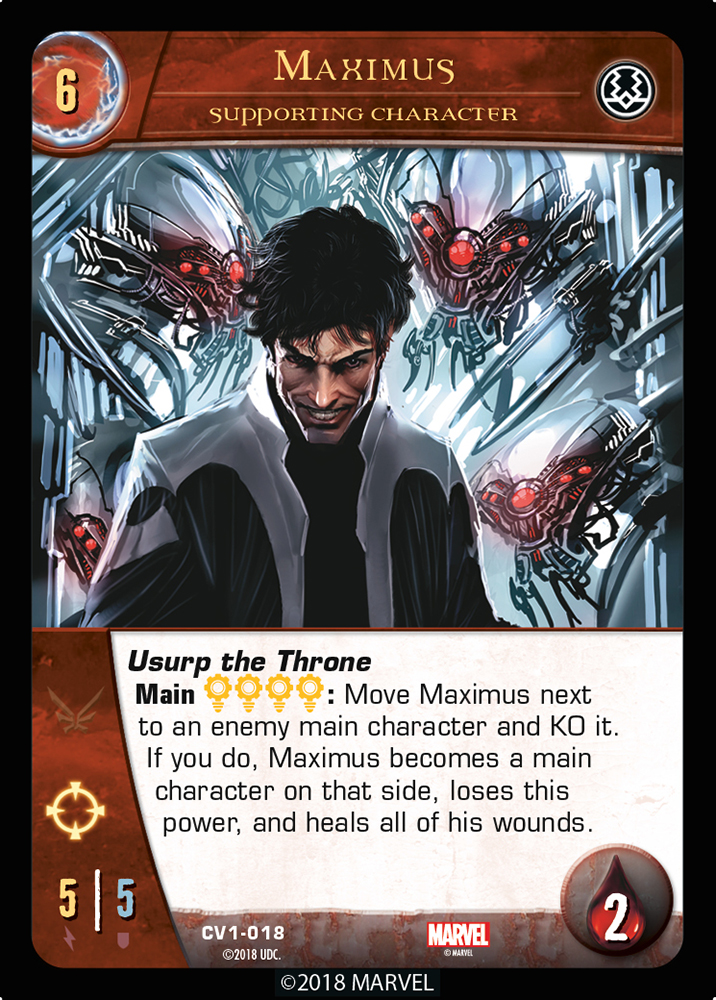 Whoa, what a jerk. Note that if a player doesn’t currently have a main character, Usurp the Throne won’t do anything (we suggest not using it in that case). As the old saying goes, “You can’t usurp what isn’t there, because if it’s not there, how could you usurp it? That’s silly.” 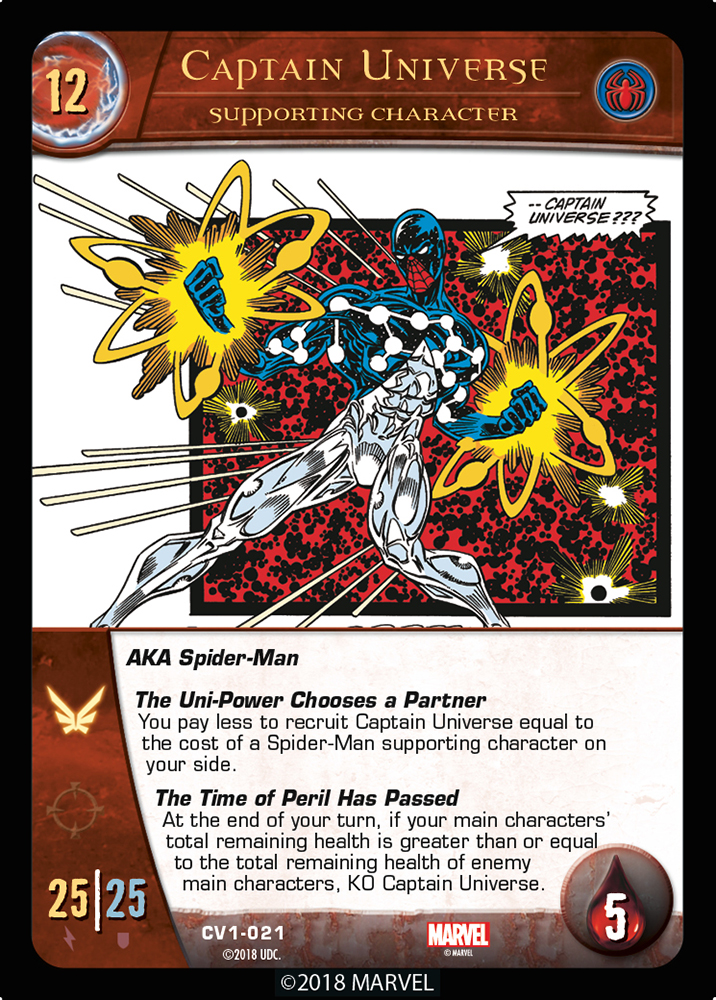 So, if you have the 7-cost Spider-Friends Spider-Man on your side, the Captain will only cost 5! A real bargain!

We hope you liked your first look at the Crossover 2018 Issue! If you did, just wait until the next previews — you ain’t seen nothin’ yet!