Vs System 2PCG: The Buffy Battles Preview – Forces of Darkness

Vampires aren’t the only kind of monster Buffy and her friends must face.

For example, here’s the Mayor. 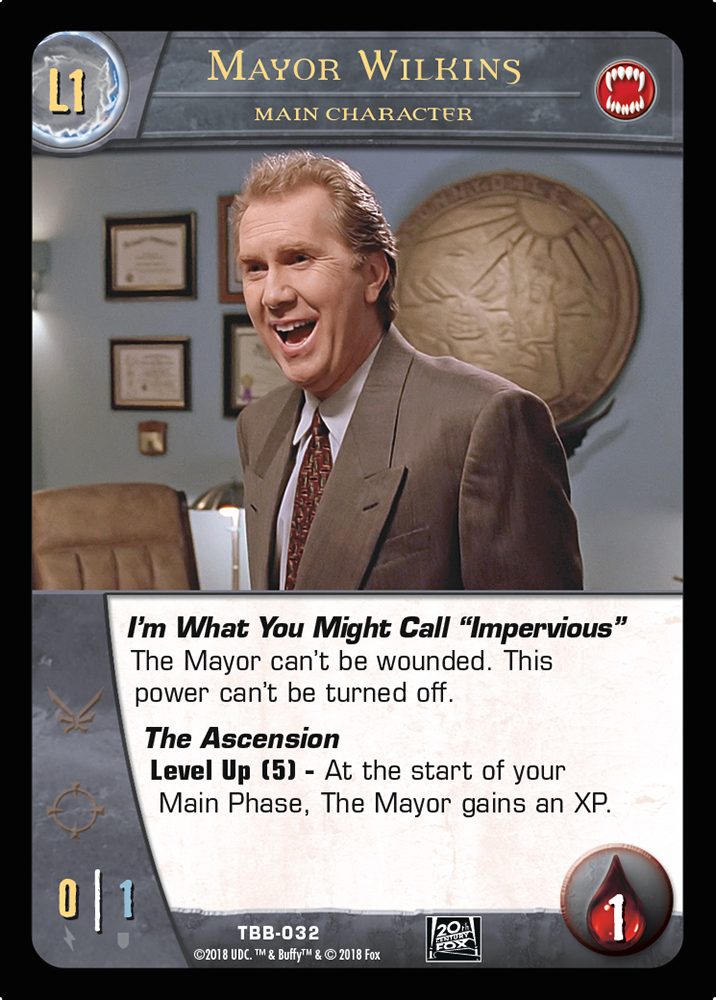 Sure he’s performed a ritual making him completely immune from harm for 100 days. But at least he’s not hurting anyone, right? 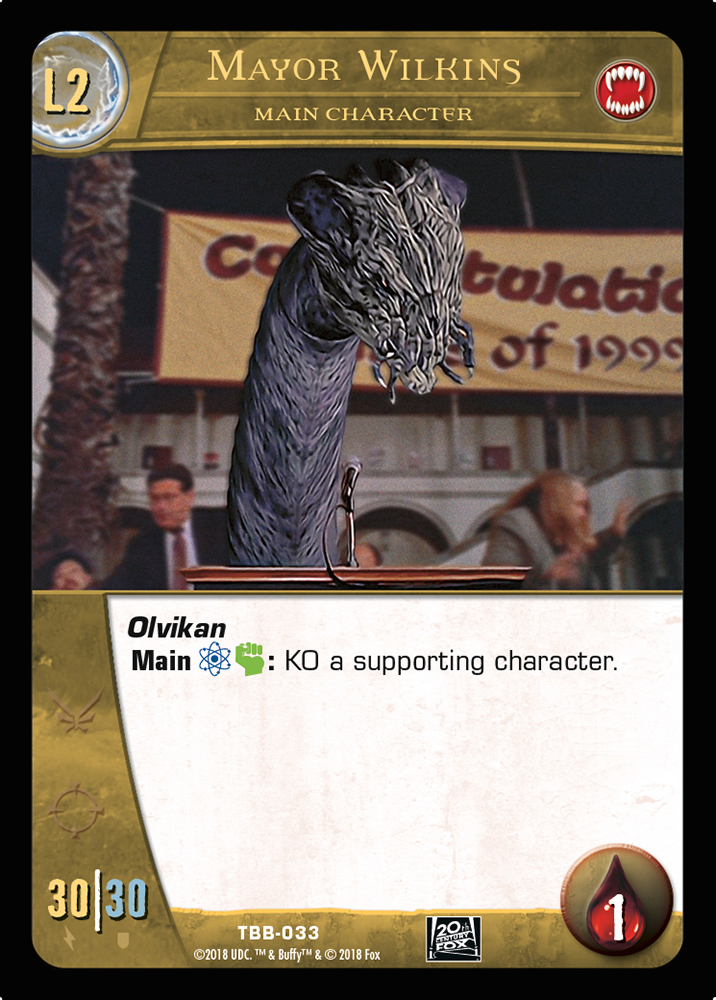 Okay, so he wants to transform into a giant demon and then eat the student body of Buffy’s high school. But hey – he only has one health.

Next up are a group of fairy tale monsters who will (literally) steal your hearts. 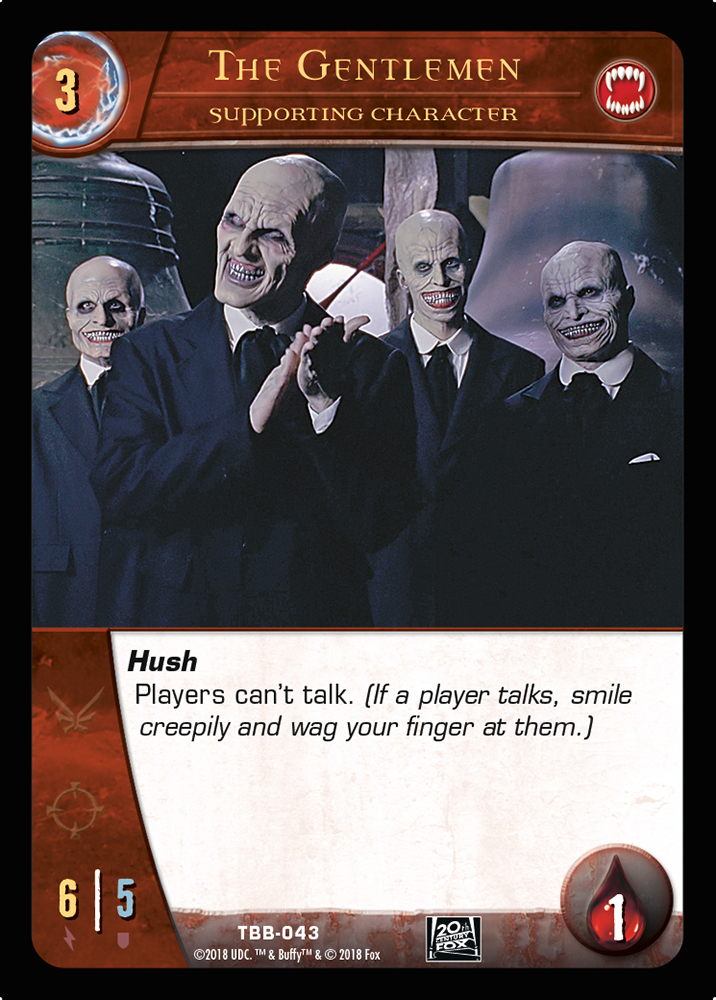 Hush prevents players from using effects that require you to “say” or “name” something. (Sorry Chimichangas!)

It also prevents players from talking in general. You can still communicate in other ways such as using hand signals or writing things down (just like on the show). You can also make sounds without using your vocal chords. If a player does speak, do your best impersonation of a Gentleman in order to shush them. (There’s no in-game penalty for speaking while the Gentlemen are in play. It’s just not cool.)

Now here’s a hell dimension god that will drive you crazy. 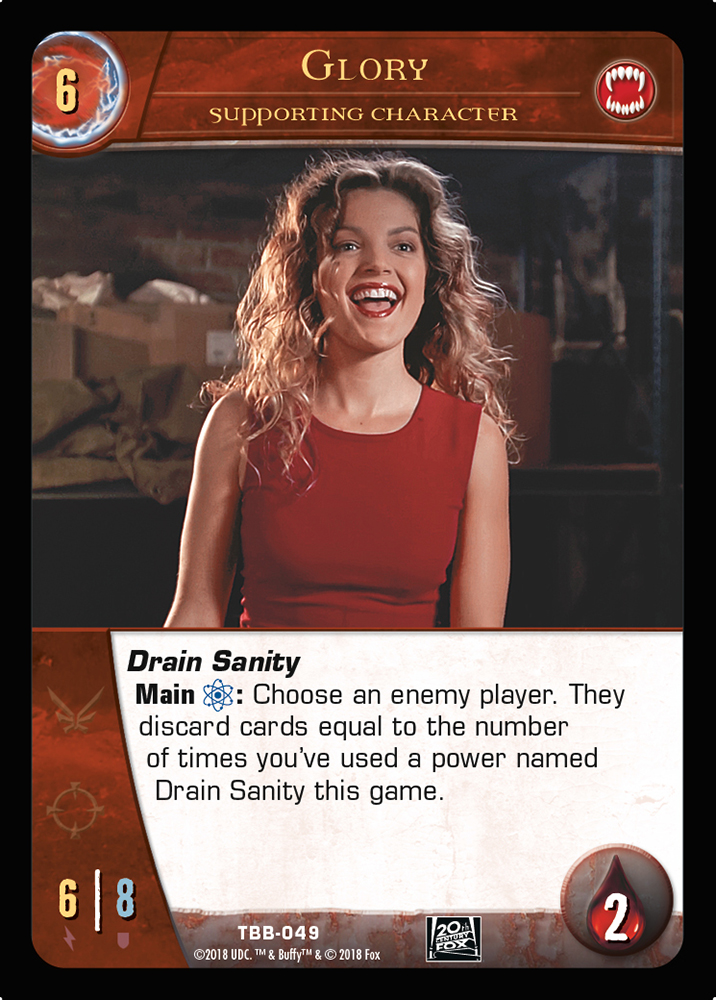 Drain Sanity gets more powerful each time you use it, even if you use it on two (or more) different copies of Glory.

Sometimes threats come from unexpected places. Such as a slayer-turned-evil: 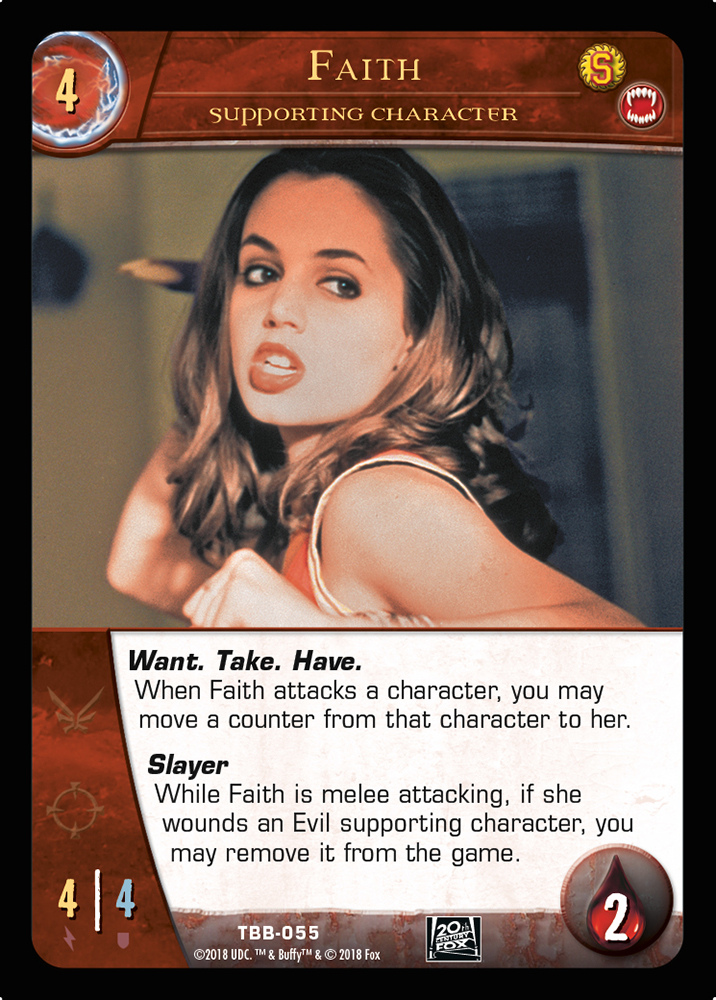 Faith has both the

which means she counts as being on both teams and she is both Good and Evil.

Her Want. Take. Have. Power lets her steal any type of counter including +1/+1 and Vitality counters. (You can also steal -1/-1 counters and wounds, but we don’t recommend it.)

Speaking of good guys that turn bad, last week we showed you the love of Buffy’s life: 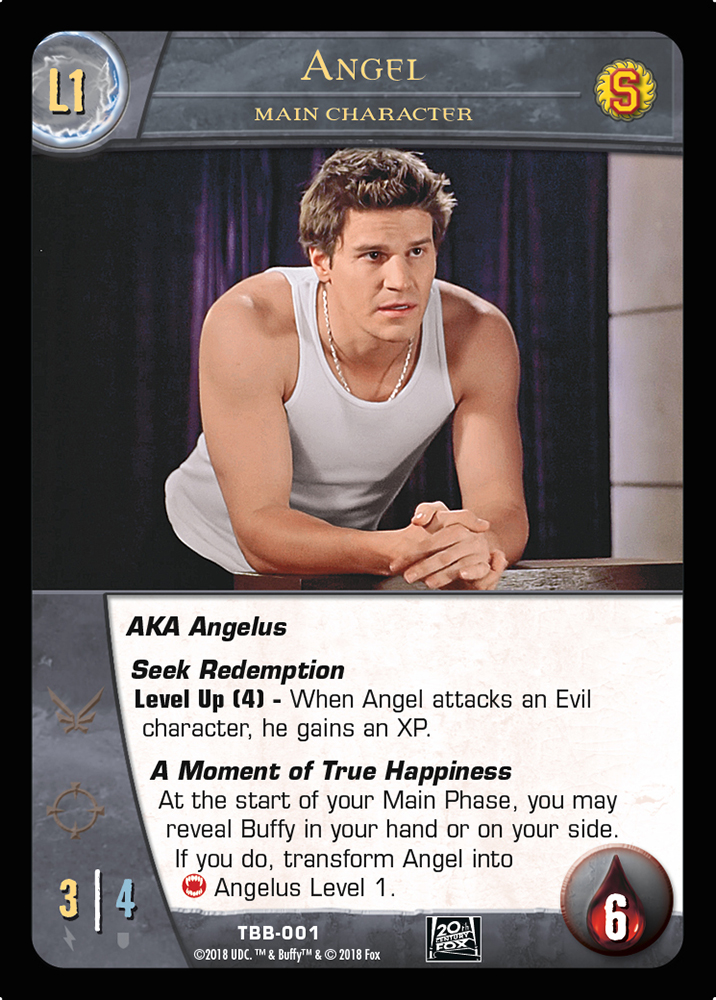 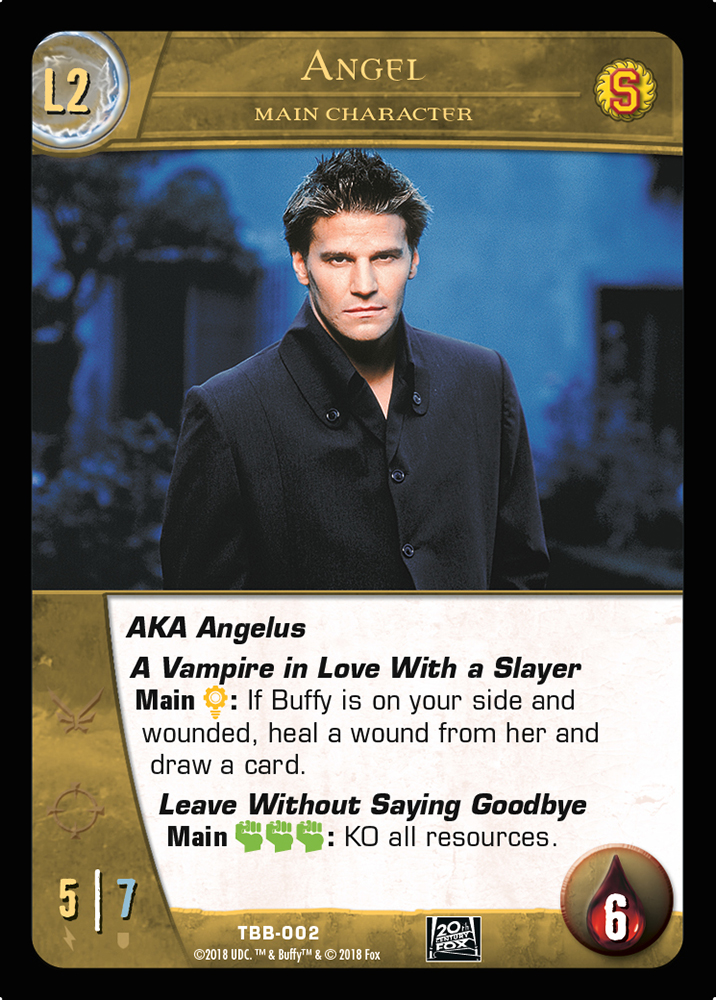 Today, we’ll show you what happens when Angel loses his soul during a moment of true happiness: 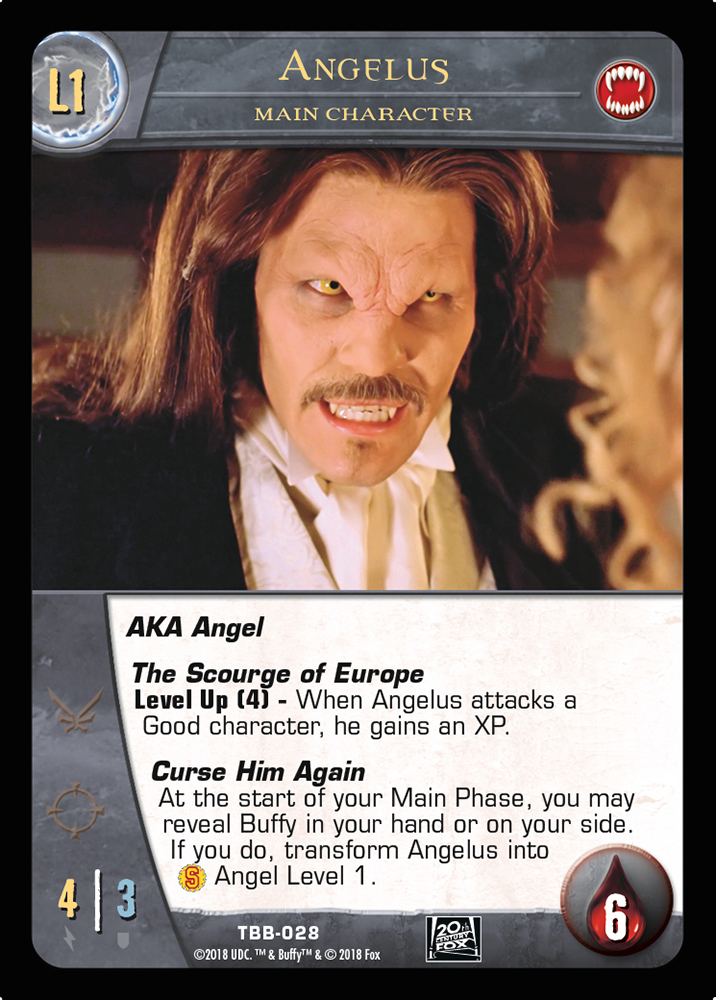 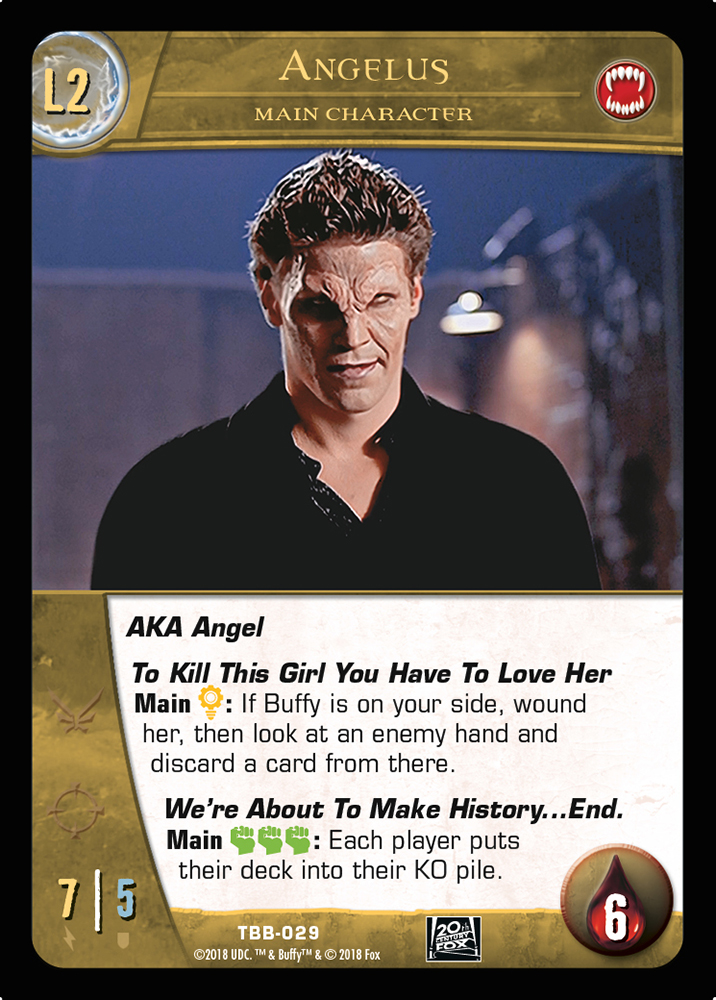 Level 1 Angel and Angelus can transform between each other. However, when you build a deck you must choose either Angel or Angelus to be your starting Main Character. (You must lock in your decision at the time you build your deck, not after you see what Main Character your opponent is using.)

When Angel transforms into Angelus or vice versa, he keeps his orientation (ready/exhausted, face up/ face down), all of his counters (including XP), and any effects on him.

We hope you enjoyed today’s preview. Come back next week for a closer look at Buffy’s faithful friends.