Vs System 2PCG: The Buffy Battles Card Preview – The Vampires

Welcome to the first look at the Vs System 2PCG: The Buffy Battles!

) and the Evil Forces of Darkness (

In the iconic TV show Buffy and her brave band of friends solved mysteries and saved the world time and again. But before we take a look at the heroic Scoobies, let’s take a look at the most common type of monster they faced: the vampire. 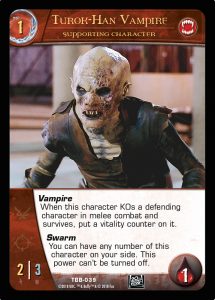 Vampire is a new keyword power found throughout the set which allows a character to gain vitality by KOing enemies. But what exactly is a vitality counter?

A vitality counter is essentially the opposite of a wound counter. It gives a character +1

If able to feed often enough a Vampire will have an unnaturally long life. But some Vampires can tap into their vitality in other ways. 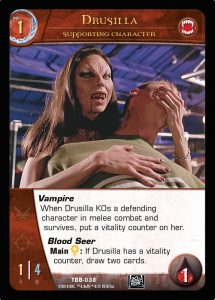 Keep in mind for a character to “survive” a combat that means it doesn’t get stunned. Which isn’t so easy to do, especially for low DEF characters. Fortunately, Vampires don’t always play fair. 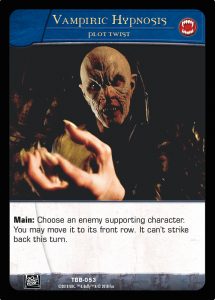 On the other hand some enemies aren’t so easy to KO. Well unless you’re Buffy’s boyfriend-turned-killer: 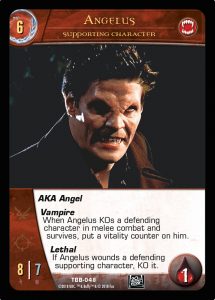 Finally let’s take a look at the King of Vampires himself. 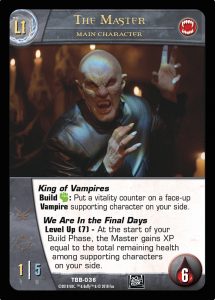 And remember, when you’re an immortal being, time is always on your side… 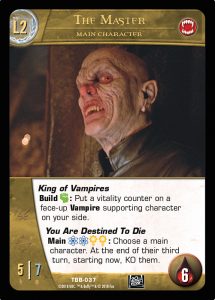 We hope you enjoyed today’s preview. Come back next time for a look at the woman who will stand alone (and with friends) against these bad guys.