Welcome to our third and final preview for the Vs. System® 2PCG®: Spider-Friends Issue.

The Spider-Man comics aren’t always about a teenager from Queens, some are about other Spider-Folk, from other times and space, like Miguel O’Hara. 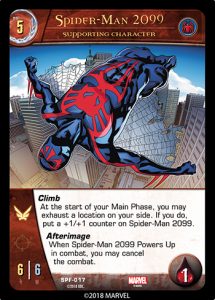 But the heart of the Spider-Man stories is Peter Parker, who just so happens to be a Super Hero. And a lot of the people in his life played an important role in his becoming that hero. Like the most important two, Uncle Ben… 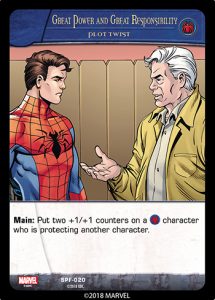 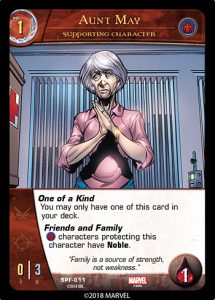 (Noble characters strike with double their ATK while defending.)

And where would he be without MJ? 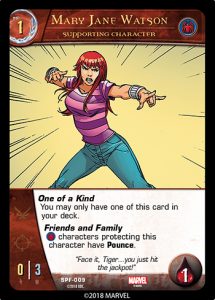 (Exhausted defenders can’t strike back against characters with Pounce.)

But not everyone in Peter’s life is his or Spidey’s biggest fan. Some of his relationships are…complicated. 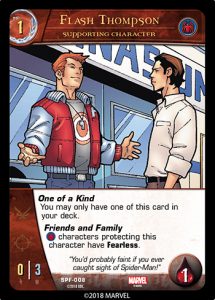 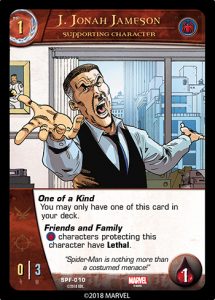 (Fearless characters strike main characters with double their ATK, and if Lethal characters wound a defending supporting character, they KO it.)

All these characters help to support and shape Peter’s heroism, pushing him to become the amazing, wall-crawling, web-slinging, friendly neighborhood Spider-Man! 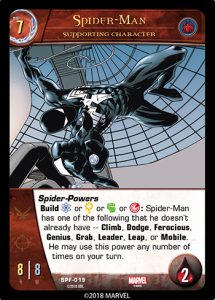 Note that because he is so sensational, these keywords have no end duration (he’ll have them until he leaves play). Spectacular!

We hope you’ve enjoyed this look at the Spider-Friends the last few weeks.

Join us in a few weeks when something sinister this way comes!