Athletes have been having a lot of fun with autograph inscriptions lately and clearly they add something special to the cards. We had an interesting case when we received some redemptions back from a confirmed signing that had a special addition to the signature added, “8x All-Star.” The cards were from Sergey Tolchinsky who was in our rookie patch autograph set from the 2016-17 NHL The Cup product. There’s just one problem, as a rookie that season, there’s no way he could have been a NHL All-Star eight times. Was he just having fun with us?

We reached out to his team and they confirmed the autograph and inscription are indeed authentic. Given language issues Sergey was confused if he had to sign inscriptions on these. Since there were eight cards, he thought that equated to “8x” and there was All-Star copy on the outside of the package (we show examples of cards on the outside, this one said “All-Star”) so he put those two together and there you have it; “8x All-Star.” 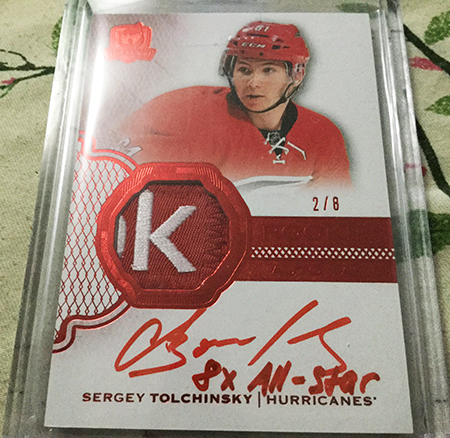 Time will tell if he actually can crack the All-Star roster eight times, but it will certainly be fun to watch. In the meantime, those holding on to these cards have a unique item to say the least!