With a 2nd and 3rd period goal to seal a 3-1 home win, sophomore star Jake Guenztel records his 10th NHL postseason goal becoming only the 2nd NHL player ever to reach this mark in their first 2 playoff appearances. 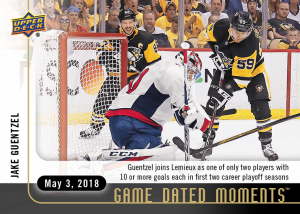 Card #84 (May 5, 2018) – Kyle Connor Racks Up his 1st and 2nd Career Playoff Goals on His Way to the First 3-Point Playoff Game by a Rookie in Franchise History

The Jets’ rookie, Kyle Connor, finds a way to sneak the puck past Vezina Trophy finalist, Pekka Rinne, twice in less than 5 minutes serving as his first and second career playoff goals while adding a 3rd period assist to make him the 1st ever rookie in franchise history with a 3+ point game. 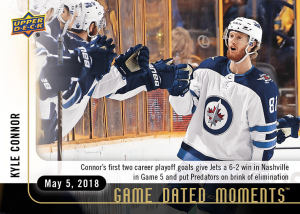 The Golden Knights continue to baffle the hometown odds makers by making short work of the San Jose Sharks on their way to the Conference Finals as they become 1 of 3 teams to win multiple playoff series in an inaugural season. 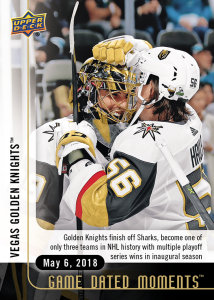