The Capitals take a loss at home against the rival Penguins, but Ovechkin gives the fans something to cheer about with his third period goal standing as his 100th NHL playoff point, making him the first player in franchise history to reach that mark. 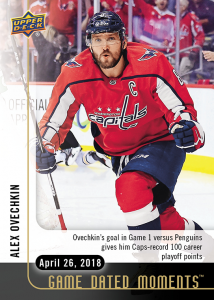 Card #82 (April 27, 2018) – Hellebuyck Extends his Playoff Shutout Streak to 163 Minutes While Setting a Franchise Record for Saves with 47

Connor Hellebuyck does his best impression of a brick wall in Nashville while he turns away a franchise playoff record 47 shots as he extends his playoff shutout streak to an even 163 minutes before an early third period Predator’s goal, the only goal for the Preds in a 4-1 Jets’ road playoff win. 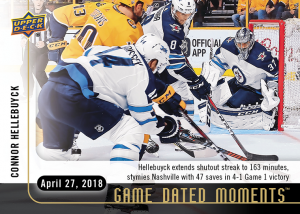