Card #77 (April 17, 2018) –   The Golden Knights Continue their Historic Season Becoming the First Team to Sweep their First Playoff Series in their Inaugural Season

The Golden Knights pay no mind to the odds as they take a broom to the division rival Kings becoming the first team in their inaugural season to sweep their first ever playoff series. 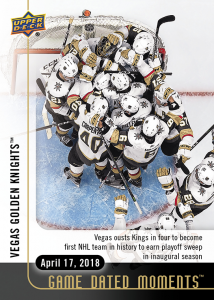 With an assist and a goal in game 4 of the 1st round playoffs versus the rival Flyers, the Pittsburgh captain surpasses Penguins legend, and Hall of Famer, Mario Lemieux for most post-season points in franchise history.

After seven years in Winnipeg, the Jets treat the home crowd to a 5-0 rout of the visiting Wild to take the first round playoff series as they advance to the next round for the first time in franchise history. 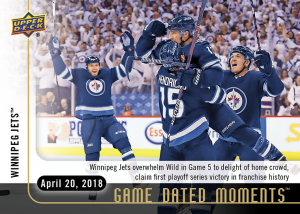 Card #80 (April 22, 2018) – Guentzel Adds to His Impressive Young Playoff Resume After Scoring 4 Consecutive Goals as only the Second Player to do so

Rising up to the occasion, second year player Jake Guentzel makes short work of the Flyers defense and easily scores 4 consecutive playoff goals without interruption from either team, a feat that has not been repeated in 33 years. 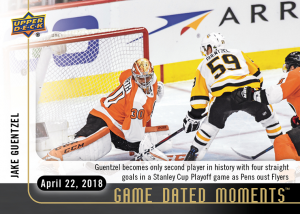