Card #73 (April 11, 2018) – The Pittsburgh Captain Joins Lemiuex and Stevens as Only Pens’ Players with a Natural Hat Trick in the Playoffs

The Penguins’ Captain opens the first round of playoffs in action as he scores the final 3 goals of a 7-0 shutout of the visiting Flyers to take a 1-0 series lead joining franchise legends Mario Lemieux and Kevin Stevens as the only three Pens’ players to achieve such a feat.

After winning the faceoff in Lightning territory, Hischier takes advantage of a puck that the Tampa defense failed to clear and puts it in the back of the net becoming the youngest player in franchise history to score a playoff goal. 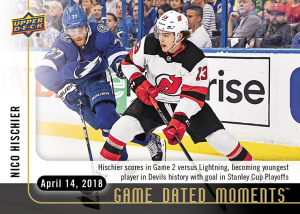 David Pastrnak puts his name in the same company as “The Great One” as he passes Gretzky to be the youngest player to ever have a 6-point playoff performance while tallying 3 goals and 3 assists in a 7-3 takedown of the visiting Maple Leafs. 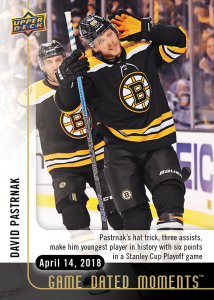 With a spin move off the failed clearing attempt by the Jets defense, NHL® fresh face, Jordan Greenway snaps the puck to the back of the net recording his first ever NHL® goal in the second period of a 6-2 home playoff win as he becomes the first Wild player to record their first goal in the playoffs. 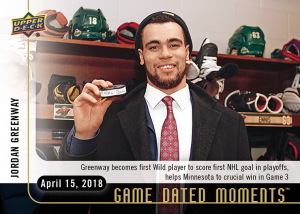