Price laces his skates and gears up for his 557th NHL® game in a Canadiens jersey, surpassing Hall of Famer Jacques Plante for the record. 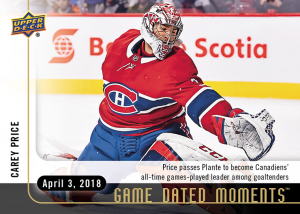 Though the final score was not in the Red Wings‘ favor, the Detroit captain adds 3 assists to his career point total and takes sole possession of 5th place over Hall of Famer and Red Wings’ legend Sergei Fedorov for most points in franchise history. 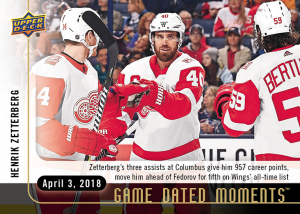 Card #71 (April 5, 2018) – The Sedin Twins Show Out One Last Time in Front of the Vancouver Home Crowd with a Storybook Ending OT Winner

In an improbable Hollywood style ending in Vancouver, Henrik Sedin shuffles the puck from the corner back to his brother Daniel who aims and zips the puck past the Coyotes’ goalie to score their final OT goal in front of the uproarious applause of the home crowd as the Sedin twins further cement themselves in Canucks’ franchise history. 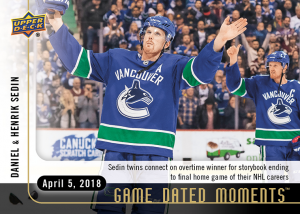 At home versus a surging Bruins team, Luongo puts his helmet on for the 1,000th time forever linking his name to the likes of goalie legends Martin Brodeur and Patrick Roy as the only other players to reach that mark. 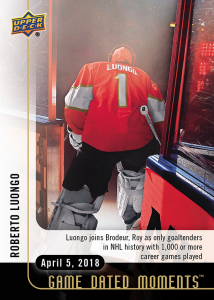