Just 34 seconds into overtime, Brad Marchand capitalizes on a rebound puck and hammers it past the Red Wings’ goalie capping a 5-point hat trick performance while setting a new Bruins’ franchise record for OT goals. 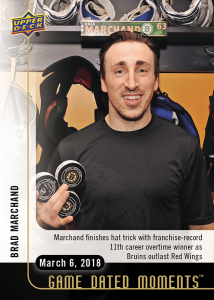 During a hard fought game in the “Battle of Pennsylvania“, the Steel City captain gets his 1,100th career point faster than any other active skater after setting up teammate Conor Sheary for two easy 2nd period goals during a 5-2 victory over the rival Flyers.

Connor Hellebuyck  crushes the previous Jets’ franchise record of 34 wins in a season after blocking 41 of 43 shots helping his team to a road victory over the Devils with 12 games still left in the 2017-18 NHL® season. 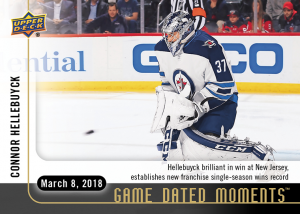