Vs. System 2PCG: Brotherhood of Mutants card preview – Mutants and the Mutants (or Flame Constructs) that Love Them

What would a Vs System® 2PCG® expansion that introduces the Brotherhood of Mutants be without Magneto?

I guess we’ll never know because here he is:

The new Magneto main character riffs on his original Super Villain character from Vs. System® 2PCG®: The Marvel Battles except this time around instead of keeping himself safe, he wants to protect his team. Specifically his team of Brotherhood buddies. 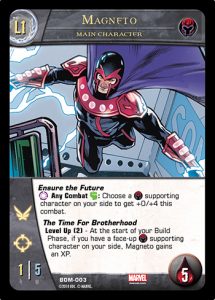 But at Level 2 Magneto has realized that in order to advance his goals for mutantkind he’s going to need help from other mutants. Specifically the X-Men. 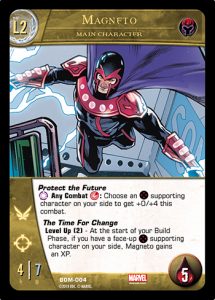 And by Level 3 Magneto has realized his vision. Not only are all mutants unified, but they’ve gone from merely trying to stay alive to becoming a powerful force aggressively fighting for their own future. 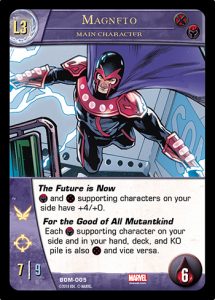 And what would a king be without his Toady? 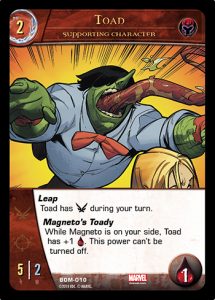 Keep in mind that Toad will get the +1 Health bonus regardless of what Magneto is on your side. This includes the original Magneto main character and the Magneto supporting characters from either The Marvel Battles or Shield Vs Hydra expansions.

And finally, what would a mutant with the ability to shape and control fire be without his fire creature? 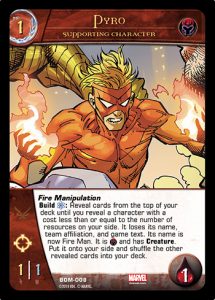 team symbol, and the Creature keyword (which means it can’t use equipment — because it would melt obviously!) When it’s KO’d or otherwise leaves play, the card will go back to counting as the character printed on it.

We hope you enjoyed today’s Preview Article. Until next Wednesday, Make Mine Mutant!

Vs. System® 2PCG®: Brotherhood of Mutants hits stores this March.

Episode 132: Monument to a Madman – Build a better turn


When is the release date? 18th march?