Entertainment: In space no one can hear you crack packs…

In space no one can hear you scream. In e-Pack you will scream with delight as you open exclusive content, combine cards, and unlock achievements that can’t be found anywhere else. 2017 Alien is coming to Upper Deck e-Pack with all the great juicy inserts and autographs you found in the hobby boxes, which you can learn about here. The entry to e-Pack brings with it tons of extras, including combining base set cards for individual Red retro parallel. Red parallels can be combined for a corresponding Green retro parallel, each found only in e-Pack. When you redeem all 29 of the Semiotic Patches, you’ll be rewarded with the Semiotic Master Patch. 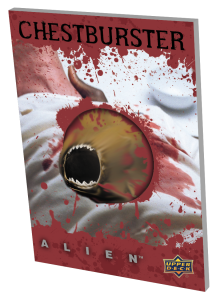 Each of the original insert sets return, and 10 of the same card can be combined to create a new Silver foil version of the card! Hunt for these new foil versions of Behind the Scenes, Paranoid Android, and many others!

The Derelict Ship insert set will be an exclusive achievement series unlocked by redeeming other complete sets. Each card is obtained by redeeming a particular set of cards, such as the 5 cards of the Deleted Scenes insert set. But there’s something else hidden in the Derelict Ship set. The first ten users who redeem the final achievement will get one of the massive 20” Alien King Maquette from Sideshow Collectibles. These beautiful statues are numbered to 1500 and measures 21” long with incredible attention to detail with seven detailed alien warriors at the base. Users who earn this achievement will be given a placeholder card that can be traded and redeemed, once redeemed the statue will be shipped to you! 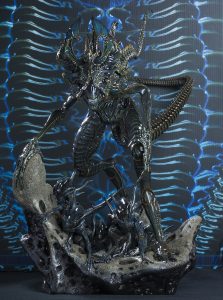 This amazing photo was taken by our very own John Ibriks!

You can find packs and boxes of 2017 Alien on Upper Deck e-Pack now! Interested in e-Pack? You can learn more about how it works and how to sign up here, and get a free pack every day!