Today’s preview article is brought to you by the number 4.

Welcome to the first preview article for the upcoming Deadpool and Friends (and Enemies) expansion to the Vs. System® 2PCG®.

Let’s get the party started with the Man himself. 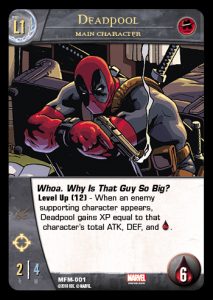 For starters, this is a new Deadpool main character. Unlike his previous version which was an X-Men

, this version represents his eviler side so this time around he’s a member of the Underworld team

Note: The two different Deadpool versions (X-Men and Underworld) CAN’T level up into each other. The official rule is that a character can only level up into a version of itself that’s in the same expansion OR has the same artwork. (The latter case is pretty rare and only applies to things like the Legacy expansion where characters gain a new higher level version in a future set.)

Deadpool’s Level 1 doesn’t have a super power – he’s too busy complaining about the stats on his opponents’ characters. 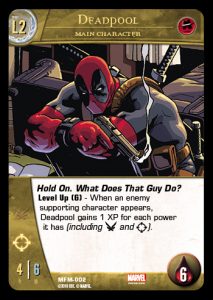 Deadpool Level 2 still doesn’t have a super power – he’s too busy trying to remember what powers his opponents’ characters have. 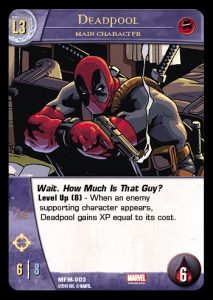 Finally Deadpool’s Level 3 also doesn’t have a super power – he’s too busy complaining about the cost of his opponents’ characters.

We hope you enjoyed today’s preview –

Hi there, fellow Vs. System® 2PCG® aficionados! It’s your old pal, Deadpool, and I’m taking over the rest of this preview article. Hold your applause till the end please. We’ve still got a lot of ground to cover.

And speaking of me taking over things, check this out: 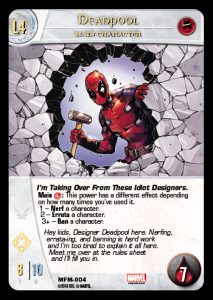 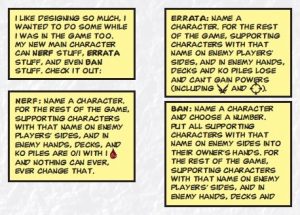 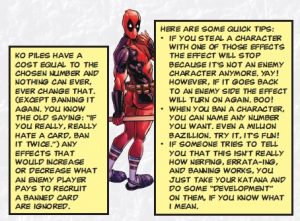 So yeah, I’m the first Main Character that goes all the way to Level 4. I’m pretty sure there’s a 4th Wall reference in there somewhere. While I look for it, check this out: 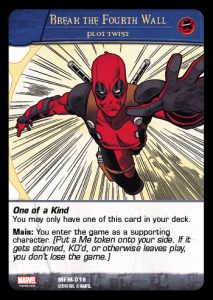 Oh, there it is. I’m sure you longtime players remember my old Main Character card let me attack players that weren’t in play. Well this time we’re flipping things around, flapjack style. This time you get to enter play and fight alongside me. We’re like two peas in a hyper-violent pod!

I’ll bet you’re wondering what me looks like. I mean, what you look like. I mean… you know what I mean! 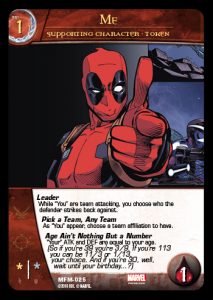 You probably have questions about how this all works, so let’s get to ‘em.

How do you prove your age?

If you’re at a tournament you’ll need an ID with a birthday. If you don’t have one, we’ll just pretend you’re 11.

Does this card have different power levels for different players depending on their age?

Great question. Think about it this way: Yes.

What happens if I’m 29 and tomorrow’s my birthday, but then it turns to midnight in the middle of the game?

Isn’t that kind of stupid?

That’s not a question.

Man, all this Q+A has got me kinda hungry. 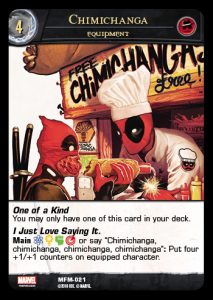 Delicious! And for all you game-the-system types out there, no you can’t combine the costs of this card. You might want to pay an

and just say “Chimichanga” twice. But that’s not how it works, you tricky little munchkin! You gotta pay all four symbols or say Chimichanga four times. As the evil octopus lady said, life’s full of tough choices.

All right, I’m outta here. I’d say I hope you liked today’s preview, but let’s be honest with each other: You did.

We hope you’ve enjoyed today’s card preview. Tune in next week as we get a visit from some of Deadpool friends, and enemies. Also keep an eye on our Facebook and Twitter pages for more previews of this upcoming set.

Vs.® System® 2PCG: Deadpool and Friends (and Enemies) will bust down the doors of stores this February.