We continue the Vs. System® 2PCG®: Deadpool & Friends card previews with even more evil!

Let’s start off today’s preview with a character that will leave you in stitches. (Get it? Because he’s all stitched together? No? I’ll explain later.) 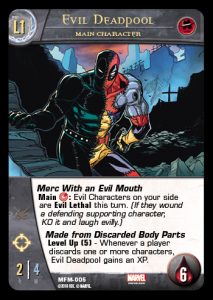 It’s everyone’s favorite character that was made from Deadpool’s discarded body parts that fused back together into a new person!

Evil Deadpool introduces a new keyword power to the game: Evil Lethal. It works a lot like regular Lethal except when you KO a defender you have to laugh evilly. (Don’t worry — if you’re unable to laugh evilly, you will still resolve the effect as much as possible and KO the defender.)

Evil Deadpool’s level up triggers whenever any player (including you) discards characters, which also includes when someone powers up a character.

I know what you’re thinking. Evil Deadpool’s level 1 is pretty evil. But is his level 2 even eviler? 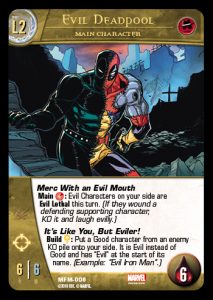 Evil Deadpool’s evil Level 2 power It’s Like You, But Eviler! lets you evilly steal a good character from an enemy KO pile and evilly turn it evil by adding the word “Evil” to its name. Evil.

Adding “Evil” to the character’s name does affect the uniqueness rules. For example, if you stole Iron Man he would become Evil Iron Man, and then you could have Evil Iron Man and Iron Man on your side at the same time. Keep in mind if you tried to steal (regular) Deadpool his name would become Evil Deadpool which is the same name as your Main Character which is a big no no, so the effect wouldn’t work.

Now let’s take a look at a character who is not a huge fan of the Marvel Universe. 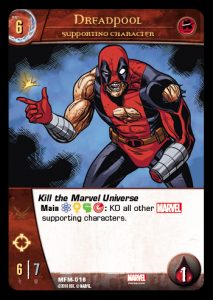 In the comics this alternate universe Dreadpool killed everyone. But here in the Vs System we like to keep things a bit more friendly — he just KOs them.

Finally check out a one of a kind character that’s really four characters. 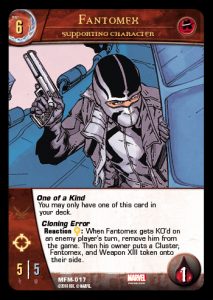 When Fantomex was killed and then inevitably cloned back to life, his three brains caused three separate clones to be created. (Did you see how casually I mentioned his three brains. Yay comics!) 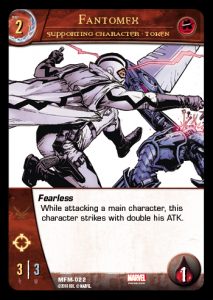 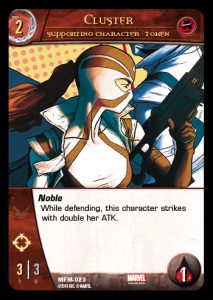 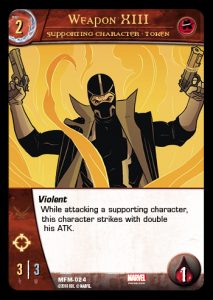 We hope you enjoyed today’s preview. But either way Vs. System® 2PCG®: Deadpool & Friends (and Enemies) goes on sale this February.

If you missed our other Vs. System® 2PCG®: Deadpool & Friends card preview you can find it HERE.