Today’s preview introduces the Brotherhood of Mutants to the Vs. System® 2PCG®. It’s a new team, new characters, and new ways to beat down the good guys.

Let’s get things started with everyone’s (except the X-Men) favorite Unstoppable Force. 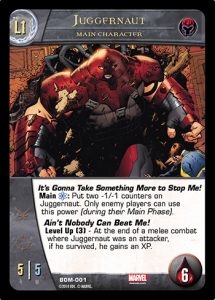 Juggernaut has massive stats for a Level 1 Main Character. Fortunately, his first power actually helps his enemies take him down.

Note: An opponent can’t use a “wild” location like Avengers Mansion to pay the

I know what you’re thinking. Sure he’s big, but he doesn’t have Flight, Leap, or Stealth. What if he really wants to attack a back row enemy? 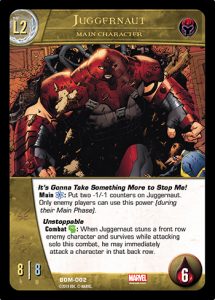 Now let’s take a look at everyone’s (except the X-Men) favorite Immovable Object. 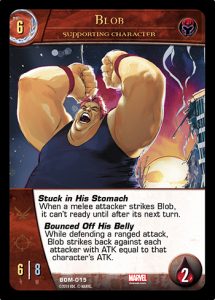 Blob has two different defensive powers, depending on whether he’s facing a melee or ranged attack.

Any melee attacker that strikes Blob will get stuck in his belly fat until after his next turn. (This happens even if the attack KO’s Blob. Just imagine the knocked out Blob lying on top of the attacker.)

And any ranged attacks will bounce off Blob’s belly and smack the attackers. (Blob still gets struck and can be stunned in the attack.)

Note: If somehow Blob has

(perhaps from an equipment), his Bounced Off His Belly power will override the normal

Finally let’s take a look at everyone’s (except the X-Men) favorite hypnotist. 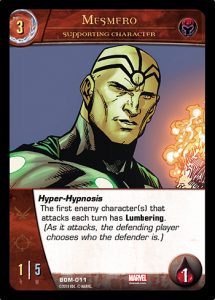 Mesmero brings back the Lumbering keyword power, first introduced in the Vs. System® 2PCG®: Monsters Unleashed expansion. But this time it’s his hypnosis power that forces an attacker to lumber around slowly.

We hope you enjoyed today’s introduction to everyone’s (except the X-Men) favorite team of evil mutants.

Rise up and join the Brotherhood. Vs. System® 2PCG®: Brotherhood of Mutants hits local gaming stores this March.