2017 was one of our greatest years in Entertainment so far. We showcased all of Marvel Studios films, did a fan-favorite set with Clerks, and took a stroll down memory lane with the original Alien movie.

In May Marvel Studio’s released the much-anticipated sequel to the critically acclaimed Marvel’s Guardians of the Galaxy. Guardians of the Galaxy vol 2 is a fun set with lots of unique aspects such as oversized cards (1 per box), guaranteed memorabilia, and either a sketch, auto or other insert (1 per box) featuring all your Guardians characters. But on top of that, you can find Groot’s Roots, birch wood cards burned with your favorite twig.

Guardians of the Galaxy vol 2 contains 8 cards per pack, 10 packs per box.

One of our more unique sets that we released in 2017 was based on Kevin Smith’s Clerks. This 90 card base set has two parallels the gold Quick Stop Foil Parallels and the numbered (to 37) Red Foil Parallels. You can get 1 of 1 original art sketch cards, autographs from Kevin Smith, Jason Mewes, and many others. 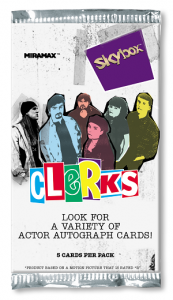 Over the summer we released our 2017 Marvel Premier featuring all original artwork. Premier is one-pack per box, and each box yields two sketch cards (with one standard sized sketch and one multi-panel sketch card in each tin). This 55 card base set are all numbered to 125 with three Parallels each numbered (Blue to 50, Gold to 10, and Black to only 5). Each box also contains 1 premium insert that may include Classic Art Shadowbox cards, Hellfire Club Portraits numbered to 30, or Die-Cut Bronze Busts.

2017 Marvel Premier is sold out but contained 5 packs per card and only a single pack per tin.

2017 brought the first stand-alone Spider-Man film from Marvel Studios after his return to the Marvel Cinematic Universe in Captain America: Civil War. Tom Holland is a fresh blend of Peter Parker’s intellect and adolescence with Spider-Man’s sense of duty and responsibility. Spider-Man: Homecoming has a 100 card base set, autos, sketch cards, insert cards (including a look behind the scenes and Concept Art). Look for all new Booklet Card Autos and 1 of 1 sketch cards featuring hand-drawn artwork.

Our most recent release is 2017 Alien, fashioned after the first of Ridley Scott’s Alien film from 1979. This set is printed on vintage-feeling cardstock with images from the film with a 100 card base set and throwback design. Each pack contains 1 card from one of three different Parallel sets, each numbered (Blue to 99, Red to 25, and Canvas to 15). Find and open Alien Egg Shadowbox Cards, Semiotic Patches, and up to Triple Autographs. The box opens from the center of the top and is designed after the Ovomorph. 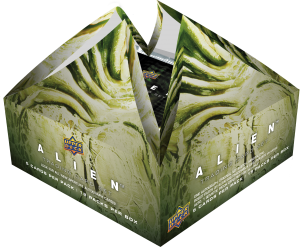 Every year we take a look back at Marvel comics, the new issues, the mini-series, and the stories told in our Annual series. 2016 Marvel Annual featured a look at some of the Rookie Heroes, Plot Twists, Team Logos, and Team Name Patches also with a 100 card base set and 50 short prints. These looked at amazing comics like Ms. Marvel written by G. Willow Wilson, Spider-Women by Dennis Hopeless, Moon Knight by Jeff Lemire and Doctor Strange by Jason Aaron, all written in 2016.