In 2015 Marvel released the first season of Daredevil to join the Marvel Cinematic Universe. Charlie Cox’s Matt Murdock was mind-blowing, and the show was so well received that a second season, and several other shows, were announced to follow-up in a lead to The Defenders much the same way the movies led up to Avengers. 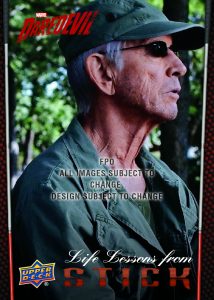 In 2016 the second season aired and it brought an even deeper understanding of The Man Without Fear while also giving us Jon Bernthal’s Frank Castle – who just recently got his own spin-off show.

Now Upper Deck, in partnership with Marvel Studios, is ready to bring Daredevil to life in our upcoming Daredevil trading card set. Each pack contains 5 cards based on events of Marvel’s Daredevil. You’ll also find three numbered parallel sets which are numbered to 299, 99, and the Elektra Parallel set is only numbered to 49. 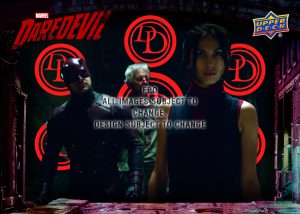 In each pack, you’ll find cards from the 100 card base set that depict specific scenes and stories from both the first and second season of the show. You’ll follow Matt Murdock, blind lawyer, and his friends as he discovers what it means to be a hero in the streets of New York’s Hell’s Kitchen. You’ll see the Kingpin, Elektra, Foggy, and even The Punisher.

One of the premium insert sets will replicate the design of 35mm film reel. These Film Cels will beautifully show stills from a scene in sequential order to completely immerse you in the scene. When you find a Film Cel signed by one of your favorite Daredevil actors, like Charlie Cox, it will be in a beautiful gold or silver ink to show against the acetate. A rare variant of these Film Cel cards exists as well, each which feature a sleek red tint. 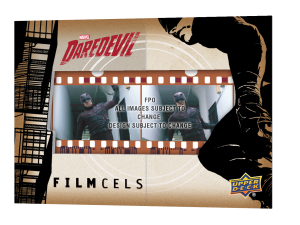 Another insert set you’ll find is Episodic Art. Original art was made for each episode in the series so far and a piece of art that encompasses the series as a whole for 27 different cards. For each Episodic Art card, there’s also a chance to find them signed by Marco Santucci who did the pencil and ink for each piece, with colors by Sebastian Chen. 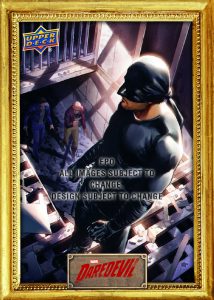 Marvel’s Daredevil from Upper Deck will be available in March 2018 at your local hobby store, and on Upper Deck e-Pack soon after!