Upper Deck is proud to celebrate Black History Month by announcing that Black Panther will be our February Gallery Print. Eisner Award-winning artist Kyle Baker will bring T’Challa, and the Necropolis from Ta-Nehisi Coates’ current Black Panther run to life in this cinematic look at the visitation from the ghost Shuri. 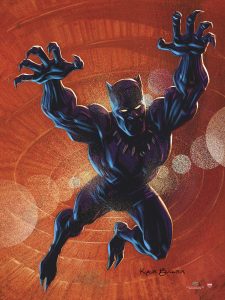 The Black Panther is one of the most skilled Marvel superheroes. T’Challa first appeared in 1966’s Fantastic Four #52. Black Panther is a title and role passed down along a royal bloodline in the fictional African country of Wakanda. T’Challa already wields genius, political prowess, advanced technologies and the engineering skill to use them, as well as incredible martial arts training and peak physical performance. This is enhanced by ancient Wakandan rituals that give the Black Panther increased senses and abilities that border the supernatural.

Wakanda is the most technologically advanced nation on Earth. But on top of that, they are the most spiritual since they have a connection to the Djalia, the Plane of Wakandan Memory, a place that exists outside of time and space and is a blurred line between living and dead. This is a beautiful balance that makes Wakanda such a unique place.

Black Panther will also return to the big screen on February 16th, following Chadwick Boseman’s debut as the character in the 2016 Captain America: Civil War. The titular film also stars Michael B. Jordan as Killmonger, Letitia Wright as Shuri and Lupita Nyong’o as Nakia and Wakanda will make its first appearance after being mentioned as far back as 2015’s Avengers: Age of Ultron. Boseman and Wright will go on to portray their characters in Avengers: Infinity War in May.

You can find Black Panther: King of Wakanda and the rare variant Black Panther: T’Challa’s Pursuit available for pre-order starting February 1st on the Upper Deck Store. Each 18”x24” print will be on cotton 300gsm paper, hand numbered and shipped with a certificate of authenticity.


Will there be a Black Panther movie card set from Upper Deck?