The 2018 Bridgestone NHL Winter Classic® marked the 10th anniversary of one of the league’s most popular annual events and over 41,000 fans entered the chilly confines of Citi Field to watch the hometown New York Rangers ring in the New Year with a thrilling 3-2 overtime victory over the visiting Buffalo Sabres.

Upper Deck was once again on hand at the NHL Winter Classic® meeting with attendees, but savvy collectors know that the company has had a long tradition of making great hockey cards that commemorate the event. On site Upper Deck was making personalized trading cards for excited attendees who have always dreamed of having their own NHL® card. 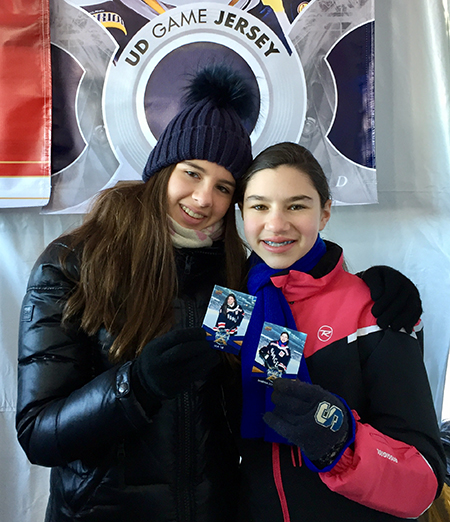 These young fans were thrilled to get their very own Upper Deck NHL card made at the Winter Classic.

For years Upper Deck has created some incredible trading cards featuring not only imagery from the NHL Winter Classic®, but also pieces of game-used memorabilia and even autographs from the players. There are plenty coming in packs of the recently released 2017-18 NHL® SP Game-Used. 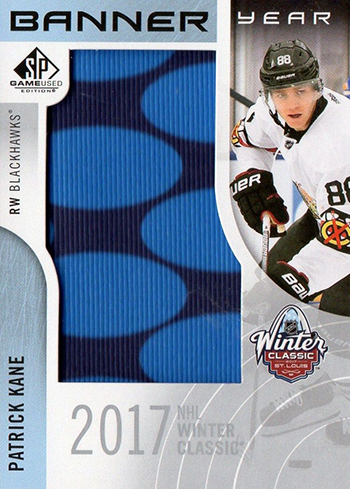 Drawing from the 2017 NHL Winter Classic®, these memorabilia cards will include players from both the St. Louis Blues and Chicago Blackhawks with pieces of pucks, nets, and even event banners. 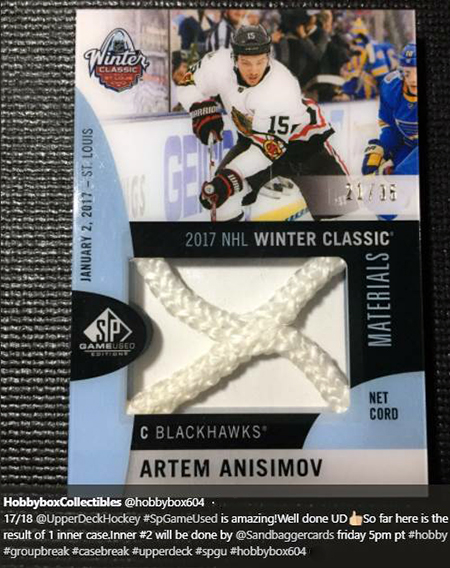 Here are 10 must-have cards from Upper Deck which perfectly capture the spirit of the NHL Winter Classic® and are a fine addition to any hockey card collection: 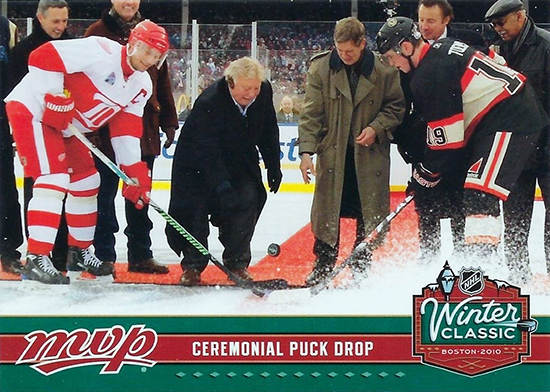 After an impressive debut in 2008, expectations were high for 2009 NHL Winter Classic® in Chicago and fans packed Wrigley Field to see their local heroes take on the Detroit Red Wings. As part of the pre-game ceremonies, legends Bobby Hull and Ted Lindsay dropped the puck alongside some local icons in Billy Williams, Ferguson Jenkins, Ryne Sandberg, Denis Savard, and Stan Mikita. This moment was captured for an insert set in the 2009-10 NHL® Upper Deck MVP release. 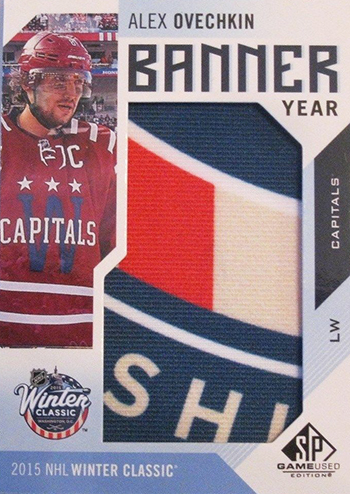 Fans attending NHL® events have seen special banners behind athletes at press conferences after the games, Upper Deck put those attractive pieces to great use as they were cut up and placed into the first Banner Season cards for 2016-17 NHL®SP Game Used. Stars of both the 2015 and 2016 editions of the NHL Winter Classic® were recognized in this collection, but the short printed one featuring Ovechkin truly stands out when you recall his two-point performance against the Chicago Blackhawks on January 1, 2015. A tough-to-find autographed version was also produced that  serious collectors should be on the watch for. Banner Season is back again in 2017-18 NHL® SP Game-Used too, with nine different players in addition to signed editions from Artem Anisimov, Jake Allen, Jaden Schwartz, and Robby Fabbri. 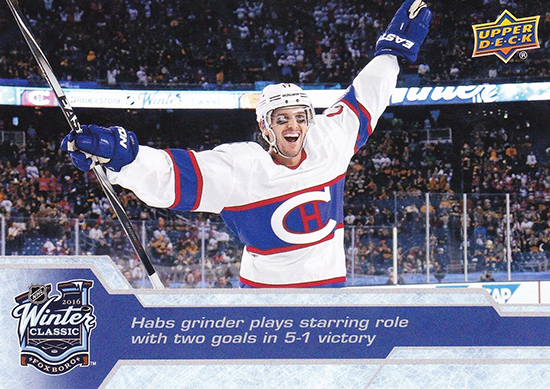 Sometimes, an unlikely hero can emerge during the Winter Classic and at the 2016 edition, Montreal Canadiens grinder Paul Byron fit that role to perfection. During this hotly-anticipated battle between the Habs and the host Boston Bruins at Gilette Stadium, he lit the lamp twice and the first of those proved to be the game-winner. This jumbo card could be found in tins of 2016-17 NHL® Upper Deck Series One, but it has an uncorrected error as fellow Canadiens player Torrey Mitchell is actually shown on the card instead. Apparently it was an imaging error with UD’s photo vendor that wasn’t able to be changed before these packed out, whoops! 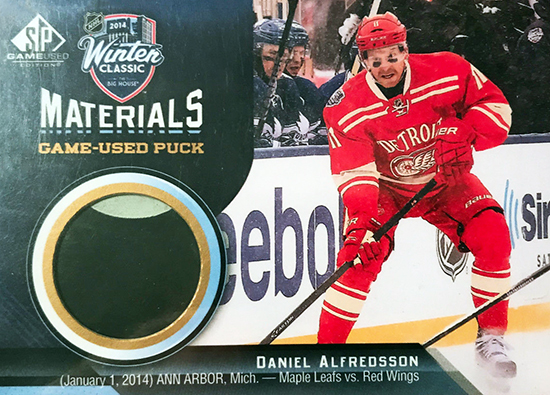 In the twilight of his remarkable NHL® career, Alfredsson signed with the Detroit Red Wings after 17 seasons with the Ottawa Senators and got a chance to participate in the 2014 NHL Winter Classic®. In front of a record crowd of 105,491 at the Big House in Ann Arbor, Michigan, Alfie had fans at the edge of their seats during the first attempt during the shootout, but he was unable to score on Toronto’s Jonathan Bernier. In 2014-15 SP Game Used, Upper Deck chopped up some pucks used in the event for the first time and the three-card collection included Alfredsson, Bernier, and James van Riemsdyk. The pucks are back in 2017-18 NHL® SP Game Used with cards depicting several players from the 2017 NHL Winter Classic®. 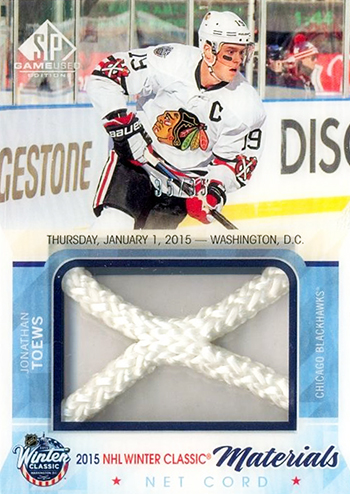 The man dubbed “Captain Serious” is a veteran of outdoor action and is expected to be a part of his fourth NHL Winter Classic® in 2019 as the Chicago Blackhawks host the Boston Bruins at Notre Dame Stadium. This card, which has a piece of the net from the 2015 event where Chicago narrowly lost to the Washington Capitals, saw Jonathan Toews assist on a second period tally by Brandon Saad. Even though Chicago has never won at the NHL Winter Classic®, the demand for Blackhawks memorabilia tied to these games is always strong – especially for this card that is numbered out of 35. If you cannot find this specific card, there will be one of Toews in 2017-18 NHL® SP Game Used as well along with other stars like Corey Crawford, Duncan Keith, and Patrick Kane. 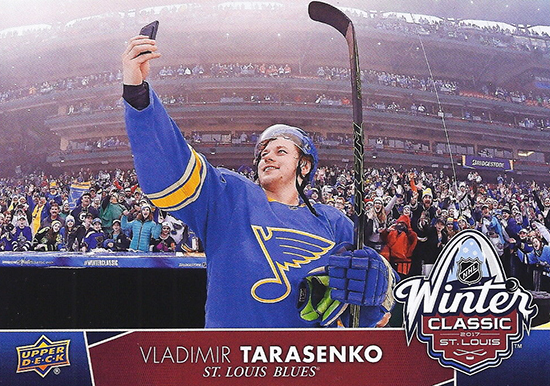 A great photo can make a card a must-have for collectors – especially when it showcases a unique moment like Tarasenko taking a selfie during the 2017 NHL Winter Classic® in St. Louis. Found now in retail tins of 2017-18 NHL® Upper Deck Series One, there are some attractive cards in this over-sized set, and it was only natural that Tarasenko leads it off due to his performance that day. He scored twice, including the winning goal, on the way to being named the game’s first star. 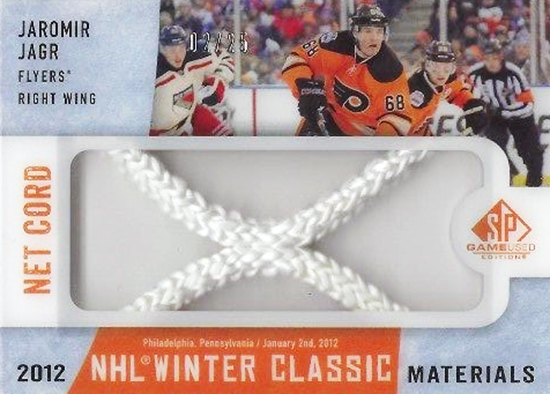 Upper Deck made hockey card history with its 2013-14 NHL® SP Game Used release as it included material that was part of a net used in the 2012 NHL Winter Classic® –  a tradition that continues to this day with each passing event. The first Winter Classic Materials Net Cord cards featured active players and alumni from both the New York Rangers and Philadelphia Flyers teams that participated and were limited to just 25 copies each. Even though there are many great names on the checklist, the coolest of them all arguably belongs to the legendary Jaromir Jagr, featured in his only season with the Flyers. 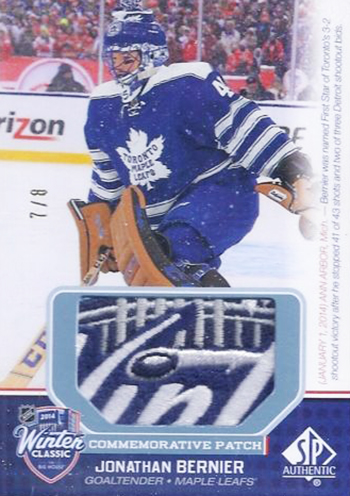 Jonathan Bernier’s time in Toronto was filled with both highs and lows, perhaps his greatest moment in a Maple Leafs uniform came during the 2014 NHL Winter Classic® as he helped the team earn a shootout triumph over the host Detroit Red Wings. The 2014-15 release of NHL® SP Game Used was the first to feature pieces of game-used jerseys worn by four different Maple Leafs that played in the NHL Winter Classic® and parallels included both traditional patch cards and some extremely limited Commemorative Patch cards that are coveted due to their historical significance. 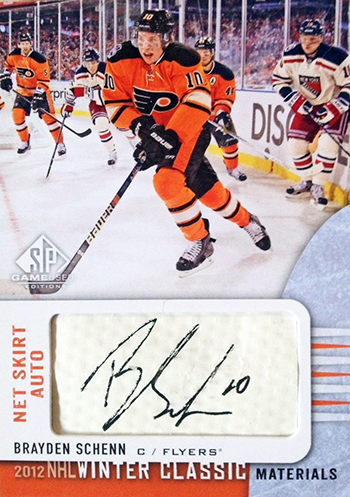 Each season since 2013-14, Upper Deck’s annual SP Game Used release has managed to include some very limited cards featuring memorabilia from the NHL Winter Classic. The scarcest of them all are usually the one-of-one Winter Classics Materials Net Cord Shields (Tarasenko is the player to receive this honor in 2017-18 SP Game Used), but there is one collection that has not been repeated since that season – the Winter Classic Materials Net Skirt Autographs. With unique memorabilia pieces that feature a signature, this set only had three cards as Brayden Schenn was joined by alumni members Eric Lindros and Mark Messier. Certainly, the cards featuring either of those Hall-of-Famers are special, but the one of Schenn, who is presently in the midst of a career year, takes on even more significance as it is directly connected to the game in which he scored his first NHL® goal! 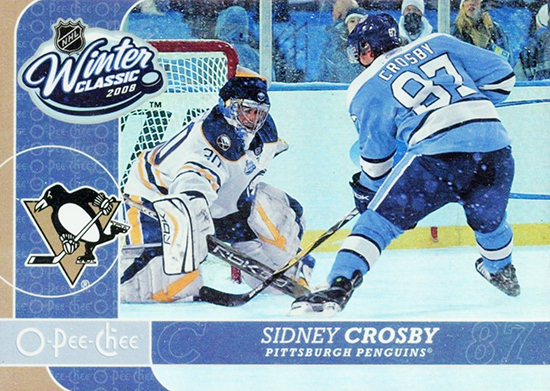 For most fans of the NHL Winter Classic®, there is no greater moment that defines the event in their hearts than the shootout goal scored by Pittsburgh Penguins star Sidney Crosby against then-Buffalo Sabres netminder Ryan Miller to close the inaugural contest back on January 1, 2008. Witnessed by 71,217 die-hards that braved the cold and snow at Ralph Wilson Stadium, it featured a storybook ending that made for a memorable hockey card the next season as 2008-09 NHL® O-Pee-Chee included a 40-card insert set in packs. This card, which perfectly commemorates the iconic moment, was short printed and could be regarded as the cornerstone and starting point of any collection focused on the NHL Winter Classic®.

There are a bevy of amazing NHL Winter Classic™ cards produced by Upper Deck. Think I got any part of this wrong? Share your favorites in the comment section below!