Veteran goalie, Henrik Lundqvist, continues to show why he’s one of the best to ever patrol the crease as he becomes the first ever NHL® goaltender to record 13 consecutive 20 win seasons, as he leads the Rangers to a 5-1 win over the Flyers. 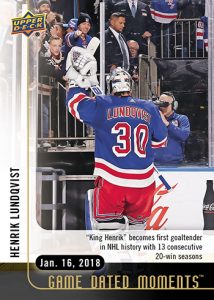 The Anaheim captain continues to etch his name in Ducks franchise history by adding to his franchise lead for assists with his 600th career assist during a 3-point effort in a 6-2 route over the Florida Panthers. 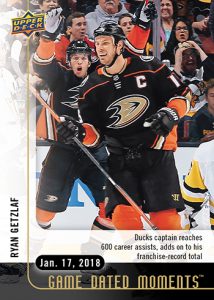 In front of a loud home crowd, Patrick Kane tallies 2 goals and an assist to reach 800 points in his illustrious NHL® career making him only the 5th Blackhawk to do so. 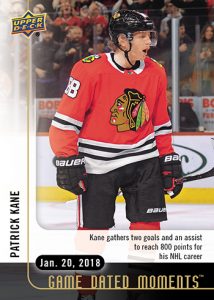 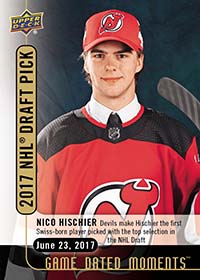 *The 2017-18 Game Dated Moments 2017 NHL Draft Pick Achievement card can be redeemed for immediately; however, the option to ship or transfer this achievement card to a linked COMC account will be enabled in 1-2 weeks.