What was your special order?

Today Upper Deck is happy to show off 2017 Alien Trading Card Set. Alien features a 100 card base set which all contain screenshots from the original 1979 Ridley Scott film. Each of the cards in the base set has a retro design that calls back to the heyday of the film and has a clay coat, similar to cards from that era. 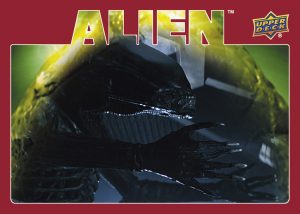 Inside packs of Alien, you’ll also find the behind the scenes insert set called Special Order 937. These cards feature images of the actors, production staff, or in the case of the card below, a set piece. 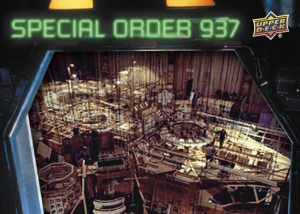 Paranoid Android features everyone’s favorite android Ash. The front of each card will have a screenshot of the film showing Ash doing something “very normal and not at all suspicious”. The backs will then contain another image from the same scene and a “completely meaningless quote” about his Nostromo crewmates. 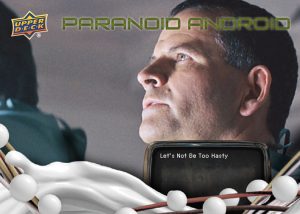 Another fun insert set are the Semiotic Patches based on Ron Cobb’s symbols that are featured all throughout the Nostromo. The one below is the symbol on the ship for an artificial gravity area and lets the crew know they need a specific suit to enter the area. Many others of these are featured in the set, including ‘High Radioactivity’. 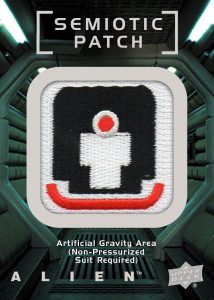 But one of the coolest parts of the movie Alien, and the new Alien Trading Card Set, are the Facehuggers. Not only will you find images of the Facehuggers and other xenomorphs in the Xeneology insert set. 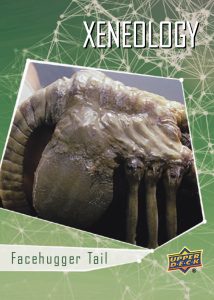 The four-point opening on the box recreates another iconic part of the Alien universe; the xenomorph egg. The flaps all fold up to reveal the packs inside – which may or may not contain a Facehugger that wants to jump out at you. 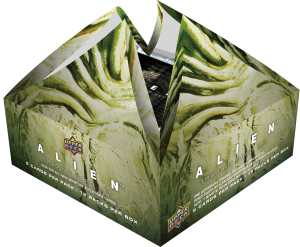 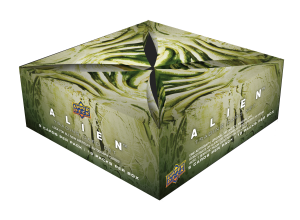 Alien Trading Card set is available in your local hobby store now! Each pack contains 5 cards, and each box contains 18 packs – with 12 boxes per case. You’ll be able to grab Alien on ePack early next year, with the chance to get the exclusive Chestburster Finger Puppet card by collecting all the autograph cards.