Upper Deck Gallery: If you want peace, prepare for war.

Years ago, Frank Castle watched as his family was gunned down in the crossfire of a mob shooting. Now he prowls the streets of New York City as the Punisher, waging a one-man war on crime. 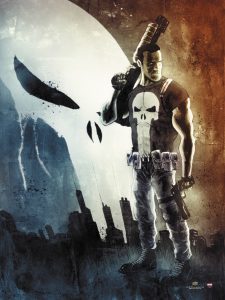 Frank Castle, a decorated US Marine Special Forces veteran, was an upstanding citizen and member of society and a loving family man before they were taken violently from him during a brutal mob hit. He is now an unstoppable one-man army waging war against organized crime, working his way through the system and unleashing his wrath upon the corrupt businessmen who deemed his family collateral damage. Fueled by tragedy and heartbreak, Frank Castle became a vigilante assassin with a powerful drive to punish those who do wrong with the criminal scum of New York’s City streets in his crosshairs. A psychologically troubled antihero, he sees the world in very black and white terms, choosing to solve his problems with firepower and finality. A force of cold, calculated retribution and vengeance, when in doubt his response to any problem is to hit back hard.

Frank Castle died with his family. Now, there is only the Punisher. 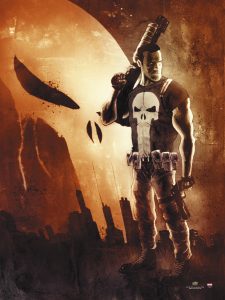 Australian artist Ben Templesmith depicts the Punisher standing ever vigilant over the city that holds his demons, as well as his salvation. Rendered in gritty inks and blending warm and cool tones, Speak Softly… (limited edition of 250) plays on the balance that Frank Castle holds within his life. For those with a darker taste, the limited variant …and carry a big stick (limited edition of 100) casts a sinister tint over the city and its keeper. These fine art giclée prints measure 18”x24” and are printed on archival 100% cotton 300GSM paper. You can order these and other Gallery Prints from our store here.