For over 25 years The Upper Deck Company has been at the forefront of quality and innovation. We are proud to maintain an award-winning portfolio of gaming and entertainment products that contain some of the industry’s best original works of art. We are excited to share exclusive interviews with some of our top artists bringing a look at the amazing people behind these amazing works. This is the Upper Deck Artist Spotlight Series.

UD: Ben, would you like to introduce yourself to the crowd?

Ben Templesmith: I’m Ben Templesmith, stubborn Australian living in Seattle who’s been doing comic books and various things related professionally since 2001. Especially creator-owned works, one of which was also turned into a movie, 30 Days of Night. 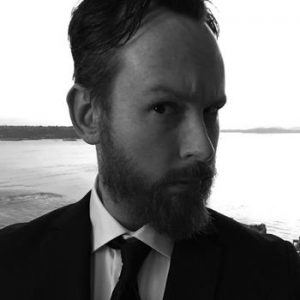 BT: It means being damn lucky, really. And being creative professionally, doubly so. I didn’t exactly create my own style. What comes out comes out. It evolves. Impossible to predict. It chooses you, rather than you choosing it. Sometimes I wish I had a choice!

UD: Can you describe the time when you first realized that creating was something you absolutely had to do?

BT: I started out as a newspaper cartoonist when I was 16, but I realized I wanted to tell stories when I read my first Marvel comic pretty much when I was an early teen. After that, I didn’t have a choice. Like I said, it chooses you, you don’t choose it! And I got lucky, in many ways. So many creative people sadly have to choose other things, to pay the bills, even if the urge to create remains.

UD: What kind of creative patterns, routines, or rituals do you have?

BT: Coffee. Lots of it. Sleep, and chaos. It’s all about waiting to get into the “zone” and when you are, not stopping until projects are done. I wish my time management was better, but it’s always a battle to be switched on when you need to be.

UD: Who is your favorite comic book hero or character?

BT: That’s always changing, but the Punisher, Ghost Rider, and the X-Men have always been up there.

UD: What were/are some of your favorite games to play? (Video games or board games)

BT: I am a horrible history geek, so I’m always playing strategy games set centuries ago. Especially the Total War series of games.

UD: What type of work do you most enjoy doing?

BT: It’s always going to be my own creator-owned comics. I mean, you can’t beat total freedom to tell your own stories. Though it’s always fun to play in someone else’s sandbox at times.

UD: What’s your favorite piece of work you’ve ever created?

BT: That’s always going to be the latest thing I’ve done. Until I move on to the next one. It’s too had to pick favourites.

UD: What is your dream project?

BT: Probably a comic where I just do stories set in the Mad Max universe!

BT: Already had it. Warren Ellis.

UD: With regards to the Punisher fine art print that you recently created for Upper Deck Gallery, what was your favorite part about working on this project?

BT: Well, the Punisher is one of my favourites. I’ve never been about the goodie-goodie “heroes”. Frank is much more my style. And getting the chance to do my version of him somewhat was a real buzz.

BT: Probably figuring out how to do the composition required in my style!

UD: Any closing thoughts or words?

BT: I hope I did him justice!

You can follow Ben and check out his art on his social media, which you can find below;