Welcome to our final preview about the upcoming Vs. System® 2PCG®: S.H.I.E.L.D. vs Hydra product!

Singularity is one of the most iconic supporting characters in the Vs. System® 2PCG®. And rightfully so, she is a living pocket dimension after all. And although her powers are as simple as thought for her to use in the comics, she has been doing too much too easily in the game for too long. We have decided to ban and replace her, much like what we’ve done before with Cosmo and Thanos. 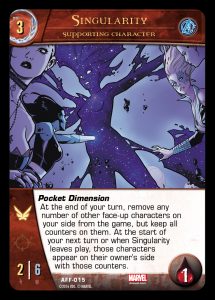 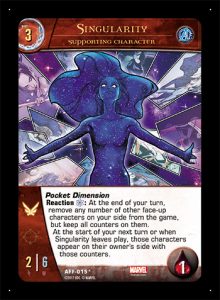 As you can see, her cost and stats have stayed the same. But she has new art — and Pocket Dimension is now a Reaction super power. The rest of her power is the same, but now she has to find the energy somewhere each time she wants to hide people. Please note the star in her set number (like Cosmo and Thanos before her) that denotes that she is a new card that replaces her old version.

But Singularity isn’t the only one interested in change in this set.

In Marvel Comics’ Secret Empire storyline, reality is re-written in multiple ways. Memories were altered, physical objects were changed. Some of this was done with noble intentions and some was the result of the manipulations of the Red Skull. In both instances, the source of this power was Kobik, the incredibly powerful, child-like physical manifestation of the Cosmic Cube. 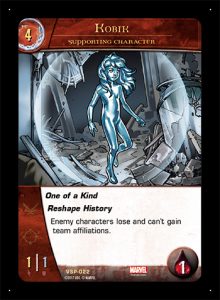 Kobik is the last limited edition promo for 2017, and our first neutral character (one without a team affiliation of her own). This means she can go in any Loyalty deck (sort of a nice irony there) but she can’t team attack with anyone (not that that’s really her thing). Please note that enemy cards will lose their team affiliations while on a side, but don’t lose them in hand, the KO pile or deck. So powers like Medusa’s Ruler of the Inhumans and She-Hulk’s Welcome to the Team will still work.

We hope you like change. Vs. System® 2PCG®: S.H.I.E.L.D. vs Hydra is bringing it to local gaming stores on November 29th.


Will this promo card work like it has previously? Meaning there will be a regular and promo art version in the first printing.
Or will Kobik as a whole only be available for a limited time?
I assume the former, but the wording in the post is unclear.