Today Upper Deck is happy to officially take a look at Ragnarok. Not the end of the world, but the official Thor: Ragnarok trading card set. Thor: Ragnarok stars Chris Hemsworth, Tom Hiddleston, Cate Blanchett, Tessa Thompson, and Jeff Goldblum and is the third movie in the Marvel Studio’s Thor series. It’s also the seventeenth movie in the Marvel Cinematic Universe.

Thor: Ragnarok has a 50 card base set featuring images straight from the film and features many of the characters, battles, objects, and set pieces from the Taika Waititi adventure. We have some images that we would like to show off. The base set contains key plot points from the movie with a silver FX border and has two parallel sets: one with a red border and another with a blue border. 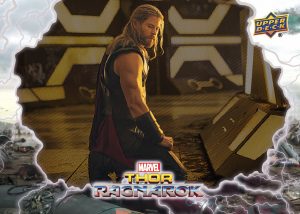 In addition to the base set, when you open packs of Thor: Ragnarok you’ll be able to find a set of Silver Foil cards that include some behind the scenes photographs called Behind the Lens. In this card we see Cate Blanchett dressed as Hela with director Taika Waititi. This is an amazing look at what kind of power and fear Blanchett brings to the role. 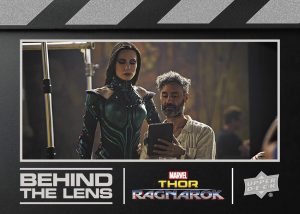 On top of that collectors will be able to find a series of cards called Grandmaster’s Contenders. These all depict different characters that interact with Jeff Goldblum’s Grandmaster. One of these characters is Mark Ruffalo’s Hulk, seen on the card below, who fights in the arena on Sakaar. 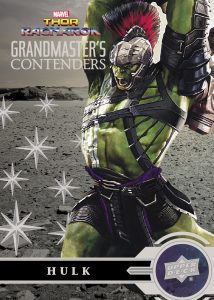 There will also be an insert set devoted entirely to Cate Blanchett’s Hela. These inserts have an overlay of Hela’s intimidating headdress. Hela represents a huge change to the Asgard we know and love, and her arrival fills Thor and the other characters with fear. The one below features an iconic image of Hela in her headdress. 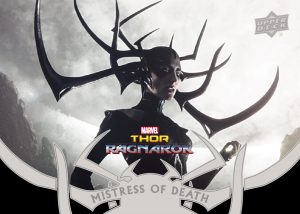 Finally, Marvel fans will be able to snag memorabilia featured in the movie in The Armory insert set.

Thor: Ragnarok will be out in hobby stores in December and will feature 4 cards per pack and 15 packs per box. Until then, you can see Thor: Ragnarok in theaters now!


Is there a checklist for this product? Can’t wait! Only a few more days!