Ready to change the world?

Upper Deck is proud to release the VS System 2PCG® expansion S.H.I.E.L.D. vs Hydra which features lots of characters and objects from the recent Secret Empire story. You can find tons of new Agents as well as some awesome One Of A Kind items in this new 200 count set. We’ve had a few preview posts already, and some awesome folks got their hands on copies early for a well put together tournament!

We looked at some S.H.I.E.L.D. cards that gave a peek at Black Widow and Nick Fury. It also gave our first look at the Agent keyword, a new Sam Wilson, and some cool equipment. Then we had a preview that focused on Hydra. We saw the Hydra High Council, the Soldier keyword and one of the Cosmic Cubes. Finally, we showed off the updated version of Singularity and the promo card Kobik.

So today all that and more are at your local game store! But before we leave you, let’s take a look at a few other cards! This time we’ll start with a Captain America villain favorite! Arnim Zola is a nuisance; hard to get rid of and every time he comes back he pecks at your hand. Hail Hydra! 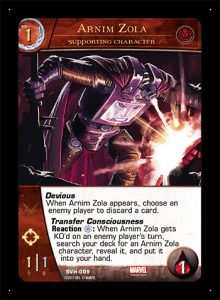 On the S.H.I.E.L.D. side we have someone else who has come back from the dead; Phil Coulson. Phil is a great leader and team player, so he has the Agent keyword – but he also gives his fellow S.H.I.E.L.D. team members Stealth, making Phil a powerhouse. 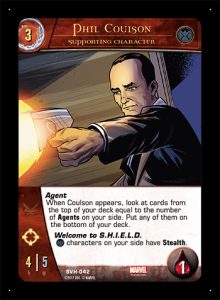