Welcome the new team to Legendary®: A Marvel Deck Building Game. The Champions debuted at the end of 2016 and were a direct result of the young heroes witnessing the events of Civil War II. Today we’re going to take a look at the titular team and some exciting new and returning mechanics.

Let’s take a look at a mechanic that is returning to the game for the first time since Legendary®: Dark City. The youngsters of the Champions try to take the less violent route if they can, which means having options. Versatile is a great way to show that, so our new characters bring this beloved keyword back to be used in new and interesting ways. 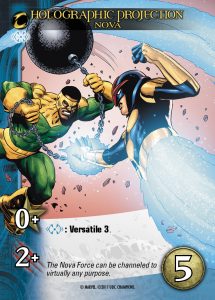 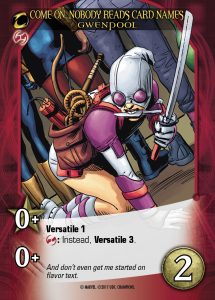 Gwenpool shows one of those new and interesting ways. At the beginning of the game, she’s a cheap way to have an option between 1 Recruit or 1 Attack, but if you build into Covert correctly, she becomes an easy way to get access to some much higher numbers.

The Champions have strong feelings about the way they protect people after seeing their seniors fight in Civil War II. In Legendary, this means they have a strong connection with Bystanders, so that becomes a focus of the mechanics we’ve explored here. 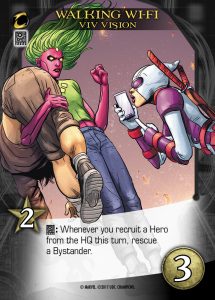 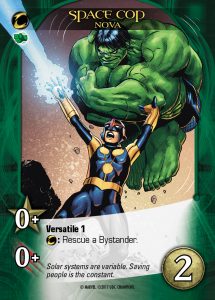 Viv Vision shows off a great alternative. Instead of fighting, Viv encourages you to recruit characters from the HQ in order to use her ability and gain Bystanders and points. Nova, on the other hand, promotes teamwork and offers an easy way to rescue Bystanders. 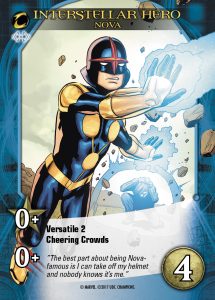 Interstellar Hero gives some options with Versatile 2 but also allows you to use your Bystanders to play the same card a second time. Cheering Crowds doesn’t allow you to keep playing the card over and over, instead, it gives a single card an encore.

Now that you’ve got a great taste for the fun we’re bringing in the 100-card Legendary®: Champions expansion coming early 2018, we’ll leave off until we return next time where we’ll look at another returning mechanic and a mechanic that’s new to this side of Legendary!

To where does the Cheering Bystander get returned? Top of the Bystander Stack?

The bottom of the Bystander Deck.

This set looks great already! Love the art! So glad versatile is making a return.

Gwenpool is my Absolute Favorite!!! I’m sad Issue #25 is her last under “The Unbelieveable” title. I hope she becomes part of something else soon. Until then, she’ll live on forever in my Legendary: Champions Deck!!! <3