Welcome back to previews for the upcoming Legendary®: Champions expansion! Last week we took a look at some of the new members of the Champions team, with their own Champions team symbol, and the return of Versatile and the new Cheering Crowds and the highlight of Bystanders. This week we’re going to look at two other keywords.

The first keyword is another returning keyword. Size-Changing is a fun return from Legendary®: Civil War that modifies the cost of heroes. Size-Changing is always accompanied by a class icon and allows players to reduce the cost of that Hero by 2 Recruit if they played a card of that class earlier that turn. Part of bringing these keywords back is a question of how to keep making them fun and engaging. So what are we doing with Size-Changing to keep it fresh? Well… I’d like to introduce you to my friend Totally Awesome Hulk who has two different icons for Size-Changing. Why is that cool? Because you can get a larger discount by playing both classes. 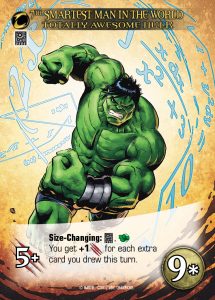 Size-Changing isn’t useful for just Totally Awesome Hulk. As a matter of fact, our last teammate changes her size all the time. So much, in fact, that it’s become kind of her catchphrase. Kamala Khan has been called Bigfoot, Big M, Bendy Girl and Giant Girl – but Ms. Marvel is most well-known for yelling “Embiggen!” when she’s ready to fight. 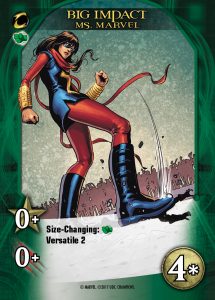 The other keyword we’re going to look at is Demolish, which is both new and returning. Demolish has been seen before in Legendary®: Villains but this will be its first time inserted in the classic Legendary®: A Marvel Deck Building Game. Demolish causes players to discard from their hand. When a card instructs you to Demolish, you reveal the top card of the Hero Deck, put it on the bottom and then everyone must discard a card with a cost matching the revealed card. Normally, this would come on Villain cards – and it would be a sort of attack from the villains and Mastermind to hinder the progress of the players. But the Champions have Gwenpool… 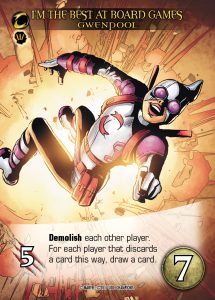 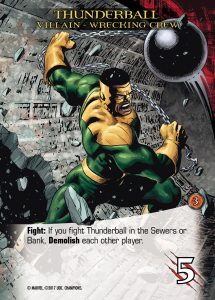 Now we have a look at the first Villain Group! The Wrecking Crew specialize in Demolish, and rightly so. The Wrecking Crew wants to get in your way by cutting your hand down. But they’re not the only ones you need to be afraid of. The first big villain the Champions took down was Pagliacci, and he brings some interesting dynamics to being a Mastermind, by always coming with a plan to improve his scheme! 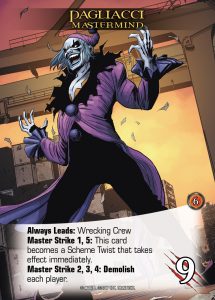 And that’s it for today! You might be asking yourself if we’re going to get another preview. And the answer is yes! We’re going to be looking at another returning feature, so stay tuned!


Finally another version for each of the four main avengers…I feel that my years of making comments on bringing Hulk back have paid off I hope we see some more of him or his common friends and foes.