Own The Moment with New Game Dated Moments only on e-Pack! 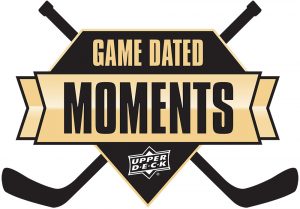 Available every Friday at 9 am (PST) starting on October 13th, Game Dated Moments packs will feature trading cards showcasing everything from Rookie Debuts and Record-Breaking accomplishments, to Breathtaking Goals and Incredible Saves from the past week in the NHL®!

Each unique pack will contain a single trading card highlighting a specific moment and will be available for one week only.* 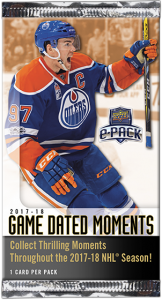 Collect throughout the season and get rewarded!

Just like with other Upper Deck e-Pack products, card collectors will have opportunities to receive more than just the Game Dated Moments packs they purchase. e-Pack users who collect throughout the entire 2017-18 NHL season can receive different achievement cards from three seperate time Periods on e-Pack! There is also a master achievement for those dedicated enough to collect every single Game Dated Moments card made available in the season.

Below is a run down of what achievements are available and how to earn them:

Don’t miss out on any moments! Be sure to check the e-Pack news feed every Friday to see what new Game Dated Moments packs are available in the e-Pack STORE!

Stay up to date on the newest Game Dated Moments cards by following the Upper Deck Hockey Twitter page HERE .Search using the hashtag #OwnTheMoment or check out our Facebook page HERE!

***Final Friday for the release of 2017-18 Game Dated Moments Packs is subject to change and is dependent on the number of games played in the 2018 Stanley Cup Final.