Today is a grim, dark day. But don’t fear, because you’re a Slayer! You and up to four of your friends are getting ready to lead Buffy, Xander, and other Scoobies to defeat the Big Bad and foil their twisted schemes to take over the town of Sunnydale – or the world!

We’re going to dive into some card previews to show off some of the cool new stuff you can find in Legendary: Buffy the Vampire Slayer. Buffy Summers is the key to the show, the Chosen One, so we’ll start looking at Buffy’s uncommon card: Death is Your Gift. This is one that shows Buffy shine when the Scooby Gang is in trouble. Death is Your Gift scales up the more trouble you’re in and spotlights one of the new mechanics: the Light and Dark track. In our previous blog post, Mark discussed how the track works. Death is Your Gift is an example of how the designers used the track. If it’s Dark, you get extra Attack for every Villain in Sunnydale. Which means the more trouble you’re in, the more butt Buffy is ready to kick. 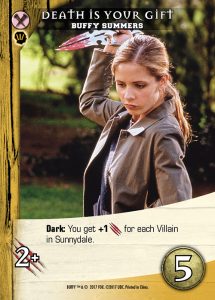 But not all the members of the Scooby Gang are as heroic and pure as Buffy. As a matter of fact, Spike begins the show as one of Buffy’s most feared enemies – but after time creates some uneasy alliances with her and the rest of the gang. His card set really focuses on this dichotomy, with each card having a Light option and a Dark option, making him variable. Oz and Willow, on the other hand, are some of Buffy’s closest friends that end up dabbling – or being consumed – by forces of darkness. Willow’s rare is incredibly powerful, but it represents her giving into the dark side of witchcraft and coming back as a villain unless she’s surrounded by her friends with the Sunnydale team symbol. Oz is much simpler, showing him giving in to his inner werewolf and the strength and healing that comes along with that. 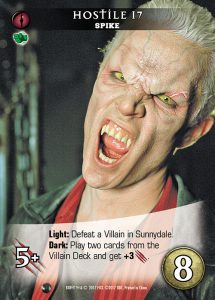 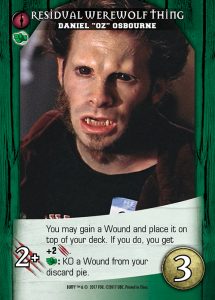 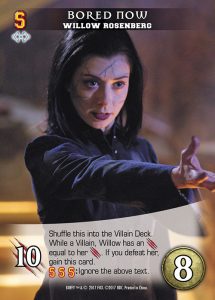 Now that we’re crossing the line to talk about light and dark let’s take a look at one of the toughest Big Bads; Angelus. In the 1700’s Angel was a dark and evil vampire who gained the respect of The Master and The First Evil for his brutality which garnered him the title The Scourge of Europe. Not only does Angelus fill your deck with wounds with his Dark ability and his Master Strike, but you can’t even fight him when you have a wound in your discard pile. This makes him quite difficult and challenges players to manage their resources carefully. 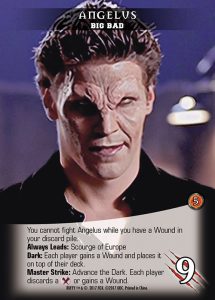 Finally, let’s talk about the first print run promo. Every release we’ve had this year has had a promotional card in it that will only be available in the first print run. In Legendary: Buffy the Vampire Slayer that card is the Dingoes Ate My Baby special Bystander card. This is Oz’s rock band that frequently played at The Bronze in Sunnydale. It makes sense, then, that when you rescue the band, they allow you to defeat a Villain at The Bronze for free. 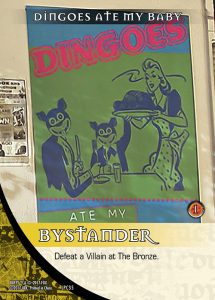 Now that we’ve taken a look at some of the new cards don’t forget that you can pick your copy of Legendary: Buffy the Vampire Slayer at your friendly local game store starting today!