High above the Earth, the city of Attilan in the Blue Area of the Moon is home to an isolated community of superhumans fighting to protect themselves and their way of life. Meet the premiere members of the Inhumans in UD Gallery’s newest fine art print! 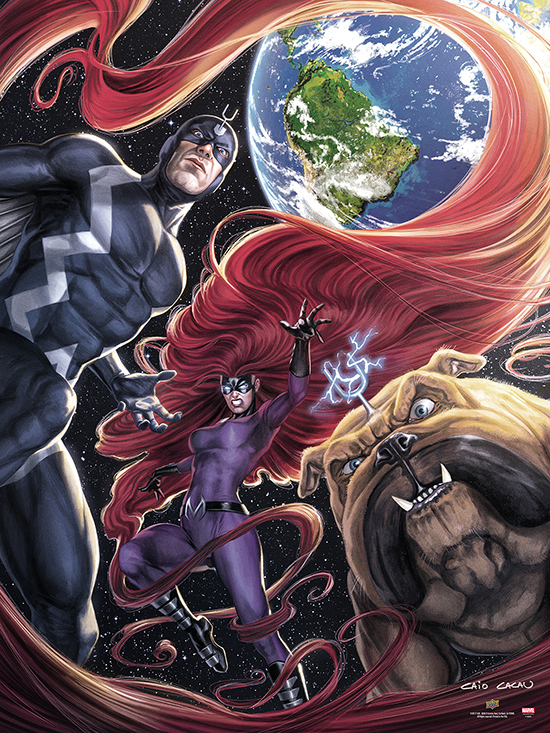 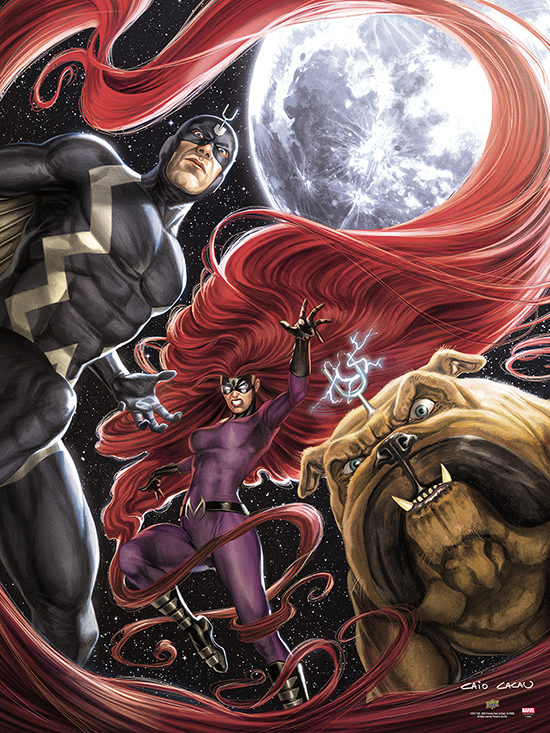 Led by the Royal Family, the Inhumans are a race of superhumans with diverse and singularly unique powers first introduced in Marvel Comics by Stan Lee and Jack Kirby in 1965. September’s fine art print features Black Bolt, the enigmatic King of the Inhumans with a voice so powerful that the slightest whisper can destroy a city; Medusa, the Queen of the Inhumans and a fiercely resilient warrior with the ability to move and control her prehensile hair, and Lockjaw, protector of the Royal family and one-ton bulldog capable of inter-dimensional teleportation.

We had the opportunity to sit down with up and coming Brazilian artist, Caio Cacau, who created the stunning imagery behind the September fine art print release. Read on to get to know the artist and his inspiration behind this amazing print that you can order now at UpperDeckGallery.com! 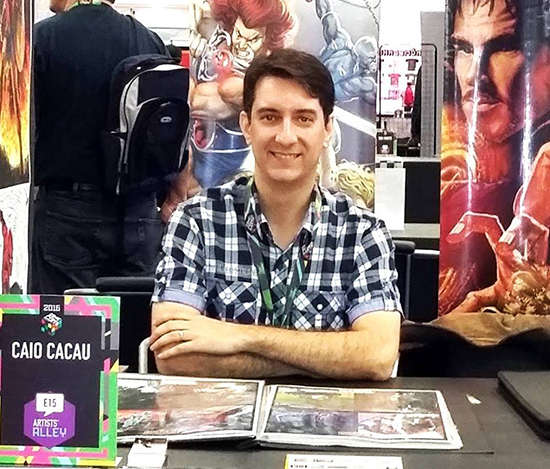 UD: Caio, would you like to introduce yourself to the crowd?
CC: I was born in and currently live in Sao Paulo, Brazil. I’m a self-taught artist; drawing since a very young age. It’s curious because no one influenced me to begin to draw, as I had no relatives or people around me who could draw. I grew up wanting to be an artist since always and as I have ever loved comics and super heroes, I always wanted to draw comics. I graduated in graphic design and when I realized I was good enough to get some work, I sent my portfolio to many publishers and was hired, first, illustrating books, some covers, working with storyboards and concept art. Later, I caught up with the comics! It was a very difficult struggle and took a lot of hard work to break into it!

UD: What does “being creative” mean to you? How did you create your own style?
CC: For me being creative means doing something different, unconventional, and getting away from the rules as much as possible. Creating your own style comes with time and years of work, there’s no escaping it, that’s how it works. Initially, every artist follows the style of their favorite artists. That’s what happened with me. I had (and still have) my favorite artists that inspired me a lot, like Jose Luis Garcia-Lopez, Marc Silvestri, Barry Windsor-Smith and Jim Lee. I grew up reading and enjoying their beautiful art works. I quite like Renaissance and Baroque art as well. Maybe these artists and a few others influenced my way of drawing today.

UD: What kind of creative patterns, routines, or rituals do you have?
CC: It is a mixture of process and flow. I do not have rituals, but I like to follow my schedules so things go smoothly. First of all, I need to sleep well and get up early because for me the morning is the best time that inspiration comes. I try not to work tired or too late, unless the deadline of the project I’m working on is too tight. I always try to rest a little or step away from work in the middle of the day; for example, I’ll take my son to school and pick him up every day. There are artists who take a nap in the middle of the afternoon to re-energize, but this does not work for me. And what helps me a lot to focus on my work is music; I listen to music all day long and forget the life outside. 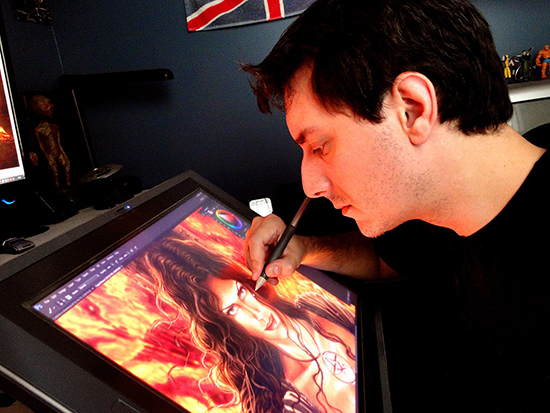 UD: Who are some of the artists that have inspired you?
CC: Well, I’ve previously listed some artists who have inspired me, but I like a lot of others like Alex Ross, Joe Jusko, Anry Nemo, Norman Rockwell, Gil Elvgren, Drew Struzan, Katsuhiro Otomo, John Buscema, Mike Deodato Jr. and many others.

UD: Who is your favorite comic book hero or character?
CC: I grew up reading comics, especially Superman and Spider-Man. In addition to these two superheroes being my favorite characters, I must also include Wolverine and the X-Men of the 80’s and 90’s. And I love Turma da Mônica, a popular Brazilian comic book franchise created by Mauricio de Sousa.

UD: What were/are some of your favorite games to play? (Video games or board games)
CC: I love and have always enjoyed playing video games. Nowadays I have little time to play but in my childhood and teenage years I had all the Nintendo consoles. My favorite games from that time were Mario Bros., Double Dragon II, Ninja Gaiden, Street Fighter II, and some others. Today I play a little with my son and we love playing all of the Lego games, Mario Kart, Mario Bros. and almost all super hero games.

UD: What type of work do you most enjoy doing?
CC: Without a doubt, comics!

UD: What’s your favorite piece of work you’ve ever created?
CC: I always like the most recent work I produce, but what I enjoyed the most and I found the finished work to be incredible was 2017 Fleer Ultra Spider-Man and Legendary: X-Men for Upper Deck. 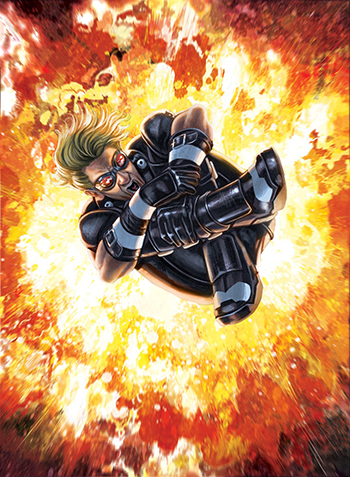 Cacau’s artwork in Marvel Legendary X-Men was really incredible as you can see from this Cannonball creation of his! 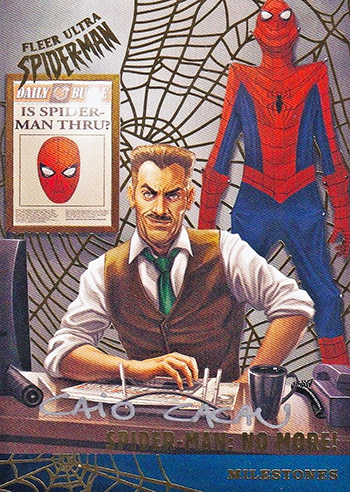 Cacau added authentic autographs to some of his cards in 2017 Fleer Ultra Spider-Man!

UD: What is your dream project?
CC: My dream project is to launch something that I write and draw myself, with my own characters. I’ll get there one day!

UD: Who would be your dream collaboration with?
CC: Chris Claremont, Brian Michael Bendis and Jason Aaron! That would be GREAT!

UD: With regards to the UD Gallery Marvel Inhumans fine art print that you recently illustrated, what was your favorite part about working on this project?
CC: I loved to play with the cold and warm light sources in each piece of art, the earth version and the moon version. Also, it was very fun to draw the hair of Medusa as a tool for framing the composition of the scene.

UD: What were some of the challenges that you faced?
CC: The composition. It’s always a challenge for me! After a million of doodles I was able to get to a final result.

UD: What characters were your favorite to illustrate?
CC: All of them! Black Bolt, Medusa, and Lockjaw!

UD: What characters were your least favorite to illustrate?
CC: None, actually. I love all of them!

UD: Any closing thoughts or words?
CC: I would like to extend my deep thanks to Upper Deck for everything so far, for the kindness they treat the artists, for the freedom of creation we have, and the opportunity to draw and paint some of Marvel’s coolest characters of the moment! It is always a pleasure to work for this company! Thank you so much! 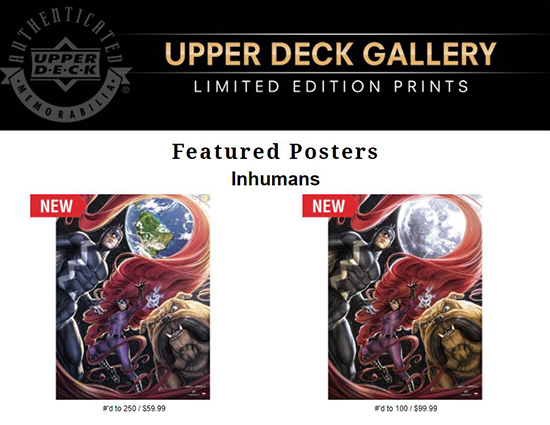