Spoiler Alert! The cards in Legendary®: Spider-Man Homecoming use images from the movie of the same name. These images may contain spoilers for those that haven’t seen the movie. Please be aware before you proceed.

As Legendary® nears its five year anniversary its focus has always been on the comic side of Marvel and bringing Heroes, Villains, and story arcs to life within the hands of players. For the last ten years Marvel has redefined modern cinema with their Marvel Cinematic Universe (MCU). The MCU has not only allowed comics fans to see their favorite characters battle their way across screens, but it has also ushered in new fans that may not have picked up a comic book before. For some, the MCU is the only way they know Marvel.

Each Legendary® expansion is not just new content for current players, but a way we can reach out to new fans and introduce them to this amazing game. What better way than to combine the MCU and Legendary®. For the first time Legendary will step into the Marvel Cinematic Universe with Legendary®: Spider-Man Homecoming! 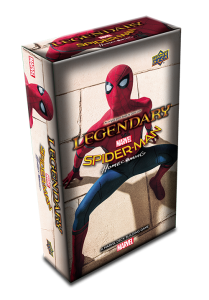 Marvel’s Spider-Man Homecoming is set directly after the events of Marvel’s Captain America: Civil War in which Peter Parker tries to balance his life as an ordinary high school student in Queens with his superhero alter ego Spider-Man. Peter receives help and guidance from not only his friends and family but also his mentor Tony Stark. 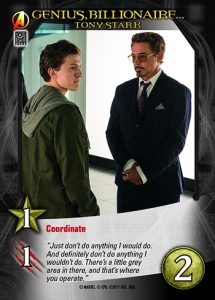 The popular keyword Coordinate arrives in Marvel Legendary® for the first time from the Legendary® Encounters games. It represents how Tony Stark and May Parker act as mentors to Spider-Man in the movie, helping him reach his full potential and become a true hero. 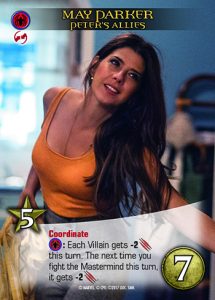 Coordinating allows you to let another player “borrow” one of your cards. It is a critical way to help other players defeat tough enemies. During another player’s turn, you can Coordinate with them like this:
• Discard a Coordinate card from your hand and then draw a new card to replace it.
• That player can now play a copy of the card you coordinated with them. (A copy counts as playing the exact same card including its Recruit, Attack, special abilities, and Hero Class symbol.)

You can only Coordinate one card to each player on their turn. However, multiple players can each Coordinate one card to the player whose turn it is, in order to give that player a huge advantage.
• If you are playing a solo game, once per turn, you may discard a card with Coordinate to draw a card.
• Coordinate is printed on cards in red text to make it easier to notice during other players’ turns. 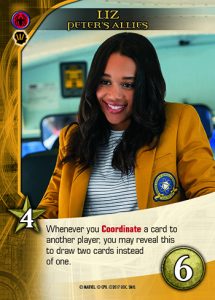 There are a couple of things about Coordinate specific to Marvel Legendary® that don’t apply to Legendary® Encounters:
• When you offer to Coordinate a card to another player, that player can decline. If so, you don’t discard that card and that player doesn’t play a copy of it.
• If you are playing with the Final Showdown, you can’t Coordinate during that Showdown.

Peter doesn’t always need help as he does have some of his own skills. 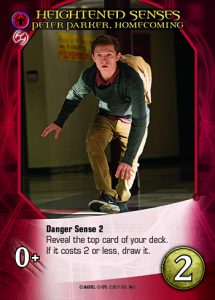 The Danger Sense keyword represents Spider-Man using his famous “Spider-Sense” superpower to detect danger and evade it. It also covers Tony Stark and others watching for threats and rapidly reacting to them. 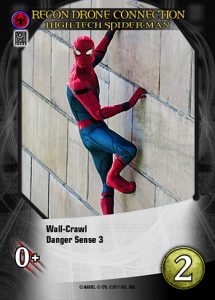 • Some cards say things like “Danger Sense 3.” This means “Reveal the top 3 cards of the Villain Deck. You get +1 for each Villain you revealed. Put all the cards back on top in any order.”
• Cards can say Danger Sense 1, 2, 3, or even 4, revealing that many cards.
• Several Danger Sense cards also say they have additional effects when they reveal particular kinds of cards. 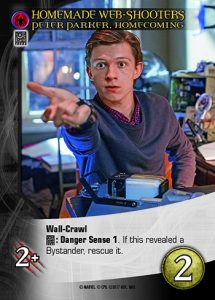 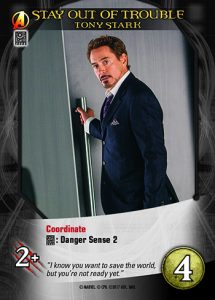 We hope you’ve enjoyed this week’s preview for Legendary®: Spider-Man Homecoming. Next week Evil will strike and it’s epic!

Legendary®: Spider-Man Homecoming hits stores on October 18th and is available now to pre-order at your local gaming stores.


First off, I’m really relieved that Coordinate will work like Dodge when played solo, since 3/4 of my games are such. Second, Danger Sense looks great and is really unprecedented. The ability to repeatedly delay some of the bad stuff is just as useful (if not more so!) than all those reveal-based synergies!

Finally, though not the most important observation – that’s a REALLY good picture of Marissa Tomei!!!


Oh, I’m also not as butt-hurt about the film images being used as I thought I’d be. Some of those shown above (particularly Homemade Web-Shooters) appear to have a bit of a Photoshopped cartoonish effect. Were the images in the set overall tweaked to be less of a shock to players?

And do you guys have plans for future MCU releases, like as in a big box?


It looks fun, yet there are so many unused characters in the comic universe (and some used too many [cough, Spidey, cough] that there is no need for a Spider-man movie set. Sure, I get that they want to cross promote with and capitalize on the movie. Still, I would think Marvel Legendary was doing okay enough to keep to the comics. There are so many options for unused characters such as Jen (She) Hulk, Red Hulks, Hellcat, Black Knight (good guy), Nova, Kate Bishop, Ant-man (both), Wasp, Classic Captain Marvel, Scarlet Witch, Beta Ray Bill, Sif, The Inhumans (that aren’t used yet), Machine Man, Celestials/Eternals, Moon Girl, Jim Hammond (original Human Torch), Ms. Marvel, Squirrel Girl, and many, many more. These are a few off the top of my head. And themed sets would work great, like Inhumans, Monsters Unleashed, Invaders, 1602, Old Guardians, A-Force, Champions, Runaways, Savage Land, Thunderbolts (not as Villains), etc. One of the primary reasons I love this game is because it taps into my love for comics, and if I want something from the Cinematic Universe I can visit mainstream games and the plethora of stuff they market for those.


Not to mention playable Doctor Doom, what we need is a Super Villain Teamup villains small box


I’ve never been a fan of photo images on cards.

I think it looks tacky and will look worse up against all the comic art on every other set.

The addition of coordinate is great though.


I love Danger Sense, but not nearly enough for me to buy this unnecessary expansion. Cmon guys, I like the creative mindset, but this seems lazy and like a cash grab. I don’t like it because its inconsistent with my collection being built up and I don’t like screencaps.
Looking forward to whenever they decide to include AntMan, War Machine, or a Base Set Reprint


This set will be a hard pass for me. I like the new mechanics, but the decision to go with screen caps over comic art is a huge mistake. Every other set is comic art and these cards will be a jarring change when mixed in.\


Could not agree more. which really sucks because, like most of us, I’m a completionist.

I don’t like the screen caps as opposed to art work.

On the whole, I think tying the MCU into Legendary makes a ton of sense. But not doing the art for just feels lazy. I’d love a happy medium where we can tie in the MCU, but sill go for the comic book art style.


Yeah this will be a hard pass for me as well. I have likely $500 invested in my legendary collection with all the expansions and such, but this is a jarring clash of art style in a game that’s all about mixing and matching. I’ve always spoke highly of this game for it’s heavily modular components but this expansion clashes with all of that because of the conflicting art styles.

There’s so much I want out of legendary that hasn’t been done yet and recent expansions (minus X-Men) feel like they are never going to do the last few A-listers and B-listers everyone wants.

Upperdeck if you read this, this is my wish list

Lastly just find a spot for Ant-Man and wasp please!!!