From time to time we love to spotlight our valued collectors on the Upper Deck Blog to showcase their collections. Lots of collectors look to start a “PC” or personal collection for their favorite players or the best players on their favorite teams. Such is the case for Tom Poray who loves the New Jersey Devils and in particular; Martin Brodeur. This is his story:

“I guess you could say my card collecting story began many years ago as a young New Jersey Devils fan. I grew-up collecting hockey and baseball cards. I loved the thrill of opening packs and making deals with friends. As a Devils fan, I was very excited when Martin Brodeur began to emerge as an elite goalie.

“My 1st Brodeur card was of course his first card from Score. 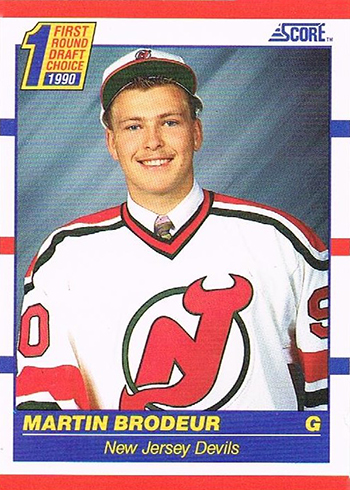 “I love this card simply because it is a smiling kid who has no idea what his future will hold. The dream of a Stanley Cup I am sure was on his mind. I don’t think any of us could have imagined the ride we were in store for at the time this card was first issued.

“As I got older collecting took a back seat and my cards were stored away for many years. About three years ago I rediscovered my love for cards and collecting. I decided that I was going to become a more focused collector and only try to acquire Brodeur cards. That’s when I discovered Twitter and the amazing collecting community that exists there. I also attended at some card shows and scoured online to try and hunt down as many different Brodeur cards as I could. The key was that I didn’t want to spend a lot of money, but I wanted to have a lot of fun. When Marty announced his retirement in 2015 I decided then that I would try and collect one card for each of his 691 wins and none of those cards could be the same. And so began my hunt.

“The first person that I really connected with was David P. on Twitter. He was a wealth of knowledge and took the time to explain the ins and outs of the hobby. Through him I had the pleasure of meeting Stephen Z. on Twitter. Stephen was another amazing person with a wealth of knowledge. We finally met and worked a trade and below is one of my favorite cards from that trade. 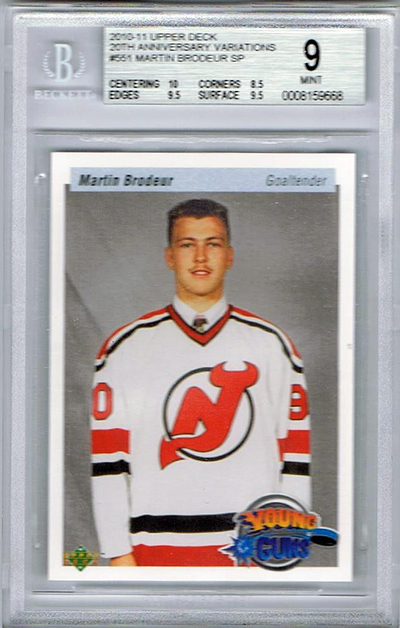 “This is another one of my favorite cards showing a young Marty. And I have to say that I love the mustache!

“After becoming friends with David and Stephen on Twitter, the collection really began to grow. People were offering trades or just sending me cards, which was unbelievable. It helped to share what my goals were online and friendly fans helped me along in my collecting journey.

“Around this time I also met Dave H. on Twitter. Not only was he a fellow Canadian, but he was also a massive Devils fan with an amazing knowledge of cards. Dave and I chatted regularly and he sent so many cards that I hold near and dear in my collection that I can’t thank him enough. I will return to a card that Dave sent at the end of this post.

“Another person that I had the pleasure to connect with was Lucas S. on Twitter. Not only was he a Devils fan, but he also lived in the same city we were able to complete some trades and such in person. 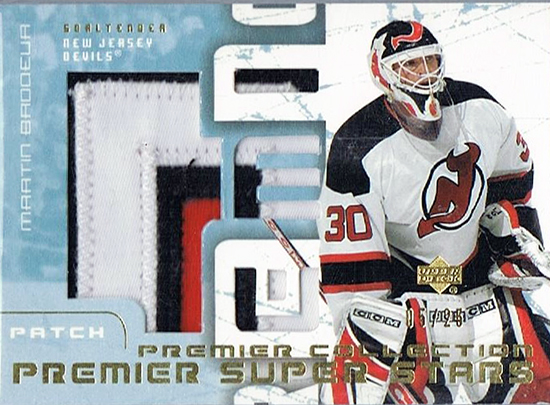 “This is a card that I got from Lucas when we met up. To me this is just a beautiful patch card and I absolutely love this card. It is one of my favorites in my collection.

“As time went on I kept engaging with more and more people and the collection kept growing. I had the pleasure of connecting with one of the nicest guys in the hobby; Stephen C. on Twitter. He was an incredible guy and always so positive to chat with. He too sent me additions to the Marty collection.

“About a year ago I began chatting with Rene L. on Twitter. He too was an amazing guy with an incredible story who has been featured on the Upper Deck Blog. And he too was kind enough to send me Brodeur cards for my collection.

“A few months ago I was sent close to 100 cards by Stacey S. on Twitter because he had come across some Brodeur cards and heard that I was a collector. Imagine that just sending a random person almost 100 cards out of the kindness of your heart. I was floored!

“After receiving that pile and many more, I decided it was time to count them. In May of 2017 I had arrived at 685 cards. I couldn’t believe that I was so close to my goal. In chatting with Dave H. he had told me that once I reached 690 cards I should stop as he wanted to send me the final card in my collection. So after picking up a few more cards that day came in June of this year. 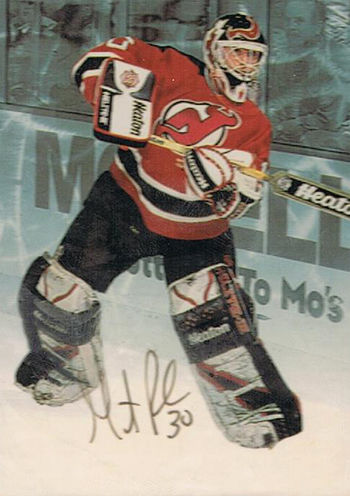 “Card #691 is a beautiful hard-signed autograph and a throwback to how I remember Marty with his old equipment and playing the puck with the best of them. One thing I find funny about this card is in the bottom right corner. My nickname is Tommo, often spelled Tomo. So it seems fitting that it almost seems to spell my nickname. I guess it was destiny that this card found its way to my collection. 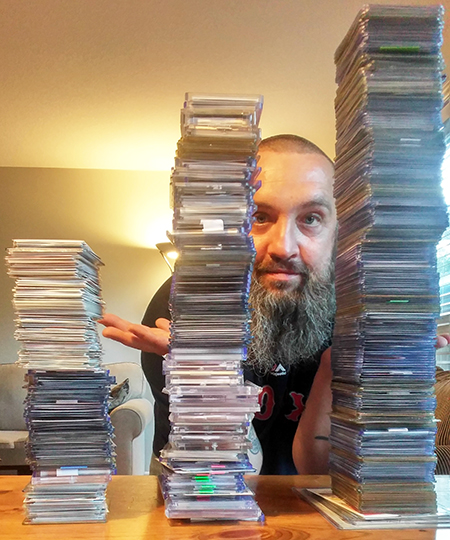 “Reaching this milestone has been an incredible journey. It has been such an awesome pleasure to meet so many amazing people during this process that I am proud to call my friends. One of the most important things for me was being able to share this quest with my daughters. They love going to card shows and as a father there is no greater feeling then doing something you love with your kids.

“So is my journey over? The simple answer to that is no. I plan to continue collecting Brodeur cards and memorabilia. And I have one of my biggest challenges ahead of me. In 2009 my Wife and I were married. Amazingly it was a sports themed wedding and we chose to enter our reception in our hockey jerseys. 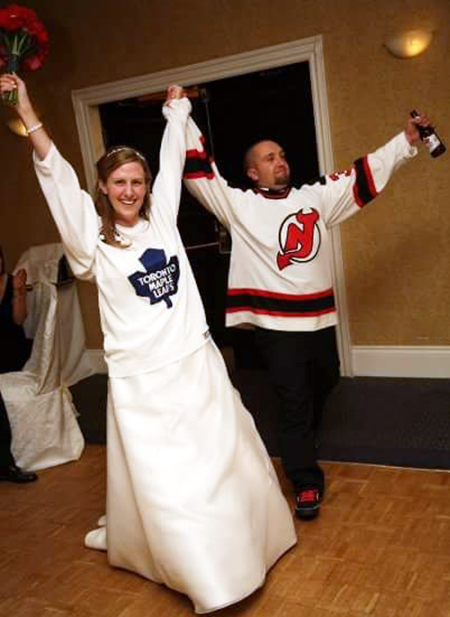 “Yes, I married a Leaf fan. And yes I wore Brodeur’s #30 on my back that day. The reason was simple. For so many years he was that rock that stood behind his team. He faced adversity and triumphed and proved that you can achieve anything. Basically he was to his team what I hope to be for my wife and my family. Like Marty, I hope to be a presence that is always there and can be trusted when times are tough no matter what happens.

“So my next mission is to one day meet Marty to have him sign my wedding jersey. That jersey has such a special meaning and what a fitting end to an incredible journey it would be.

“I want to end this by saying thank you to everyone who helped me achieve my card collecting goal and to all the friends that I have made along the way. As a Devils fan I also want to thank Marty for bringing us years of excellence and a few Stanley Cups as well. To have so many great memories captured on these trading cards is incredibly special.”


This was such a fun collecting journey. Thank you to Upper Deck for letting me share it!