Traditionally early season NHL® trading card releases lack something most collectors value in the form of solid rookie talent. Upper Deck’s agreement with the NHLPA does not allow any rookie cards to be produced until a player skates in an official NHL® game. Each year Upper Deck has a cutoff date for rookies to appear in trading card products for the season. Then late season call-ups become members of a carryover rookie class that have their first rookie cards inserted in early season trading card releases like Upper Deck MVP, O-Pee-Chee and Artifacts in particular. Carryover rookies provide much of the instant gratification for collectors in the form or rookie card offerings in these sets, but usually there are only a couple of stand-out players in a carryover rookie class. That is not the case for the 2017-18 NHL® season.

For this upcoming season, collectors are in luck as the 2017-18 NHL® carryover rookie class is one of the strongest in ages. Don’t take our word for it however. Here’s is what Beckett Hockey editor Stephen Laroche had to say about these “Young Guns” that will debut in products in the coming months like 2017-18 NHL® Upper Deck MVP (August release), 2017-18 NHL® O-Pee-Chee (early September release) and 2017-18 NHL® Artifacts (late September release):

“The carryover rookie class for early 2017-18 NHL® hockey card releases is perhaps the best one to date,” said Beckett Hockey Editor Stephen Laroche. “With over 60 eligible players, there are some names that collectors are going to want to chase as soon as their cards hit the market and others that they may not have paid a lot of attention to as well. 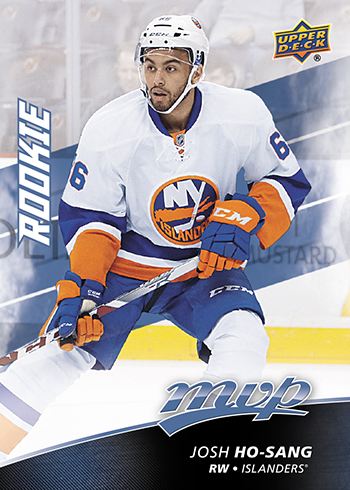 “One of the players I was looking forward to seeing the most as the regular schedule drew to a close was Josh Ho-Sang of the New York Islanders. While some in the hockey establishment may have mixed feelings about his occasionally outspoken personality, he is the type of player that the game needs. He’s brash, confident, and backs it up with plenty of talent. Penguins fans also may not like the fact that he wears number 66, too, but you can’t deny the fact that he could have a bright future in the game.

“One great thing about some of the rookies that debut late in the season is that they are making the transition from the collegiate ranks to the NHL and people are talking about them. This upcoming season may in fact see one of the best groups of strongly-hyped college players to hit the hobby all at once – and there may be even more when the 2017-18 season begins. 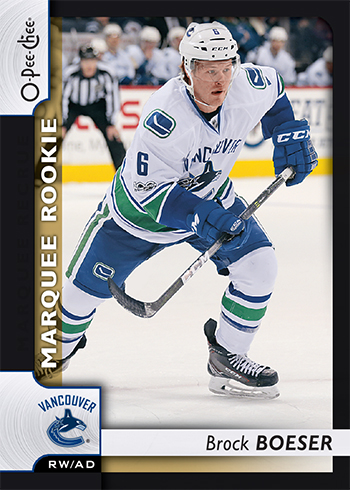 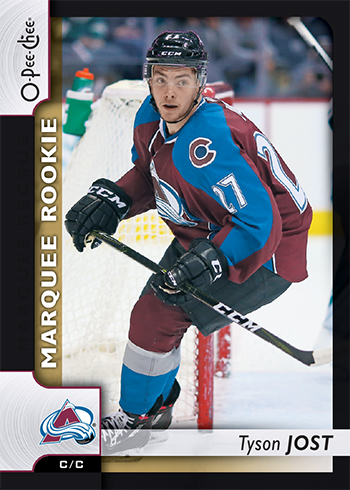 “Looking at the big names making late debuts, the ones that stick out tended to have something in common – time spent playing in the NCAA. Brock Boeser of the Vancouver Canucks and Tyson Jost of the Colorado Avalanche both starred at the University of North Dakota and they play a key role in the future for teams that have struggled as of late. 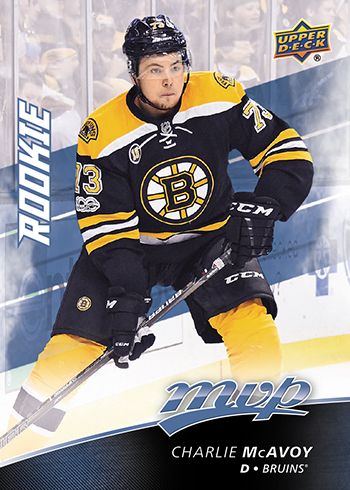 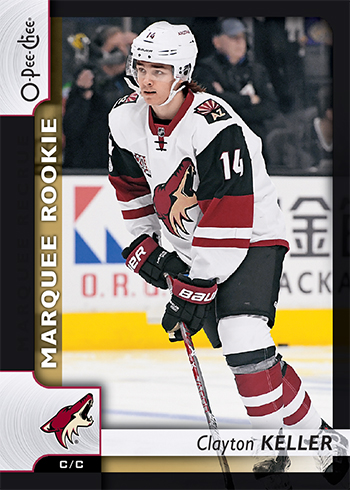 “Hockey East Rookie of the Year, Clayton Keller of the Phoenix Coyotes, was part of the American squad that won gold at the World Juniors and one of his teammates there and at Boston University was Charlie McAvoy. Already a sensation with fans in Boston due to his play for the Bruins in the first round of the playoffs, his card is bound to be in demand. 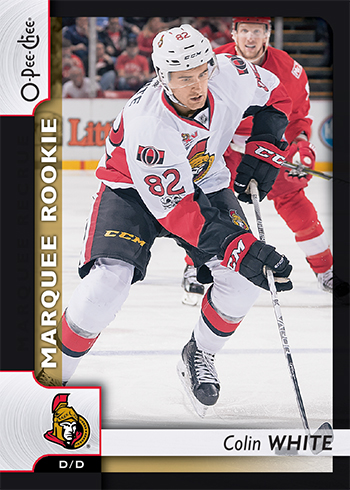 “Another player to consider is Colin White of the Ottawa Senators. After finishing up with Boston College, he got a brief taste of the AHL before being called up to the big club. As the Senators had a great run in the playoffs, look for his profile to keep growing in the hobby. He was also part of that amazing American team at the World Juniors and many of the talents on that roster could make noise in the coming years. 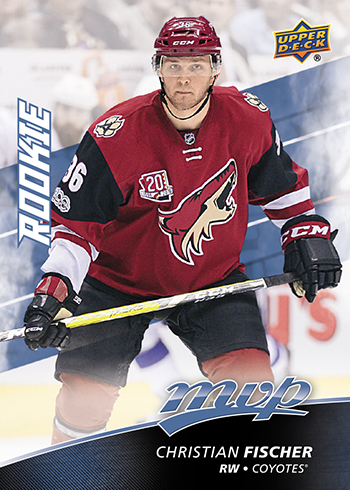 “Every rookie class seems to have a couple of players that turn out to be hobby dark horses. Look at 2016-17 and the emergence of Pittsburgh’s Jake Guentzel as a force on the ice and among collectors, too. This year, there are a few that I could see making an impact next season and beyond. Eric Comrie of the Winnipeg Jets could be a missing piece in the puzzle as the club looks to finally arrive as a serious contender. Christian Fischer of the Arizona Coyotes had a fantastic debut season for the farm team in Tucson and scored three goals in a short tour with the parent club. In fact, there are a lot of great prospects in the Arizona system that can be had for bargain prices at this point and a lot of these kids could pan out.” 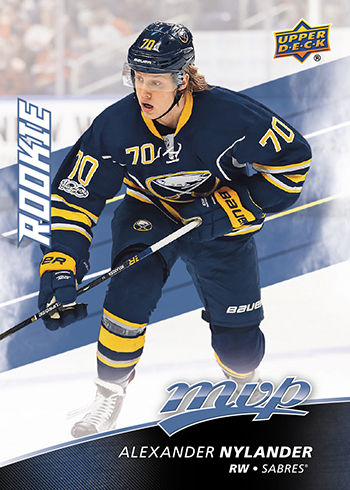 “The American Hockey League is also a perfect place to watch for some excellent prospects as such a huge percentage of NHL talent plays at least one game at that level at some point in their career. Normally, a player finishes their junior career before making the jump to the AHL, but there were a couple standouts which transitioned there as teenagers and might play a key role in the future success of their teams. Alex Nylander decided not to return to the OHL and had a strong start with the Rochester Americans before being called up to make his NHL debut as the Buffalo Sabres faced the Toronto Maple Leafs – who had his brother, William, in the lineup. Over in Manitoba, Jack Roslovic had a great start to his pro career with 48 points in 65 games for the Moose, but he also helped the United States to a gold medal at the 2017 IIHF World Junior Championship before skating in his first NHL game.” 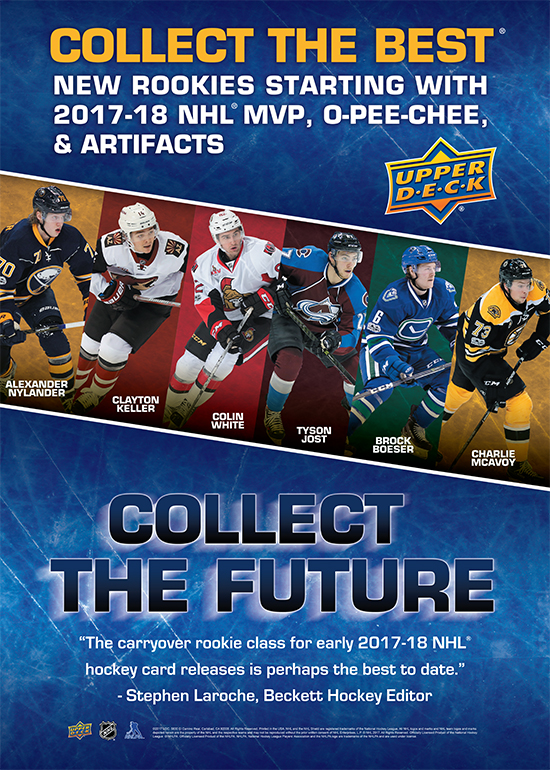 
Julius Honka?????? He at least played during the regular season. Is he a carryover, or did you miss another Dallas defenseman.


Excited to start building a Colin White PC. This kid is going to be good….who am I kidding, he’s already good!


Will you be including Evgeny Svechnikov from the Red Wings?