When Vs System® 2PCG®: A-Force was released in 2016 the Supporting Character Nebula was introduced:

Some players thought Nebula’s design was interesting because she cared about whether your Main Character was Evil, while other players were more intrigued by the last two words in her text. 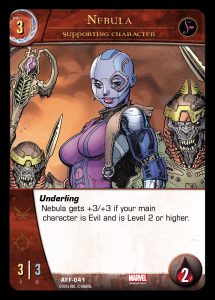 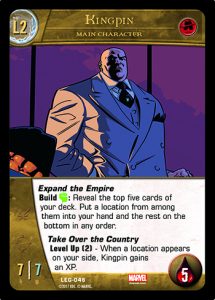 “Wait,” you might be thinking, “that’s just Kingpin’s Level 2 Main Character. Why is that special?”

Look again. It’s actually a new version of Kingpin’s Level 2. Instead of adding a new super power, it adds a new Level Up power which leads to this: 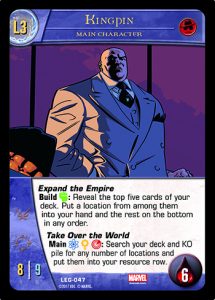 So how does this all work?

In Vs System® 2PCG®: Legacy, eight existing Main Characters (one from each current Marvel team) will now have an alternate Level 2 version and a new Level 3 version. When your Main Character levels up the first time, if it has two different Level 2 options, you choose which one to level up into at that moment.

At the beginning of the game you must show your opponent each Main Character you might level up into. (So if you only bring Kingpin’s old Level 2, you can’t pull his new Level 2 out of your backpack later in the game.)

We hope you have enjoyed today’s Vs System® 2PCG®: Legacy card preview. Which Main Characters do you think need a Level 3?