Upper Deck Compendium: An Inside Story from an Enthusiastic e-Pack NHL® Collector

My experience with Upper Deck e-Pack™ has been nothing short of spectacular. I first learned about the online trading site through SportsCardForum.com, the same day 2016-17 Upper Deck NHL® Compendium was released. I read a thread that was talking about collector’s needs and wants. When I created my e-Pack account, I wasn’t sure what I was getting myself into. It didn’t take long for me to fall in love. 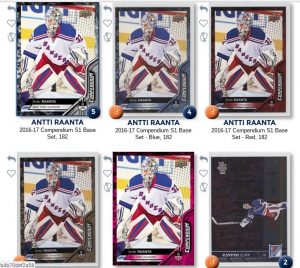 I’ve been collecting sports cards since I was about 5 years old. I started using trading card sites when I was in high school. I think every collector can agree that shipping cards on a daily basis can get tiring & costly. Upper Deck e-Pack™ is a virtual site which allows users to trade cards from their collection instantly. No bubble mailers, stamps, or time wasted. Collectors can complete dozens of trades in a matter of minutes! 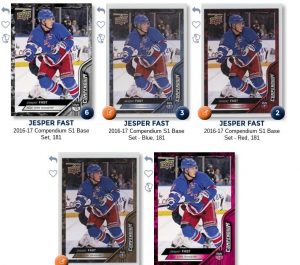 When you first sign up for e-Pack, you are given a free pack, which can be claimed every day when you log in. I really enjoy this feature because it rewards loyal collectors by helping them build their collection. Another aspect of the platform I enjoy is the Sports Public Forum where users can post their needs/wants so others can interact and trade. The hockey card community is fantastic and I’ve met a lot of great people on the Upper Deck chat. 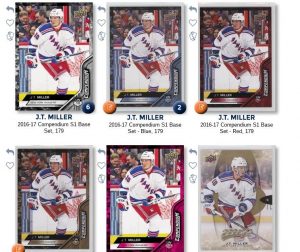 Upper Deck’s Compendium was the first product that I collected on Upper Deck e-Pack™. Compendium is exclusively online, and is not a product that is offered in stores. I live in North Carolina and there are not many card shops near me, so having the option to collect this set online was really cool. Compendium is also an affordable set for all collectors. Packs are on sale for just .99 cents, boxes are $24.99. Upper Deck Compendium also allows users to collect “rainbows” of their favorite players, which makes the e-Pack experience fun and rewarding. Most of my favorite players aren’t popular, so they don’t have many cards in other products. Compendium will have cards of almost every active NHL player! Given that, putting together a rainbow of a certain player adds an extra level of excitement, since these cards are limited and only offered e-Pack. 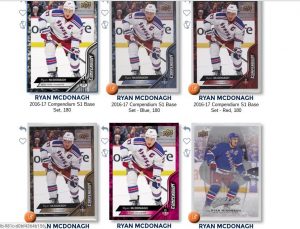 Upper Deck e-Pack™ is a friendly environment and is easily accessible from your computer, tablet or smartphone. I’ve introduced the site to my best friend and girlfriend, both whom have never collected sports cards before. They have both said how easy it is for a beginner to get started and learn the hockey card hobby. I’m excited for the future and I can’t wait for other products to be released. Thank you Upper Deck for all of your hard work!

Chris has been an avid trading collector since 2000. His early collections focused around his love of New York area teams such as the Yankees, Knicks, and Rangers. Through the years his focused has changed and narrowed to his favorite sport hockey. Chris and his girlfriend are very active on Upper Deck e-Pack™ and are always looking for New York Ranger cards. His username is CRVALLELY, so go make a trade with him!