Rookies on the Radar: Thomas Chabot of the Ottawa Senators

The 2016-17 NHL® Rookie Class has already proved they are set to be the future of the hockey as many are challenging veterans for league leading statistics. Thomas Chabot (pronounced Shab-Ott) of the Ottawa Senators is one of the young prospects in the class who took the hockey world by storm recently during the 2017 World Juniors Hockey Championships. We get a glimpse of many future stars during this tournament every winter, but Chabot emerged as a dominant powerhouse this year. Already putting up heavy minutes on defense, after an injury to another blue liner, Thomas Chabot had no choice but to step up and play around 30 minutes a game for Team Canada. He finished the tournament with four goals, 10 points, and tournament MVP honors. He was drafted by the Ottawa Senators in the 1st round (18th overall) in 2015 NHL® Draft. He ended up playing one game with the Sens early this season, so this will be the year to stockpile his rookie cards and hope for a coming out party in the pros soon. The Senators organization couldn’t be happier with Chabot’s performance and we’ll likely see him as a full-timer on the blue line next year for Ottawa logging big minutes.

Here are some of the reasons you’ll want to pay attention to this “Young Gun” with the Senators:

@Dave_Cards – Next season I will be calling them the Chabottawa Senators. 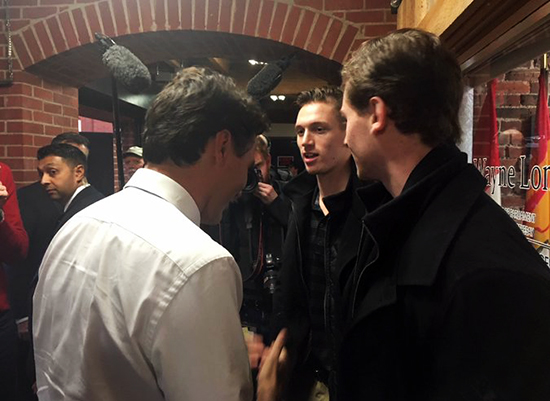 Here are just some of the cards you’ll want to be on the lookout for from Thomas Chabot from Upper Deck’s Team Canada World Juniors product and new Upper Deck NHL® releases. Worthy of note, Chabot has rookie exchange cards in 2016-17 NHL® MVP and Artifacts products. 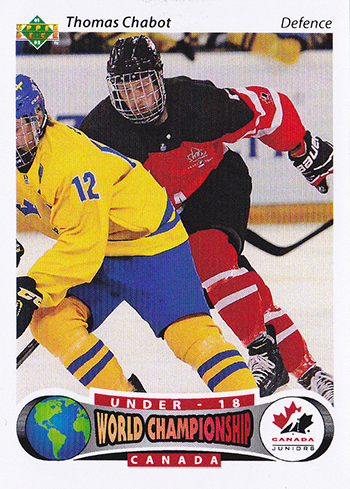 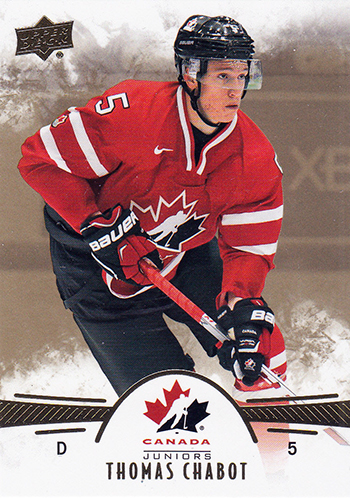 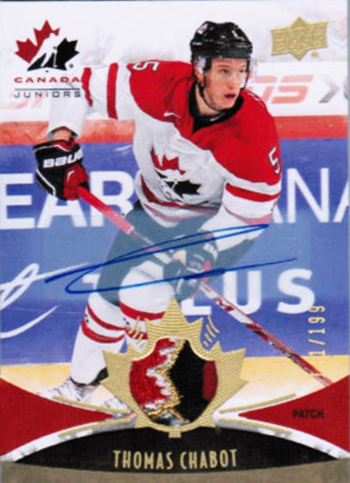 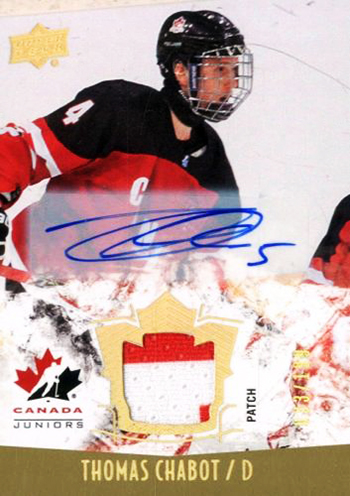 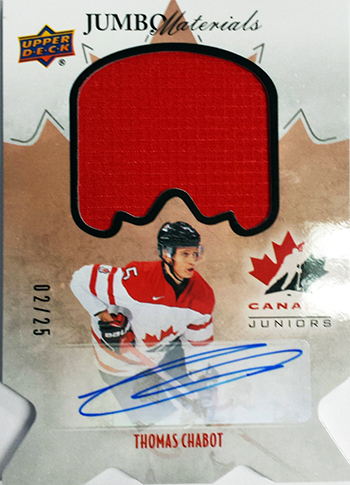 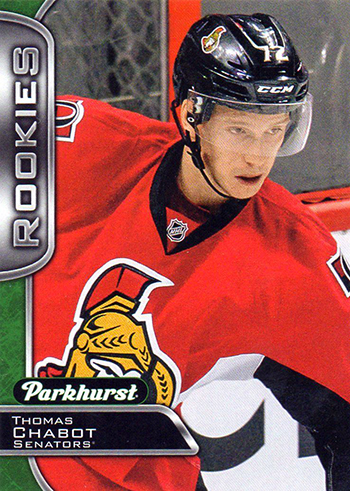 Parkhurst is a great low-cost option to score Chabot rookie cards this season. 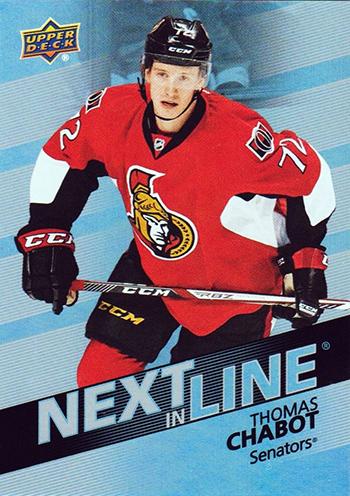 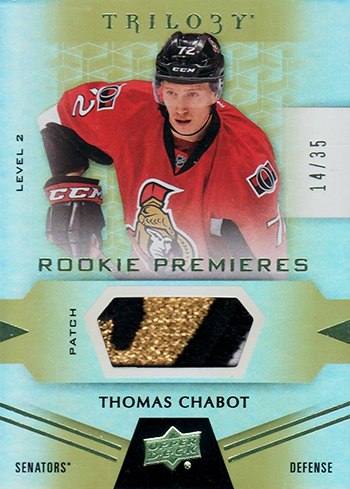 Collectors can find some pretty dazzling memorabilia cards of Chabot in 2016-17 NHL Trilogy! 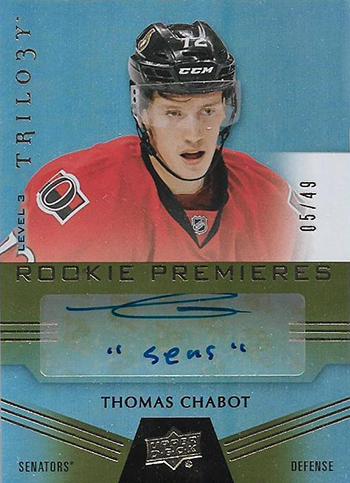 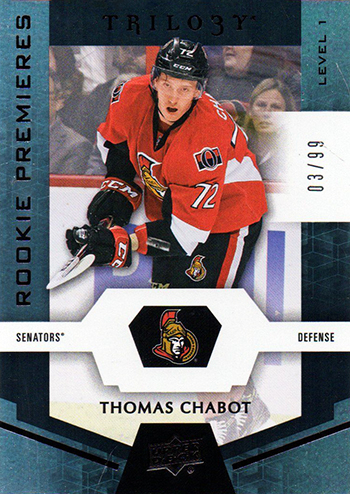 There are different levels of rookie cards to collect in Trilogy for Chabot. 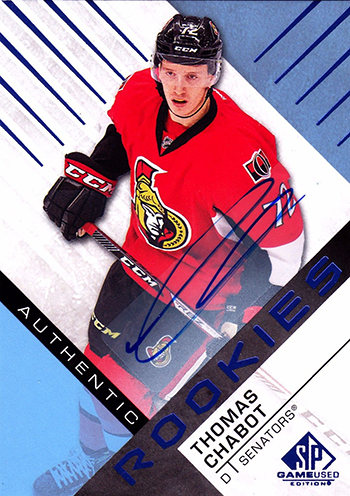 Collectors can also find a variety of Chabot rookie content in SP Game-Used out in stores now. 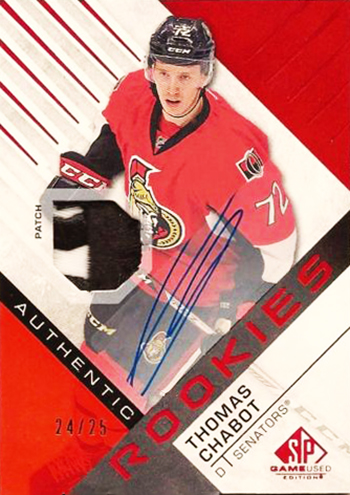 This patch autograph card of Chabot from SP Game-Used is a beauty! 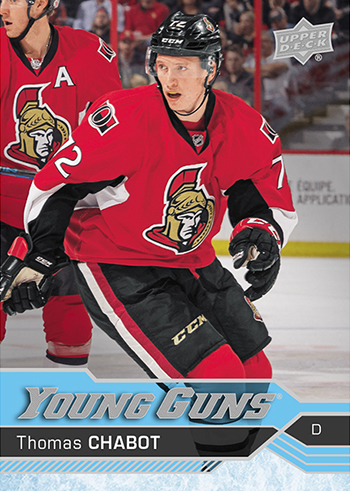 Chabot’s Young Guns rookie card will debut in February in 2016-17 NHL Upper Deck Series Two and is sure to be in high-demand!