Coming off a record breaking performance last weekend at the Sony Open in Waialae, Hawaii; Justin Thomas’ popularity has never been higher! The 23-year-old has continued to make a name for himself in the PGA becoming one of the most sought after prospects for collectibles in golf today. His performance and record play have cemented Thomas in the annals of golf history records, and you too can share in the celebration.

Upper Deck’s 2016 Goodwin Champions is a favorite with collectors as it features the best of all sports into one product. Here you can you can collect cards featuring autographs of all the top stars in sports including Justin Thomas!

Look for cards that feature autographs, inscriptions and even player-worn material memorabilia from Justin Thomas himself. These cards are quickly becoming a “hot commodity” in the hobby and the Upper Deck e-Pack™ marketplace. With Justin’s solid play and bright future, expect his collectibles to continue to be in high demand given Goodwin Champions is the only product to date to have them.

Below are some examples of the types of cards you can randomly pull in packs of Upper Deck Goodwin Champions in hobby shops or on e-Pack: 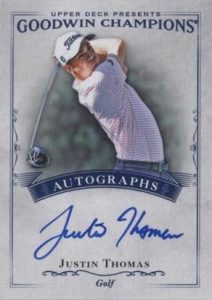 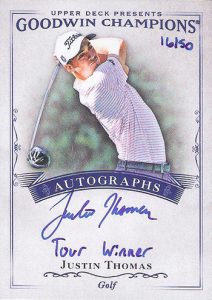 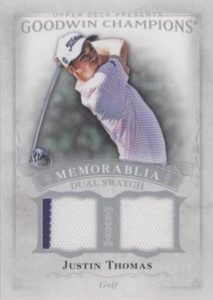 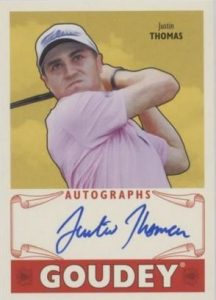 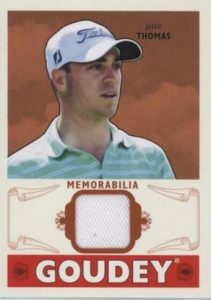 The time is now to find the most sought-after collectibles of one of golf’s brightest stars in packs of 2016 Goodwin Champions! Find packs, boxes and cases at your local card shop or on the Upper Deck e-Pack platform.