In the Legendary® Encounters: An Alien™ Deck Building Game Expansion, one player can now take on the role of the Queen Mother, the supreme ruler of the Xenomorphs, with her own playmat, deck, and desire to destroy the Human players. 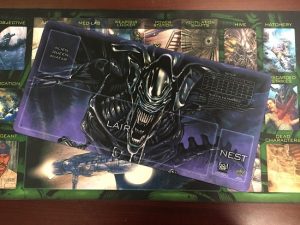 The Queen Mother starts with the same kind of deck as the players, but she has her own Nest and Lair (like the humans’ Barracks and HQ) made up of four Alien characters: 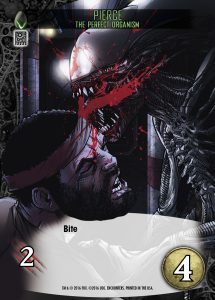 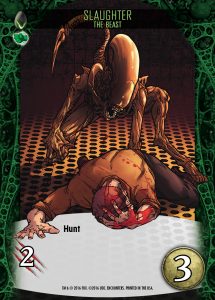 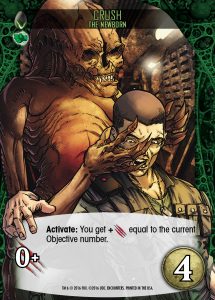 and Life Cycle (which represents various stages of a Xenomorph’s existence). 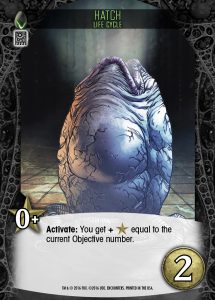 During the game, the Queen Mother will recruit characters to make her deck stronger, but unlike the players she has several different ways to spend Attack.

She can always spend Attack to optionally scan a room. (It works like a player scanning, but she doesn’t have to turn the card face up if she’d rather keep it a surprise.)

She also has four different Keywords which “unlock” different ways for her to spend Attack that turn.

Bite allows her to attack a player by spending Attack equal to its Defense. She gets to look at the top two cards of the Strike deck (because she has two mouths) and force the player to draw one.

Grab allows her to steal a character from the player’s HQ by spending Attack equal to its cost.. The character goes into her discard pile (representing it getting cocooned and impregnated). When she draws it again (representing the new Xenomorph bursting from its chest), it gets placed into the Combat Zone, loses all its text, and is now an Enemy — Alien with [Attach Symbol] equal to its [Cost].

Hunt allows her to spend Attack to discard cards with that cost or less out of the player’s hands.

Rush allows her to add more Hive cards to the Complex.

There are four different Queen Mother enemy cards, each describing a different characteristic of her. During setup, one is secretly selected and placed on the bottom of the Hive. Once it’s revealed, it must be fought similarly to an enemy player: You must spend Attack equal to its Defense to force it to draw Strikes. 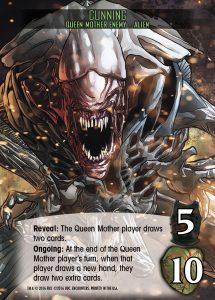 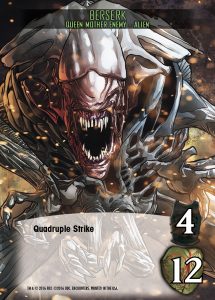 We hope you enjoyed today’s preview. Tune in next week when we give you a hard time. The Legendary® Encounters: An Alien™ Deck Building Game Expansion hatches in stores this December 7th and is available for pre-order now at your favorite local gaming store.