Making a Monster: What it Takes to Bring Upper Deck NHL® Young Guns to Life

Here’s the problem. A normal trading card release takes about 14 months to properly bring it to life. Rush jobs can be done in maybe nine months. Maybe. Promotional sets can be done pretty quickly, sometimes in a matter of weeks, but they seldom have any technology incorporated in them like holograms or foil printing. The NHLPA has a rule that no player can be featured on a trading card until they have a played in an official NHL® game, which leaves Upper Deck just shy of five weeks to get the company’s most popular rookie cards, known as the “Young Guns,” created. Hockey card collectors look to early November like a holiday. There are more than a few who will take a day off work to open a case or two of Upper Deck Series One NHL® trading cards in an effort to put the set together, find any hidden gems and collect their “Young Guns” rookie cards. This season the product will release on November 10 featuring rookies like Auston Matthews, Patrik Laine, Jimmy Vesey, Jesse Puljujarvi, Matthew Tkachuk, Mitch Marner and others who only made their debut slightly over a month prior. So how does Upper Deck do it?

First is the planning. Upper Deck’s product development and brand teams work in a coordinated effort to plan for which players should be making their debuts and reserves slots for them with a variety of back-ups secured. All the other base cards and subsets for the Upper Deck Series One product are done, but the team reserves room for the Young Guns and the Young Guns Canvas cards to be added to the mix late.

After their debut, Upper Deck dispatches photographers to arenas throughout North America to capture the best photography possible of these young prospects making their debut. For Auston Matthews for example, the photo team had to dive into over 275 images of Matthews to pick the shot that would end up being on his first rookie card of the season. And that’s just for one player. There are 49 different Young Guns rookie cards in that set.

Here’s more on that with John Ibriks who is Upper Deck’s manager of photography on what it was like picking some of the photos this year:

After photos are selected and checklists are finalized, the prepress team does color correction on all of the cards and we move into production. The shortened time frame to get these cards completed causes a myriad of issues, but with proper planning, the team can get them manufactured in a couple weeks and added into the mix to be packed out for the biggest hockey card release of the year in Upper Deck Series One Hockey. “October is always a thrilling time at Upper Deck,” said Suzanne Lombardi, Upper Deck vice-president of Operations. “I would compare the process of manufacturing the Young Guns in time to be included in the product pack-out to having to sprint a marathon. The rookies debut in their first official NHL® games, prepress swings into action to get the cards looking great, we print them on expedited time-tables often pulling double shifts and then the cards are mixed in with all the others to be packaged into packs, boxes and cases. Each portion of the process is coordinated in painstaking precision and executed by our team to get those Young Guns cards into our customer’s hands as soon as humanly possible.” For hobby shop owners who sell Upper Deck Series One, the calls start coming in for pre-orders before the season even kicks off. And after Auston Matthews scored four goals in his rookie debut and Patrik Laine scored a hat trick in a memorable come-from-behind victory for the ages against the Leafs, things have only gotten busies and trading cards shops in those markets in particular.

We caught up with Mike Gogal, the owner of Sports Card Connection in Winnipeg and he was very outspoken about how important the release of Upper Deck Series One is to his business, “I postponed surgery because of it. I was scheduled to have cataract surgery on November 9, and then I remembered Upper Deck Series One comes out on November 10. I told my doctor I can’t do it. So now I’ll get the surgery done in January maybe.” Mike Gogal appears in the back with the goatee along with his customers who scored a variety of goodies from Upper Deck during a recent visit. 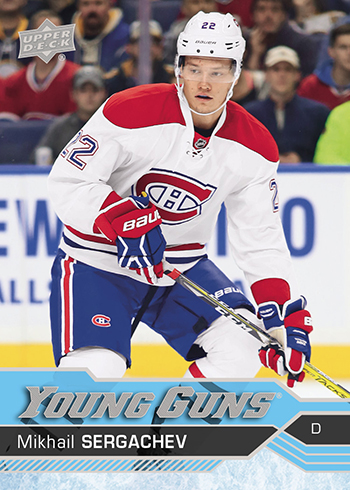 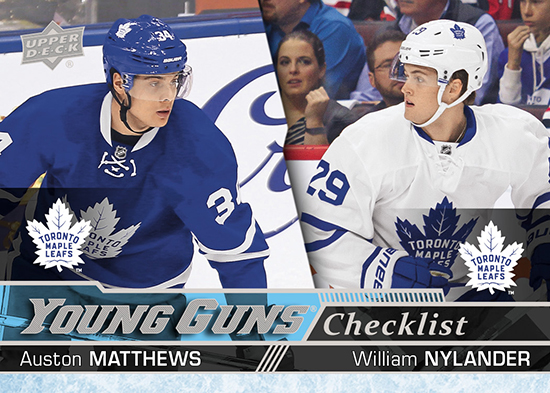 
Why Upper Deck is the #1 Manufacturer? They care about the collector’s needs and make the best and most relevant products. They’ve always been this way. Please – give them back the NBA License!


I love the fact you get pictures of them from actual in-game action. I know most of these players attend the rookie photo shoot and you could easily use one of those pics. Thanks for the extra effort; we notice and appreciate it!