Legendary® – Deadpool Preview: Out for Revenge

At one point or another Deadpool has attacked, killed, or just plain annoyed every other character in the Marvel universe. Every. One. Any guy who has caused that much damage is going to have a very long list of enemies. Enemies that are all out for Revenge.

For Villain groups that have the Revenge ability, each Villain gets +1 Attack for every Villain of that group in your Victory Pile. 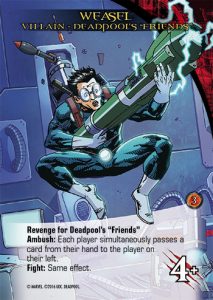 Revenge is player specific. It will change based on the damage each player has caused to a Villain group. If you’ve defeated 2 members of the Deadpool’s ‘Friends’ Villain group then every other member of that group, that enters or is already in the city, will get +2 Attack during your turns. If another player has yet to defeat a member of that group then the group doesn’t gain any Attack. The more damage YOU do, the more that group hates YOU. 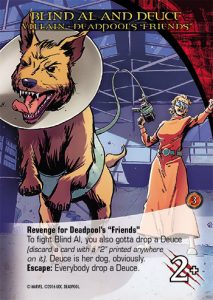 Just to be clear – The legal lines on cards do NOT count towards the printed ‘2’ requirement.

Revenge is not limited to just Villains either. Masterminds can also hold a grudge. Big surprise there. 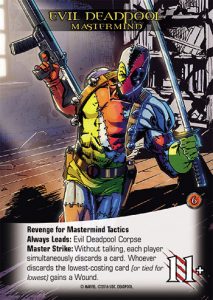